Music by The Haxan Cloak

Plot Synopsis: (via Wikipedia)
Midsommar follows a group of friends who travel to Sweden for a festival that occurs once every ninety years, only to find themselves in the clutch of a pagan cult.

First of all, I think I was too hard on Hereditary. I didn’t rate it very highly at the time, mainly because I thought the end of the film was a silly mess. However, it starts out great and has what I think will be one of the most memorable & shocking horror movie moments for years to come. And, of course, Toni Collette’s performance was fantastic. I’m loving seeing some serious modern horror with brilliant performances (also loved Essie Davis in The Babadook). So, while I didn’t love Hereditary overall, there was still a lot that I did like about it and I have much more respect for it than for the countless cliché modern horror films that get made.

The reason I bring up Ari Aster’s first feature film for comparison is because I feel exactly the same way about Midsommar. I respect the film, there are memorable shocking moments and imagery, and Florence Pugh gives a great performance. But, overall, I can’t say that I loved the film and the ending is possibly even more of a mess than Hereditary’s.

If you loved Hereditary, you’ll love Midsommar. The themes are very similar and the movies have clearly been written & directed by the same person. Aster is off to a brilliant start with these films and I think he’ll continue to be highly respected in the horror genre if he manages a third film along the same sort of lines as his first two. They’re certainly not for a mainstream crowd, however, and will always be more for the serious “film” fans (I don’t think the audiences I saw these two movies with enjoyed them very much). 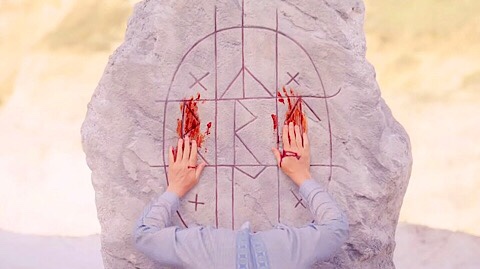 I love divisive films, though, especially in the horror genre. I’ll always have more respect for a movie that says “fuck it” and does its own thing than for the boring & predictable ones that push no boundaries. Hell, I loved Mandy but know it’s sure as shit not for everyone. Aster’s two films are the same way so I can definitely understand why he already has big fans of his work even if I’m not yet sure if I’m a fan or not. I really did want to love both of his films and I kind of did at the start of each one. This is something I always moan about when it comes to horror, though. I swear horror movies rarely know how to end. I find very few horror movies have a satisfying ending and Aster’s two films go off the rails a bit too much for me at the end. But I can say that, based on his previous work, I eagerly await his next movie and fully expect to be equally impressed and exasperated at the same time. And, as always, I’ll prefer impressed exasperation over finding a movie just plain boring. Aster’s films are FAR from boring.

**I’ve had to think about it & let Midsommar sink in for a few days. I fully expected to far prefer Midsommar to Hereditary. I absolutely love the setting and was very much looking forward to a new The Wicker Man (that movie kicks ass). This film looks great, I loved the imagery, and overall I far preferred the look of it to Hereditary. However, I think Hereditary is the better film. I wasn’t expecting to feel that way as Midsommar is more my type of thing. Both movies are intense and leave you feeling quite emotionally drained but Hereditary has an overwhelming sense of dread and fully captures the feeling of grief a bit more effectively than Midsommar. Again, though, both leading ladies give fantastic performances and help elevate these films to something more than just another basic horror movie.

I should also point out that I’m struggling to find the time to write reviews at the moment and have about ten current releases I’ve just not had the energy to review. But I’ve reviewed Midsommar right away, so I guess that says something about it? I have more to say about something like this than yet another superhero movie or yet another animated sequel…

Plot Synopsis: (via IMDb)
After the family matriarch passes away, a grieving family is haunted by tragic and disturbing occurrences, and begin to unravel dark secrets.

I always get very excited when there’s a lot of hype about a horror movie. Horror isn’t exactly my favorite genre but I love the rare occasion when one is actually good. And it is a very rare occasion, especially these days. But I LOVED The Babadook & It Follows and was hoping Hereditary would live up to those as it had the same sort of hype. Umm. No. Damn. I was very disappointed. However, there were some things that I liked about it & it’s still much better than the majority of modern horrors. 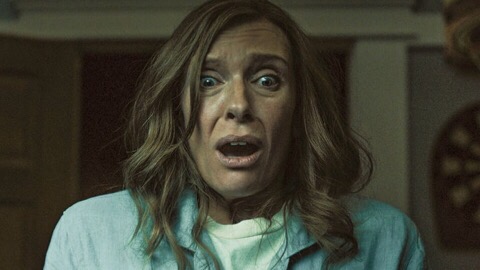 First of all: Yes, the acting is very good. Yes, I like it when horror films have decent acting like in this and in The Babadook. There’s no reason for horror movies to not have good acting & I wish that more of them tried to have actors of a decent standard. Collette is certainly the standout here in what will have been a very difficult & intense role. Byrne also did very well as her husband who tries to keep things together as did Wolff and the young Shapiro playing her messed-up children. I think the acting in horror doesn’t get enough credit sometimes – I’d hate to have played Collette’s role in this! I think it would psychologically damage me for life. However, I felt no connection to this family. I’m not sure why, as the acting was good. For whatever reason, the movie didn’t have me sympathizing with these characters (which will be a big reason why it’ll get a lower rating from me than I was hoping & expecting). Maybe if the son had been likable to begin with… 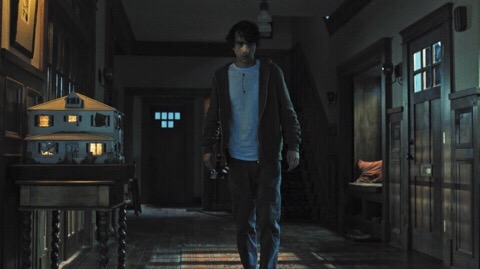 I did like the film’s overall vibe at the start. I really liked the creepy dollhouses/miniatures. I liked that the movie seemed to be going for a Rosemary’s Baby thing, which is a true classic. Hereditary was atmospheric and the sense of dread was palpable. I soooo wanted to like it more. But, as I said, I didn’t care about the family. And then the story went completely off the rails. Now, I don’t mind when a story goes completely fucking nuts. I love David Cronenberg’s films, for crying out loud. I love crazy! But the ending of this just didn’t work for me. It was messy. The whole story just seemed a little too convoluted. That’s horror for you, though – you either love or absolutely hate how they choose to end them. I almost always hate the endings to horror films. I wouldn’t say that I totally hated Hereditary’s ending, but… Meh. It just didn’t quite work for me. To be fair, however, I’m not sure how it should have ended. It did at least end up in the sort of way you’d expect based on things that happened & were said previously in the film (so pay close attention).

Hereditary is a very good horror film compared to the majority of rubbish modern horror films that are out there. I’ve seen modern horror that I’ve liked much much more than this one but I can see why Hereditary has its fans even if it didn’t quite work for me. The film that it most reminds me of is The Witch (2015), which also had great reviews but which I found well-made yet very disappointing. If you loved The Witch, I think you’ll probably like Hereditary too. I prefer Hereditary but that’s mainly because of ONE scene. If not for that one scene, I’d give this at least half a point less. You know the scene I mean if you’ve seen this! That scene was totally unexpected. Well, no… Not entirely unexpected as it was obvious something was going to happen where it did. But it was a ballsy scene and changed the way you thought things were gonna go based on the marketing. So, yeah – an extra half a point at least for a horror movie having a scene that actually managed to surprise people.