Plot Synopsis: (via IMDb)
An adaptation of the 1957 musical, West Side Story explores forbidden love and the rivalry between the Jets and the Sharks, two teenage street gangs of different ethnic backgrounds.

I thought this film looked gorgeous. Steven Spielberg is a brilliant filmmaker so of course it was going to be good. Was it necessary when we already had a very good film adaptation in 1961 (which I briefly reviewed last month here)? Probably not, but I suppose it brings it to the attention of a whole new generation plus I think it fleshed out the story a tiny bit more. I still prefer the 1961 film as I like Natalie Wood & go for the more classic feel of that one, I guess. But it was never an absolute favorite of mine when it comes to movie musicals & it still wouldn’t make my top ten (but I did give it an honorable mention in this old list I need to update).

The weakest part of the film was unfortunately, for me, the two leads. Ansel Elgort had no charisma. Rachel Zegler was good but also kind of just a pretty face in a role that probably could’ve been filled by plenty of young actresses. That sounded way too negative! She was good. It was just unfortunate that there was zero chemistry whatsoever between her & Elgort. But, hey – I’d probably say all these exact same things about the 1961 film too. Made it harder to buy into this great big romance in both films.

Spielberg’s version of West Side Story is a very good film and I’m happy if it’s made some younger people get into musicals. But I’ll probably still stick with the 1961 film if I feel in the mood for a rewatch at any time. The songs are still the same either way (I think?! I’m no expert on this as I’ve not watched it multiple times like other musicals). But I did enjoy seeing Spielberg’s lovely vision of this. 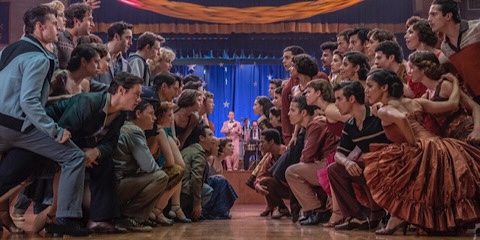