Here are two reviews for the only two films I’ve seen in the cinema in the past two months. Help!!! I want to go to a grown-up movie again someday! 😦 Well, at least one of these was good… 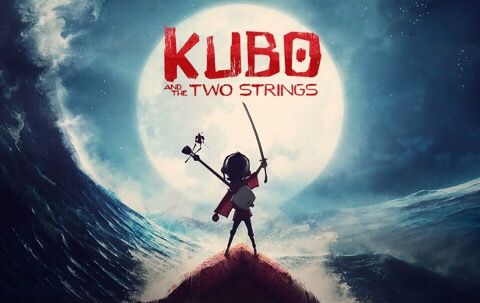 Plot Synopsis: (via Wikipedia)
The film revolves around Kubo, who has magical powers and whose left eye was stolen. Accompanied by Monkey and Beetle, they must subdue the Sisters, Raiden the Moon King and his army of evil spirits.

Yep – As you probably guessed, this is the good one of these two films. We went to this as a family and all really liked it but, of the three of us, my hubby is the one who loved it the most. He’s a big fan of stop-motion animation (probably thanks to growing up on Ray Harryhausen films) and seems fascinated by the behind-the-scenes stuff that Laika put in their end credits.

Of the Laika films so far, ParaNorman is still possibly my personal favorite but Kubo is a very close second and the one I’d actually say is their “best film” so far. I hated The Boxtrolls (can’t win them all!) but the animation was fantastic as always. I admit to falling asleep in the middle of Coraline years ago & never going back to it but that’s been due to lack of time more than lack of interest. I really should finish that one but will wait until I think the kid is old enough to watch it with me (what I saw was kind of creepy – what age would you guys recommend on that one?).

As with other Laika films, Kubo And The Two Strings is dark, serious, and slightly intense. It’s one you’re obviously not going to bring a three-year-old to or to watch for the simple, silly giggles like you get out of something like Trolls. Laika doesn’t need to make those sort of films, though – we already have studios such as DreamWorks for that. As a (admittedly sometimes too snobby) fan of film, I have a lot of respect for Laika (and Pixar) making true art for kids & grown-ups alike and for never dumbing things down for their younger audiences.

As a lover of Studio Ghibli & a lot of Japanese films, I loved the setting & vibe of Kubo (although, of course, it’s voiced mostly by American or British actors). That’s my only small complaint about the film – the voices of Charlize Theron, Rooney Mara & Matthew McConaughey don’t exactly give this film a genuine Japanese vibe. But, well… it was made in the West & we speak English, so…

Anyway – I don’t want to take away from the film as it’s a lovely work of art with an original & unique story. No, not all kids will love it and you might not want to let anyone too young watch it (mine is seven & she really liked it, though not as much as the Studio Ghibli films she’s seen. Yes! I love my kid). 😉 I’d say minimum age of six on this one but, as always, it depends on each individual kid. The evil Sisters & Moon King are quite frightening and Kubo’s eye is stolen for crying out loud (this isn’t shown)… Actually, yeah – this one is pretty scary come to think of it. But there are still light-hearted moments and my daughter seemed pretty taken with Kubo, Monkey & Beetle, who are strong main characters.

I want to give this movie a slightly higher score as I think it’s very good but there’s also something missing that I can’t quite put my finger on. I think I just have yet to fully connect with any of the characters in Laika’s films in the same way I have with so many Pixar characters. I don’t get the same sort of wave of emotion that I do while watching the best of Pixar or Ghibli but I think Laika is coming closer to someday achieving that same level of genius. I feel kind of the same about this film as I do Song Of The Sea, which I also watched recently. That was absolutely gorgeous to look at but I didn’t “care” as much as I’d hoped to while watching it. Still, Kubo is another step in the right direction & I look forward to future films from Laika. 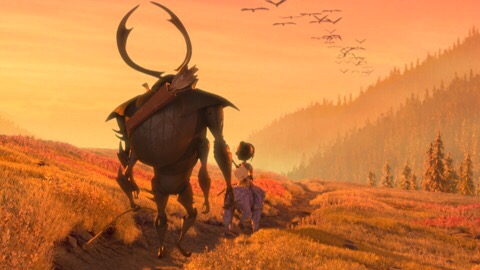 Plot Synopsis: (via Wikipedia)
The film revolves around two trolls on a quest to save their village from destruction by the Bergens, creatures who devour trolls. 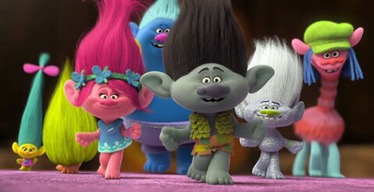 Kids’ films are hard to review, which is why at one point I tried to review Cinderella (2015) in a way where I gave my daughter’s opinion as well as my own (and hubby’s – he’s actually as big of a movie nut as I am). This was because I was accused of taking kids’ films too seriously in one of my reviews and I actually got quite upset because it was a time when I cared what people thought of me. Not anymore! 😉 Screw that. I’m a movie-blogging-asshole with strong opinions & feel that even “kids’ films” should maintain certain standards. Hell, they’re even more important since what they teach (and too often preach) is going to have an impact on impressionable young minds. Which brings me to Trolls…..

I have no idea how to review this because it seriously SUCKS but my daughter LOVED it! Hahaha! I’m so conflicted!!!! My snobby self wants to trash it but, in all honesty, it’s one of my favorite trips to the cinema in ages. She giggled like crazy through this entire glitter vomit nightmare and it made me so happy that I wanted to cry. What’s better than seeing your kid happy?! So, um… Hmm.

Trolls! Ugh. Well, this movie was pretty much what I expect from DreamWorks. DreamWorks has made loads of highly successful films and I respect that as it’s far more impressive than staring at spreadsheets all day like an un-artistic loser like me but I’ll never see their films as anything more than “movies for kids”. There’s nothing wrong with this and I’m glad they’ve made so many kids happy but I prefer family films that appeal to young & old alike. And so you don’t think I’m a grumpy old fart who can’t just shut up & enjoy a simple kids’ movie, I do like some DreamWorks (I should do one of my annoying top tens! The Kung Fu Pandas & Monsters Vs. Aliens are probably my favorites while my kid seems to like How To Train Your Dragon & that weird Puss In Boots).

Trolls! Is it obvious I don’t feel like reviewing this??? Let’s see… Poppy was very cute. My daughter loved young Poppy at the beginning of the movie and, while she went too annoyingly cute at times, the character mostly stayed on the right side of the sickeningly sweet line. The kid also loved that she’s voiced by Anna Kendrick since she knows her as the Cups song girl. She also likes Gwen Stefani, who was completely wasted in a tiny role in a movie so full of music.

Speaking of music, Trolls took a lot of GREAT songs and ruined them. Again, I’m conflicted as they had the good taste to pick songs by artists such as Gorillaz & Justice (!!!) but then ruined them by turning them into dumb songs about troll hair (!!!!!). Oops – I’m being bitchy again. But I thought the hubby was going to either cry or scream & run out of the cinema when the Trolls version of Donna Summer’s I Feel Love started up… Lol! (You think I’m a snob? He’s far worse than I am). To be fair, the movie’s Cyndi Lauper True Colors scene wasn’t bad. And, hey – I think the Justin Timberlake song, Can’t Stop The Feeling, is a genuinely good song and the one thing from this film that will stand the test of time. It got the biggest reaction from kids in the cinema (some even cheered). I said something positive! Yay me! Oh, I also kind of liked the cloud dude. He was weirdly funny. My daughter didn’t like him, though – she looked at me like I was a weirdo when I said he was my favorite character. He looked stoned:

Trolls! They look nothing like the classic Trolls we grew up with. That’s annoying. I want my kid to have a genuine ugly, naked troll doll – not these pink, sparkly cartoon versions! Dammit. At least the classic ones have a brief cameo, I guess. The bad guys in this, the Bergens, were stupid & got on my nerves but at least they made me like the Trolls more. Hey – there’s another positive. Yay me! I’ve said some good things about this movie! Justin Timberlake’s character wasn’t too bad, mostly since he had the right attitude (not an asshole Bergen but not annoyingly happy like the other Trolls).

This review is too long & I’m bored. I was going to write one paragraph & be done with it. Ha! I do ramble on when I’m being bitchy. Sorry about that. Trolls! It sucks but your young kid will probably love it and seeing your kid smile will melt your frozen heart (Anna/Elsa-style!). But those goddamn troll-hair songs will still make you cringe…

**Okay – I admit I was in a horrible mood when I wrote these reviews. Yesterday, however, I watched my first proper grown-up film in months and MAN was it a good one!!! So I’m slightly less grumpy now. 😉 I’ll try to review that film tomorrow…. (it was Arrival, FYI)