This guest review for the John Hughes Blogathon comes from Anna of Film Grimoire. Thanks for the reviews, Anna! Let’s see what she has to say about Baby’s Day Out. 🙂

I chose this film for this amazing John Hughes blogathon because my partner watched this film over and over again as a child and still insists, to this day, that it’s one of the best childhood films ever. I watched it with him, and attempted to see it through the eyes of a child.

Baby’s Day Out (1994) follows the exploits of Baby Bink who is captured and ransomed by three criminal buffoons, one of whom is played by Joe Mantegna (think Fat Tony from The Simpsons). However, Baby Bink is much smarter than the three crims assume and evades capture in various locations that feature in his favourite book. The film is constructed around these various locations and contains a whole bunch of slapstick humour. John Hughes both wrote and produced this film.

In terms of the cast, Lara Flynn Boyle plays Baby Bink’s worried mother with a refined sense of superiority. Cynthia Nixon plays the baby’s nanny (with a bad British accent) who looks after him and spends time with him, often whilst reading his favourite book. Joe Mantegna is great as the leader of the three criminal idiots, and his delivery of lines is sometimes hilarious. Case in point, “That little doo-doo machine is my retirement money”. Imagine that line in Fat Tony’s mafia voice from The Simpsons. Instant hilarity. His acting is good, and is an appropriate level of villainous for kids to both enjoy and feel mildly threatened by.

It’s easy for an adult watching a kids film to say, “This is stupid and predictable”. Initially I felt that way, but then I attempted to see it through the eyes of a child under eight (because I’m assuming this is the intended audience). The dialogue is predictable, but it’s a kids film – it’s not for cynical adults. I think kids would enjoy it a lot. Kids have much more of a robust suspension of disbelief than adults, so I think they would find humour in the crazy exploits that this adventurous baby gets up to. For me, I was constantly worried the baby was going to fall off a building and harm itself. Kids would probably also find the chase sequences thrilling and funny. 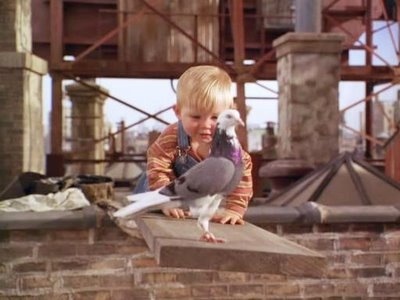 I mentioned slapstick humour – this film has at least four ‘kick in the nuts’ jokes, and one instance of Joe Mantegna’s nads being set on fire for an extended period of time. Kids respond well to slapstick comedy, at least I know I did. There are also lots of poop jokes, which are always hilarious regardless of your age. During these comedic moments, the baby almost acts as the laugh track so the audience can know what’s funny. Whenever something comedic happens, the baby’s cheerful laughter and giggling can be heard.

I have to confess that I fell asleep once during the construction site scene. I almost feel sorry for any mum or dad who took their kids to see this in the cinemas because it must have been very tedious for them. To the baby’s credit, he is very clever and has a knack for survival. In my adult brain, I wanted to discuss the themes of class division and privilege that this film displays. But kids don’t care about that stuff as long as people are getting kicked in the junk. Ultimately, Baby’s Day Out is a funny film for kids, but not so much for adults.