This is one of those movies where I’m glad I waited a couple of weeks before reviewing it. If I’d written it while still on a “high” just after seeing it, I’d have rated it too highly. It’s a fun film. I like Queen and of course love Freddie Mercury (I did a list of My Top Ten Queen Songs HERE). Who doesn’t love Freddie?? He’s a legend and I miss the days when we had proper performers like him. And Bowie. (I’m still not over being upset about Bowie’s death either!). Anyway, this film was a lot of fun but it’s not going to be an all-time classic. It’s somewhat disposable and, while Rami Malek did well, it’s not an Oscar-worthy performance. I never really felt like I was watching Freddie Mercury. (Sorry!) 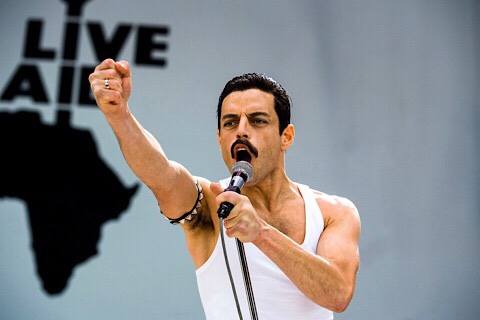 I can see that this film is similar to The Greatest Showman: audiences love it while critics have been harsh in their reviews. It’s easy to understand why it has fans. It’s great hearing all of Queen’s biggest singles and witnessing the creation of Bohemian Rhapsody was an absolute joy (whether or not it was accurate – I have no idea). And as a huge fan of Wayne’s World, I personally adored the fact that they had Mike Myers playing a record executive who hated their weird opera song. Brilliant. 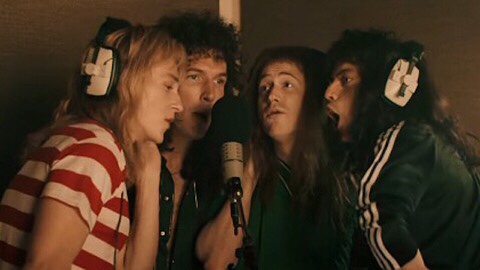 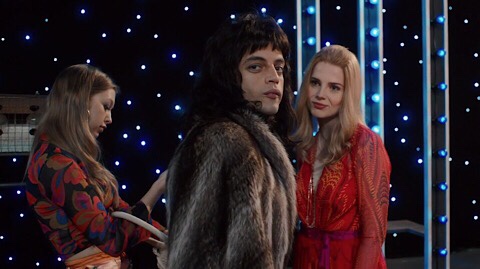 Rami Malek may not exactly feel like Mercury but, to be fair, I don’t think anyone could ever do Mercury justice. Malek was still very good & fun to watch. I think credit hasn’t really been given to the rest of the band in the film, though. Gwilym Lee was especially good as Brian May. However, what I possibly enjoyed the most was seeing Freddie’s relationship with Mary Austin. I knew of her but knew very little of their relationship. I was glad that there was so much focus on her as she was such an important part of his life and I thought Lucy Boynton was great. Again, I think she’s probably not been given enough credit but, to be fair to Malek, it’s probably much easier playing a character who isn’t as well known as Mercury. I also liked her a lot in the fantastic Sing Street so she’s definitely one to watch.

I haven’t read any reviews so don’t actually know what negative things the critics are saying but I do know they like a gritty drama when it comes to biopics and Bohemian Rhapsody certainly isn’t a gritty drama. The movie feels very watered down. It’s a very “family friendly” version of the life of a rock band. Come on – where was all the raunchy sex?!?!? I don’t really mind when Hollywood movies do this, though. If you wants facts, watch a documentary or read a book about Queen. This movie is pure entertainment. As long as you know what you’ll be getting if you watch it, you should enjoy it if you like Queen’s music and just want to know a little bit about the band (but mostly Freddie). It’s a fun movie but not a great film. That was fine with me since I just wanted some light entertainment anyway. 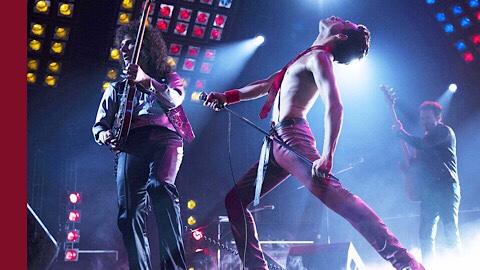 I definitely have to end with the Wayne’s World clip… 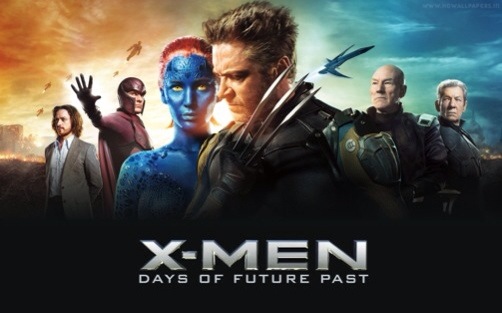 Plot Synopsis: (via Wikipedia)
The story, inspired by the 1981 Uncanny X-Men storyline “Days of Future Past” by Chris Claremont and John Byrne, focuses on two time periods and Wolverine being sent to 1973 to save the future of mutantkind.

Review number 3 from my 4-Movie-Marathon from last week! I still say Edge Of Tomorrow was by far the best, A Million Ways To Die In The West was last (but still fun). I really thought Days Of Future Past would be my favorite but, unfortunately, it was a not-very-close second…

I’ll say it for the millionth time (hey – you never know when I might get a new reader here!), I enjoy comic book movies but have no knowledge of the comic books themselves (well, I read Watchmen but that’s it). When the X-Men movies came along, I LOVED them. I thought the characters were great & they just felt very different to a lot of other comic book movies that had come before them. Plus… Patrick Stewart & Ian McKellen! Those two are fucking legends. Love them love them love them!!! They’re still my two favorite characters as well so, don’t get me wrong – it was wonderful seeing them together in this. And I think James McAvoy & especially Michael Fassbender are perfect as the younger versions of these two greats. So no complaints when it came to the scenes involving either generation of these two characters – those were my favorite bits. (And god Michael Fassbender is sexy).

Wolverine was… Fine. Maybe I’m just a bit Wolverined-out (and I’ve not even seen The Wolverine yet – the only one I’ve missed out on). Hugh Jackman is still great but he just wasn’t my favorite character in this one. (And was he always so veiny?!). I liked Quicksilver and a couple scenes with him were probably the highlights of the movie. I don’t really have any complaints about Jennifer Lawrence in this and I liked Peter Dinklage (hey! I’ve finally made a start on Game Of Thrones, people! DON’T TELL ME ANYTHING! I’ve only seen 4 episodes!). So… All these things I’ve mentioned were good. Or at least okay. But………..

I thought the story was a bit of a mess. Sorry! Sorry! I’m sorry! Don’t hate me because I’m beautiful! (Lol – you may all be too young to get that reference). Like I said in my Edge Of Tomorrow review, that film had the more complex plot yet it managed to pull it off nicely whereas Days Of Future Past just felt totally convoluted. I didn’t really think the future scenes worked at all & it kind of threw me out of the film whenever they’d go back to those scenes. But without them, there’d have been no Stewart & McKellen, so… that would have sucked, I guess. I just wish those scenes had worked better.

Plus there were these new characters thrown in there that I didn’t know and they weren’t introduced at all so they meant nothing to me as I don’t read the comic books. We got zero character development on the new “future” characters yet we’re meant to care about their fate (well, Storm was there but who actually likes Storm??). Also, I often get a little annoyed at “time travel” in movies that aren’t actually ABOUT time travel. Or aren’t sci-fi. Well let’s just stick time travel in any ‘ol movie then! So, the overall plot here is what didn’t really work for me. I still love these characters. I still love the X-Men universe. This movie certainly isn’t the worst of the X-Men films (I’d personally place it as the fourth best) but it was a weaker entry than I was hoping it would be.

For today’s IMDB Top 250 guest review, we have Lisa of Culturevultureexpress. Lisa got very excited about my IMDB Top 250 project and immediately grabbed a bunch of excellent films to review. Thanks again for joining in, Lisa! 🙂

Now over to Lisa to see what she has to say about The Usual Suspects, IMDB rank 26 out of 250…

The Usual Suspects was a 1995 slick, intense and perfect crime-thriller. With an All-Star cast which included Kevin Spacey, Gabriel Bryne, Chazz Palminteri and Pete Postlethwaite, the plot, written by the amazingly talented Christopher McQuarrie, was dramatic as it meandered its way through deceit and mystery.

Directed by Bryan Singer, the film centres around Roger “Verbal” Kint, a cripple, and his recalling of events through flashbacks while he is been questioned by the cop Dave Kujan (Palminyeri) after been found at the scene of a drugs heist which has gone drastically wrong with only Verbal and a hospitalized Hungarian crewman and criminal been the only survivors. The drugs belong to the mysterious Keyser Soze, the hero of a children’s horror. Soze is said to have killed his family to show some evil men how determined he was when they threatened his family in a bid to get to him. His name even scares really tough men. He tells how there was a truck hijacking where five suspects including Verbal were arrested by the police. They are a mixture of criminals Dean Keaton (Byrne), Fred Fenster (Benicio Del Toro), Todd Hockney (Kevin Pollak) and Michael McManus (Stephe Baldwin).

Much of the mystery of the story revolves around the identity of Keyser Soze who is a violent mobster who has set these criminals on the path to their deaths with the help of
Mr. Kobayashi (Postlethwaite), Soze’s wing-man who becomes a possible suspect to be Soze due to his cruel and sinister demeanor.

This film is famous for it’s ending and rightly so. I won’t give away the ending. All I will say is that it is the best twist in film history as far as I’m concerned.