Based on Characters by Derek Kolstad

Plot Synopsis: (via IMDb)
Super-assassin John Wick is on the run after killing a member of the international assassin’s guild, and with a $14 million price tag on his head – he is the target of hit men and women everywhere.

Oops. I just realized it’s been 2 weeks since I saw this movie and I’ve not yet “reviewed” it. I’m struggling to find the time these days but I like to at least say a little something about the cinema releases that I see. Oh crap… I’ve not yet reviewed Detective Pikachu either! Ha! Maybe I’ll do that next. I’d rather talk about Keanu.

Keanu Reeves. I love him. Who doesn’t?! Anything you ever read about the guy is positive. He’s one of the very few truly likable movie stars. I sometimes feel a bit annoyed at everyone jumping on the Keanu bandwagon. He’s a star from my generation, dammit! Us Gen-Xers have always known he’s awesome. Point Break and Bill & Ted’s Excellent Adventure kick ASS. Even more so than John Wick. I of course did My Top Ten Keanu Reeves Movies HERE. I was maybe a bit rough on John Wick, which I haven’t ranked very high but that’s mainly because Reeves has just been in a lot of really good films. It’s a very solid Top Ten. He deserves more credit!

I’ve enjoyed the John Wick series and think the franchise, as a whole, has gotten better with each film as we get to know these characters a bit more each time. He’s a great character but I think that’s honestly thanks to Keanu, who gives Wick a humble vulnerability that I don’t think most of the bigger name action stars could manage. I can’t see a different actor in this role. I also love the world that these films have created. This secret assassin underground with their fancy hotels and strict rules is cool as shit. Parabellum is also probably the most stylish one yet with a fantastically over-the-top setting for the film’s final battles. All that glass! Hilarious. It was so obvious they were going to smash the shit out of that place. These movies truly are ridiculous but that’s what makes them fun. John Wick isn’t exactly trying to win any Oscars. 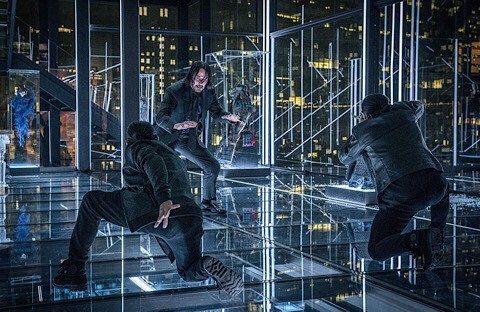 I will say that the violence in these films is a bit too much for me personally. I’m not anti-violence in movies but I’m a total wuss and had to look away so often that I probably missed half of this one. It’s the whole point of these movies, though, so it’s not an actual complaint – it just helps keep the John Wick movies from ever being absolute favorites of mine. Point Break is more my speed. Ha! SPEED! Yeah, Speed is more my Speed too. I’ll just always find it funny how desensitised the world is to violence. This is rated 15 in the U.K.! How is it not an 18? It’s excessively violent. Yet a tiny bit of sex, swearing, and a naked boob will get an instant 18. “Oh my god, a nipple! That’ll have to be rated R!”. The world is so fucked up.

My only complaint about this one is the ending. So, this might be a SLIGHT SPOILER (but not really as John Wick 4 has already been announced): The cliffhanger ending and obvious setup for the sequel annoyed me. This series would’ve been PERFECT as a trilogy. Had there been a proper ending with some sort of closure for our dog-avenging assassin hero, I’d rate this film and well as the series as a whole much more highly. I miss the days of a good, solid trilogy. I’m sick of this trend of never-ending sequels. It lessens the impact of the movies as the sequels often get worse and more desperate. Know when to stop, Hollywood! I’m also still thoroughly annoyed that another Toy Story is coming out and I absolutely love Pixar and watch everything they make. But that trilogy was perfection. So I can’t bring myself to give John Wick 3 any higher than 7.5/10, which is what I gave the previous two films. Had Parabellum given us (as well as Wick’s character) a well-deserved finish, I’d go back and give all three films a higher rating. After these three movies, which have gotten a little more “enjoyable” each time as they go more & more over-the-top (in a fun way), I now have to say that I think the first one is the best as I liked its simplicity. I’m sure I’ll begrudgingly watch John Wick 4 as well as Toy Story 4 but they’ll both have to do something seriously amazing to impress me. I have very low expectations for them.

Keanu Reeves is fantastic, though. He IS John Wick. He’s perfect for this role and 100% the reason why I continue to watch these films. He deserves way more credit for bringing this character to life as I honestly think this series would be a bit dull and far less loved with a different actor.

**Oh, I loved Anjelica Huston & Halle Berry in this too. Forgot to mention that!