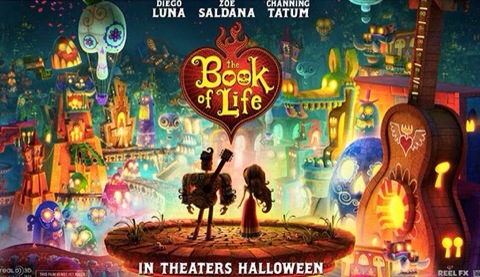 Plot Synopsis: (via IMDB)
Manolo, a young man who is torn between fulfilling the expectations of his family and following his heart, embarks on an adventure that spans three fantastic worlds where he must face his greatest fears.

Hmm. I liked this movie and did think it was lovely to look at (but was probably a bit “too much” visually – they could have toned it down). As an adult, it’s not always fun sitting through kids movies but I enjoyed the story well enough in this and didn’t just want to sleep through the whole thing like I pretty much did during the horrible Boxtrolls movie. The problem with this one, though, is that I think adults may almost enjoy it a bit more than really young kids as I think the story is too confusing for those under maybe 8 or so. There’s no reason that younger kids can’t go to it – I just think they won’t like this one as much as it’s very fast paced, the story is too complex, and it’s just very “busy” – you’re constantly bombarded with the visuals, the story, the songs… I found it hard to keep up myself so I doubt a five-year-old really could.

As I said, I did quite like the story. It’s actually told as a story that’s being told to a group of kids at a museum and I wasn’t sure that would really work at first but it wasn’t too bad – it just made it a bit harder to get into the characters who are in the “story within a story”. I put the very simple plot synopsis at the top but here it is from Wikipedia in much more detail to show you exactly what the central story is about (although, as I said, it’s more complex than this):

The spirits La Muerte, ruler of the Land of the Remembered and Xibalba, ruler of the Land of the Forgotten, appear at the San Angel’s Day of the Dead festival where they set up a wager after seeing two boys, Manolo and Joaquín, competing over a free-spirited girl named María. La Muerte bets that Manolo will marry María, while Xibalba bets on Joaquín. If La Muerte wins, Xibalba can no longer interfere in mortal affairs, but if Xibalba wins, he and La Muerte would switch lands. 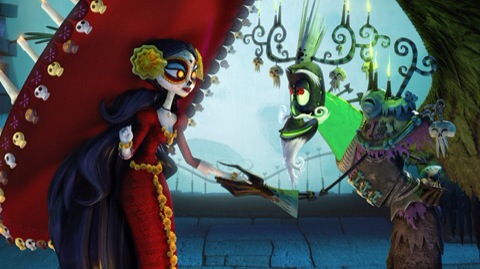 The girl in this is pretty good – she’s feisty and when the boys are fighting over her says something like “I belong to no one!” so I was all for that as too many female characters in kids movies are horrible role models to young girls. Her pet pig was pretty adorable and there weren’t any annoying or unlikable characters.

The jokes in this are actually somewhat funny, even for the adults (well, one joke was SO dirty that the hubby & I looked at each other in disbelief! Don’t worry, though – your kids would NOT pick up on it. Just don’t laugh at it if you can help yourself. I couldn’t help myself…). There’s also a lot of music in this film which was sometimes fun as they did some popular stuff. Although I wasn’t sure if I should think it’s cool or if I should be pissed off at them doing Radiohead’s Creep… But, hey – it’s the first time I’ve heard Biz Markie’s Just A Friend since 1989! 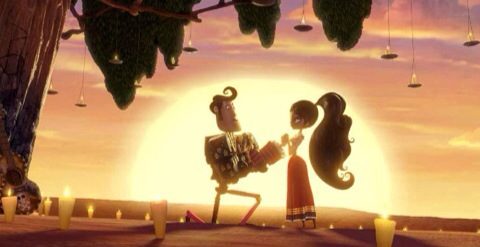 The Book Of Life is a decent enough film that adults probably won’t mind sitting through as well. I do think it’s too complex for the very young but, aside from one dirty joke they won’t get anyway, I wouldn’t say there’s really anything inappropriate for kids (other than maybe the issue of “death” being discussed but you get that in most Disney movies anyway). Obviously, it’s not Pixar or Disney so it’s still just a kids film to me & I never rate those as highly as I’d rather watch a grown-up movie. I liked this okay, though, and think most kids of at least 7 or 8 probably will too. 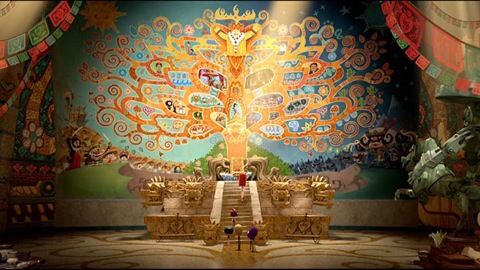 Here’s some Radiohead for Cara. 😉 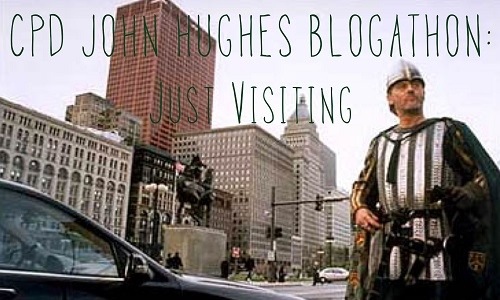 This review for the John Hughes Blogathon comes from Josh of JJames Reviews. This is his second review after Mr Mom. Thanks for the reviews, Josh! Now let’s see what he thought of Just Visiting. 🙂 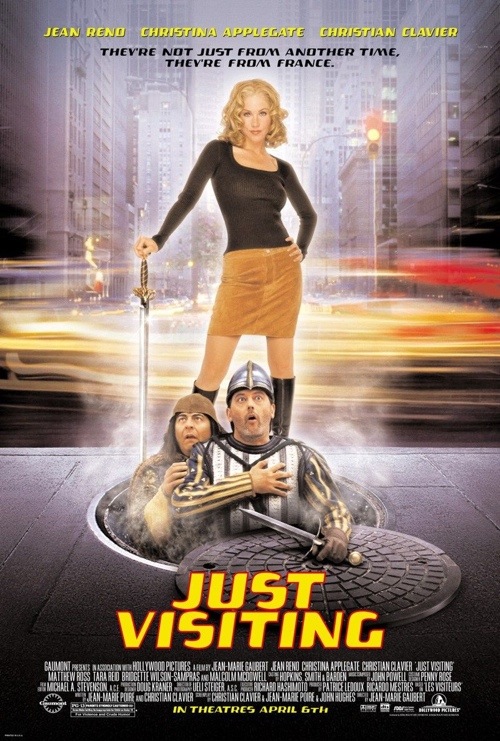 In the middle ages, a wealthy nobleman, Count Thibault (Jean Reno), is poised to marry the princess Rosalind (Christina Applegate) and live his days happily, but witchcraft forces him to kill Rosalind before their nuptials. In an effort to undo the sorcery and revive his beloved, Thibault and his peasant servant, Andre (Christian Clavier), enlist the help of an aged Wizard (Malcolm McDowell). But the Wizard’s spell goes horribly wrong, and Thibault and Andre find themselves transported to the twenty-first century. 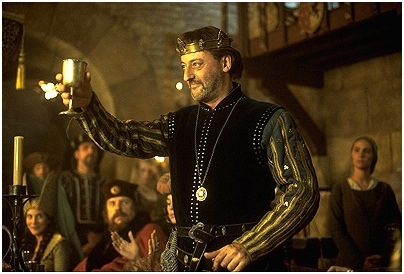 First, I would like to thank Table 9 Mutant for allowing me to participate in her John Hughes’ Blogathon. Second I woud like to ask her . . . how did you let me pick such a terrible movie? Just . . . Just . . . How? ​

What, precisely, is wrong with this film? The better question: what isn’t wrong with it? 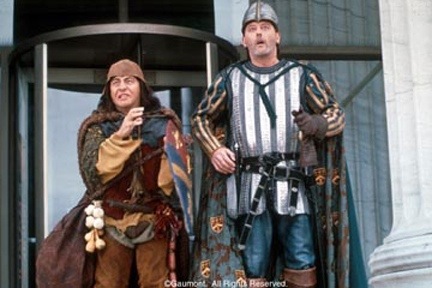 Let’s get more specific. Time travel is a tricky subject in fiction; it needs to make enough internal sense as to not bog down the project with confused questions. Equally problematically, it needs be simplex enough as to avoid inevitable contradictions once it is defined too much. By keeping time traveling mostly unexplained, Just Visiting manages one-half of this tricky formula, but it stumbles on the other half. As just one example, Thibault has a modern day descendent, despite the fact that he murdered his fiancée and was thereby sentenced to death, all before he conceived a child. How is such a thing possible? How did the man produce children? Just Visiting never bothers to explain. 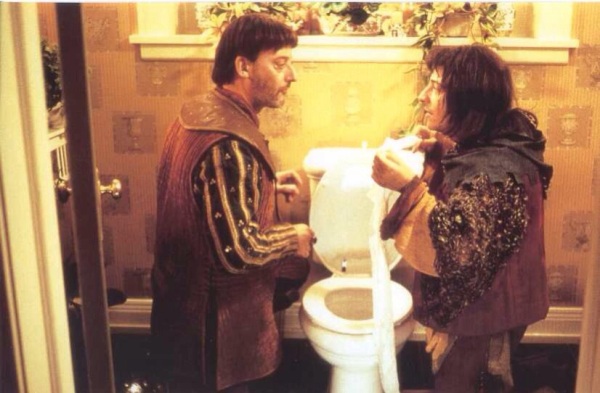 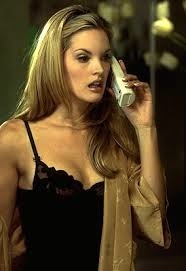 Of course, time travel is a minor issue in comparison to the film’s failed attempts at humor. The best comedians understand that jokes generate laughter once, maybe twice, before growing stale, but such simple concepts escape Writer/Director Jean-Marie Poire and Co-Writers John Hughes and Christian Clavier. Thibault’s mistreatment of Andre is repeatedly played for laughs, which might have been fine, if the Count had occasionally varied his style of abuse, or even his insults. Ditto that for Thibault’s and Andre’s misunderstanding of modern conveniences (toilets, bathtubs, cars, etc). Because the jokes are never more than recycled versions of themselves, Just Visiting’s humor quickly grows tiresome, making this comedy decidedly not funny. 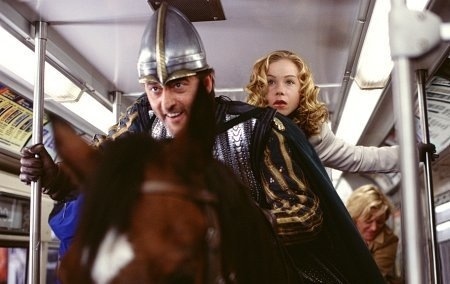 Given that this film’s humor fails, its attempts at drama better save it. They don’t. Partially because all of the characters, most especially Amber (pictured above), are archetypes with little to no depth. We do not care about these individuals, because they do not have personalities. Instead, they have one or two traits each. For that reason alone, when Julia and Andre stand up for themselves and eventually receive their rewards, we are not moved, a fact that mightn’t be problematic if Just Visiting were actually funny (see above).

John Hughes’ screenplay, in other words, is bad. In fact, between terribly developed characters, repetitive humor and senseless plot devices, it is an utter disaster.

So are most of the performances. Jean Reno never strikes the proper balance between slapstick comedian and straight man, and Christian Clavier’s comic turn is too over the top. Bridgette Wilson fails to do anything memorable with the terrible character she’s given, and Matthew Ross is wooden as the movie’s primary antagonist.

Only Christina Applegate and Malcolm McDowell rise above the material. When playing Julia, Applegate is good enough to almost make us forget that her character is no better developed than anyone else’s. McDowell, too, makes the most of limited screen time, if only because he is suitably exaggerated.

John Hughes does not redeem himself with Just Visiting. Like most people involved in making this movie, he ought to have been ashamed.