I’d never seen any Pink Panther movies before watching this a few months ago. I figured it best to start with the first one. I also have no experience with Peter Sellers beyond Dr Strangelove (which is awesome). So, I’m probably the worst person in the world to review this. Or… Maybe the best depending on how you look at it! I’m a virgin to Clouseau. (Huh?)

I have to make these reviews shorter or I’ll never finish up my 2013 movies in 2013. I enjoyed The Pink Panther. It’s SO of its time, though! A young person today wouldn’t go for this swinging 60s film. The pace is VERY slow and we get this long musical number in the middle of it that I fell asleep during at least three times so I had to keep rewinding. I admit that I watched this over a couple of nights – it does get dull in places (Oh no! It’s a classic! Have I pissed anyone off??).

This is deservedly a classic, though. It has a great 1963 look & feel plus, of course, it brought us the (some would say genius) character of Jacques Clouseau. And the Henry Mancini score MUST also be mentioned – who doesn’t know The Pink Panther Theme?! Finally, this movie also introduced us to the cartoon character of The Pink Panther in a fantastic opening credits segment (I’ll put the YouTube link to that at the end of the review). The Pink Panther diamond got its name because it’s a large pink gem that has a small flaw resembling a panther. The camera zooms into the diamond and the cartoon panther comes to life for the credits. Honestly, this was probably the best part of the whole movie to me. No, I didn’t know before seeing this JUST how the cartoon character had come to be. 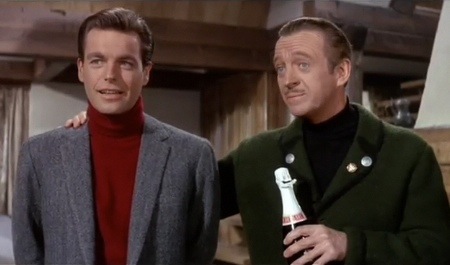 So, already, this movie is very iconic thanks to Clouseau, the score & the opening credits. But David Niven, Robert Wagner, Capucine & Claudia Cardinale are also fabulous in this so I don’t think ALL credit can go to (some would say “the comedy genius of”) Peter Sellers. I especially liked the strong female leads! How refreshing. Of course, they’re naturally extremely sexy compared to the average looking older men, one of whom is a bumbling idiot (other than Robert Wagner who is REALLY handsome. Wow – I’d never seen him so young!). This never really changes in Hollywood – the women are always more attractive but at least these two women are very clever & strong lead characters. God, they really are sexy, though. Am I going on about this too much? I’m starting to worry myself a little. Honestly, women were SO much more attractive in the old days… Here they are – one hot & sultry and one cool & classy (give me this over Megan Fox any day):

This screwball comedy won’t be for everyone but it’s a great slice of the 1960s and very much worth a look for anyone who loves film & wants to experience the best from each decade. 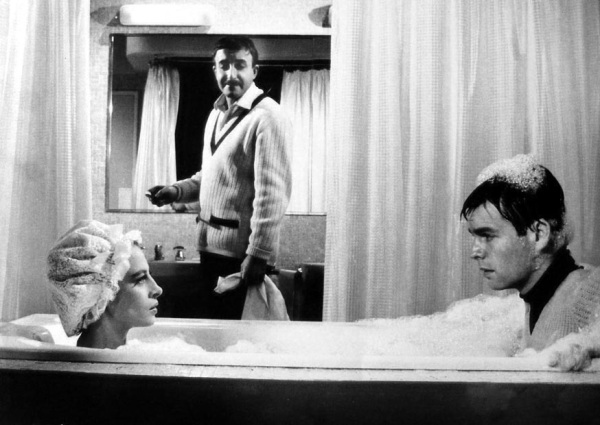 Plot Synopsis:
There are loads of cowboys and they shoot people and move their eyes from side to side a lot like those cool old cat clocks (I’ve always wanted one of those!). And Charles Bronson’s character is super cool & simply named “Harmonica” because he plays this groovy little tune over & over on his harmonica. And there’s a sexy prostitute all the cowboys want to either have sex with or kill so they can steal her land. I think. And the score was done by Ennio Morricone so the music is of course incredible.

This is the 20th movie I watched this year for my IMDB Top 250 Challenge. I’ve said it before but the thing I’m really not looking forward to is watching the loads of war movies & Westerns in the Top 250. So I decided to tackle a war movie first. And you know what? It was fantastic! (The Bridge On The River Kwai. Review HERE). So after that I decided to watch this, my first proper Western EVER. And…Okay, it was pretty good! It was no Kwai but it was still good.

I’ll make this “review” very quick. I’m not going to pretend I know a thing about Westerns or Sergio Leone or any of that. I know nothing whatsoever about filmmaking. But I know this film was beautiful to look at. I know Ennio Morricone is a genius and the music stayed with me for days. I know the opening scene was brilliant. Okay – it consisted of these cowboys just standing around and moving their eyes like those cat clocks and looking all intense but it was super cool. And Charles Bronson was also super cool as the mysterious harmonica-playing cowboy. I admit I got a little confused on the plot and who was a “good guy” and who was a “bad guy” as this seemed to keep changing.

Ultimately, this IS very much a “guy movie”. I think I like guy movies more than most girls do but war movies & Westerns are still not going to be all-time favorites of mine for the most part. The Bridge On The River Kwai might be – It was absolutely brilliant and I also enjoyed every second of it. Once Upon A Time In The West is also absolutely brilliant and its status as a classic is well deserved but, overall, I didn’t enjoy it as much as Kwai. But, yeah – it’s COOL. I can see why dudes like Sergio Leone films. It’s epic. It’s like Gone With The Wind for men! (But I actually prefer Once Upon A Time In The West).