Based on Valérian and Laureline
by Pierre Christin & Jean-Claude Mézières

Plot Synopsis: (via IMDB)
A dark force threatens Alpha, a vast metropolis and home to species from a thousand planets. Special operatives Valerian and Laureline must race to identify the marauding menace and safeguard not just Alpha, but the future of the universe. 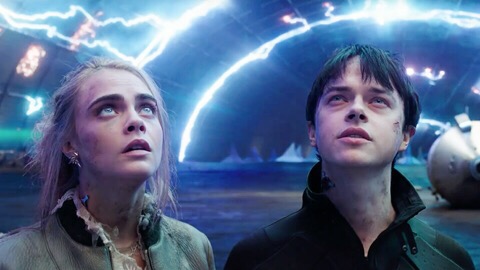 Believe me, this movie is far from perfect. But if you like Besson’s The Fifth Element, I can’t see why you wouldn’t get some enjoyment out of this one as well. It’s visually impressive and I especially liked the gorgeous planet & alien race at the beginning of the film. I’m not sure if it’s really accurate to compare it to Avatar but I couldn’t help comparing them in my mind & I personally enjoyed this “science fiction movie with funny-looking aliens that some people won’t take seriously” film more than that one. The story itself & the look of the whole thing & even the comic relief all worked just fine for me. As I said, it’s a fun film & it kept me entertained throughout its rather long running time. I actually didn’t think it felt overlong, whereas I did feel that way about the film I watched before this one, Spider-Man: Homecoming. 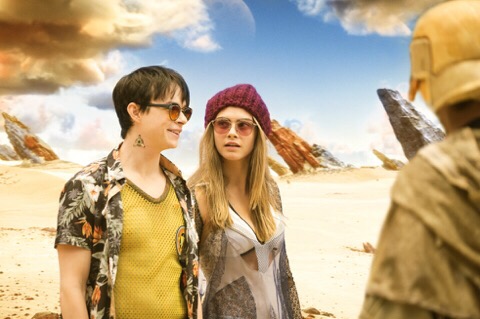 The only thing I can really fault about this film is its casting. Specifically its main stars: Dane DeHaan & Cara Delevingne as Valérian and Laureline. It’s a shame, as I think the lack of true leading character star power hurts the film. I know nothing whatsoever about the source material but they seem like two pretty cool characters and I imagine that they don’t really do them justice in this film. The surprising thing is I think DeHaan was almost weaker than Delevingne (who I really don’t like), although I’ve thought he was pretty good in the past in things such as The Place Beyond The Pines. Even more surprising is that Rihanna was pretty good in a small role but also as one of the better characters in the film overall. I liked her dance routine, which was pretty unique (but a little saucy if you bring your kids to the movie). Well, it’s no more saucy than her videos. But I may be the only one in my cinema who kept picturing the girl from Home every time she talked (my kid really likes that movie so I’ve seen it several times).

So. Where were we? A fun movie with weak stars that let the film down a little but lovely to look at and filled with wacky characters & some comic relief that you’ll either love or hate. The film is definitely not going to be for everyone but, hey – if you’ve seen The Fifth Element, you should know what to expect. If you like this genre (it’s my favorite) and if you’re happy to just enjoy a movie without overthinking things & being too judge-y, you may like this one just fine.

Today’s IMDB Top 250 Guest Review comes from Damien of Flashback/Backslide. Thanks for the review, Damien! 🙂 Now let’s see what he has to say about Sin City, IMDB rank 136 out of 250…

Frank Miller and Robert Rodriguez’s creation is the ultimate marriage of comics and film. Dozens of comic book adaptations hit screens before Sin City and with Hollywood’s habit of churning out superhero films (except for a Deadpool movie) it certainly won’t be the last. But it’s hard to think of another film that embodies the visual style of comics so well. Rodriguez applies his characteristic innovative film-making to capture the imagery and motifs of Miller’s series in a way few other directors could. Even other adaptations of Miller’s works including Zack Snyder’s 300 (2005) and Watchmen (2009), both great in their own right, don’t absorb the visual tendencies like Rodriguez’s tour de force. Like Miller’s other adaptations, Sin City received mixed reviews on initial release, polarizing critics with its hyperviolence and extreme stylization.

When judging the film it is impossible to separate the striking visuals and its unconventional storytelling. The majority of the film is presented in black-and-white but unlike Hitchcock who used lack of color to reduce the violence and gore in Psycho (1960), Rodriguez uses the technique to heighten the violence and draw attention to the gore. Our eyes are drawn to bright red streaks of blood flicking off a grayscale knife or the hot white blood pouring out of Benicio del Toro’s freshly shurikened wrist. Even though the film is in black-and-white, Rodriguez manages to create sequences that feel saturated with color using extreme contrast paired with busy frames filled with multiple shadows and bright foci like Kevin’s (Elijah Wood) glasses, or the bandages littering Marv’s (Mickey Rourke) face and arms. Many scenes go full comic using bright white silhouettes on black backgrounds.

Rodriguez pairs this visual style with near-constant voice-overs providing slick narration from multiple characters. Here Rodriguez combines Miller’s style with his own penchant for paying homage to films past. In the same way that Rodriguez and Quentin Tarantino’s Grindouse (2007) celebrates B-movies and Rodriguez’s The Faculty (1998) does the same with sci-fi horror (albeit to a lesser extent), Sin City celebrates film noir and old crime films. Well-versed on the genre’s mannerisms, Rodriguez uses them to full effect to breathe life into Miller’s creation. In an earlier post on flashbackbackslide.com we walked through a list of commonly used techniques in noir’s bag of tricks. And Sin City applies them by the fistful. Femme fatales and Sam Spade-type tough guys enter and exit the film continuously, none of them taking a majority of the spotlight. With this arrangement an extensive list of chain-smoking Hollywood A and B-listers sneak onscreen. Mickey Rourke’s scenes as Marv in particular feel like a scene cut out of a Golden Age noir. With a keen eye for quality trench coats and a near indestructibility, Marv alone could fill a board of film noir bingo with his voice-overs:

“She fires up two cigarettes and hands me one and I taste her lipstick on it and suddenly my heart’s pounding so loud I can’t hear anything else.”
-Marv (Mickey Rourke)

The cinematography and shot selections are covered with noir fingerprints. An early scene with Clive Owen, Benicio Del Toro and Brittany Murphy plays out a familiar scenario with Owen out-tough-guying Murphy’s abusive boyfriend Del Toro. Venetian blinds, mirrors, Dutch angles and silhouettes, all tools in the noir kit, are used in this one brief scene, as outlined in the two stills below:

With Sin City, Miller and Rodriguez have created a space to flex all of their combined creative muscles. After an initial phase of critical uncertainty, time has served the film well and it is now considered an artistic benchmark and one of the best neo-noirs of the last ten years along with Memento (2000), Brick (2005) and Drive (2011). The visual style the film wraps itself in has influenced other films in the genre including 300 (2006), The Spirit (2008), 300: Rise of an Empire (2014) and in some ways Snyder’s Watchmen. We will remember Sin City for this style but the hyperstylization is also what makes the film less enjoyable when judged alone. At times the images are headache-inducing with awkward dull red hues playing on bright white lines. This may also be a stylistic choice but two hours in the world of Sin City’s style can become exhausting.

And the stylistic choices seem to have taken precedence over a coherent and interesting plot as the continuous jolt of storylines tends to be frustrating as we are dropped into sequences with no knowledge of our context or the characters’ relationships. It appears that the trailer recognizes these inconsistencies and tries to sell a single unified plot that really does not exist in the movie. The film’s nonsequential timeline is reminiscent of Pulp Fiction (1994) but far less comprehensible and not nearly as enjoyable. Pulp Fiction presents its story in a deliberate order, controlling the action and tension to maximize the film’s effect. Sin City gives the impression of randomness without cause. During the Pulp Fiction scene when John Travolta and Samuel L. Jackson sit down for breakfast after being hosed down by Harvey Keitel we know that Tim Roth and Amanda Plummer are in the diner and the tension builds as we wait for the chaos to begin. But in Sin City, we see Elijah Wood in a scene even though we already witnessed his death. The problem is that knowing about the previous scene does not add any tension to the later scene like it does in Pulp Fiction.

Part of the plot problems stem from the film’s base in an expanded comic universe which does not serve the story well at times as it cannot hope to contain all the stories of the graphic novels. But the film never sets out to be judged on story alone and puts all its money on style. And the bet pays off in the long run as it is still relevant today especially with its highly anticipated sequel Sin City: A Dame to Kill For coming out soon. It will be interesting to see how the sequel treats its storyline and uses updated visual effects technology but there’s little reason to believe the newest Sin City will be drastically different from the original and will awe us with its visuals while leaving narrative content to be desired.

Rating: 7/10. The sequences with Marv at the beginning of the movie earn a 9/10. After that I found the stories less interesting and the visuals no longer as exciting.

Where to see it: On the best HD TV you can find.