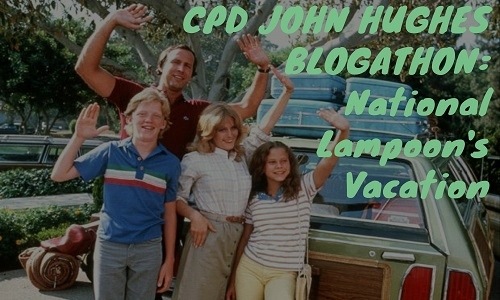 This review for the John Hughes Blogathon comes from Zoe of The Sporadic Chronicles Of A Beginner Blogger. Thanks for the reviews, Zoe! Zoe famously hated Ferris Bueller’s Day Off – Let’s see what she thought of National Lampoon’s Vacation. 🙂

“Why aren’t we flying? Because getting there is half the fun. You know that.”
– Clark Griswold

The Griswold family is destined to take a trip, but before it begins it even appears doomed. For one, their new car never arrived, and they had to settle for a Wagon Queen Family Truckster. Instead of the new sleek sportier station wagon, they get a hunk of junk. Ellen (Beverly D’Angelo) is angry with her husband Clark (Chevy Chase) for having settled for the car as well as the fact that he insists they do not fly from Chicago to Los Angeles to the amusement park Walley World. He says it will be great bonding time. Their kids, Rusty (Anthony Michael Hall) and Audrey (Dana Barron), are not thrilled with the prospect of driving cross country with the family.

“Ed, I’m not your average everyday fool. Now I want my blue sports wagon and if you can’t get it I’m gonna take my business elsewhere! Where’s my old car?”
– Clark Griswold

However, it seems as though from the get go that things are just not going to work out for the family on their trip. They are plagued with numerous mishaps and problems pop up. Robbed, vandalised and falling asleep behind the wheel results in the family becoming a little demotivated. Clark is especially starting to feel the need for a good vacation but having Murphy perch on your shoulder. On the road, though, he sees a hot young blonde (Christie Brinkley) who seems to be interested and flirts back, at any rate. Clark flirts with her too, seemingly uncaring about his wife riding alongside him. The trip does not improve when they stop ever in Kansas to visit with Ellen’s cousin Catherine (Miriam Flynn) and her insane brood and mostly useless husband Eddie (Randy Quaid). It seems that Eddie is out of work, Catherine is pregnant again, and pretty soon they force the Griswolds to take Aunt Edna (Imogene Coca) with them to drop at her son’s home in Phoenix. As though this was not bad though, her vicious dog Dinky tags along too.

The trip is truly not improving with the addition of Aunt Edna. If anything, she seems to be aggravating things quite severely. Clark sees the hot Ferrari driver again and hits on her some more and the family’s camping fails dreadfully. Clark eventually ends up killing the ever-violent Dinky when he forgets to put the dog in the car and lets it stay tied to the bumper. Mishap after mishap seems destined to plague the family, and Clark is getting edgier and edgier. He just wants his family time and a lovely vacation, something they all need, and is rapidly getting to the place that he will go to any lengths to get there. Aunt Edna proves to be a handful, and soon a wrong turn leads to the car taking quite the leap of faith and gets excessively damaged. Clark gets hustled for all his money and the trip is really hitting a serious low. It seems that the worst has already come, but more often and not he is proven wrong. 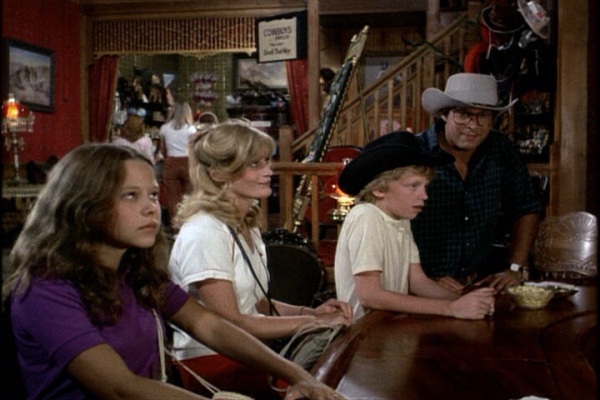 “Hey Knucklehead, set us up with four Red Eyes will ya?”
– Clark Griswold

Will the Griswolds ever get to Walley World? What will Clark do about the hot Ferrari blonde? How are the kids dealing with the awful vacation that they have been subjected to? How much more of Clark’s lunacy can Ellen deal with before she is sick and tired of him? What is the family to do seeing as they are so low on cash and in a dilapidated and dying car? 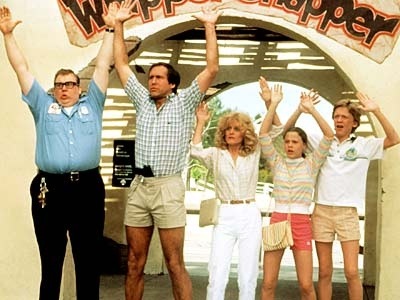 “Oh spare me, Clark, I know your brand of family fun. Tomorrow you’ll probably kill the desk clerk, hold up a McDonald’s, and drive us 1000 miles out of the way to see the world’s largest pile of mud!”
– Ellen Griswold

I will score this a 7/10. There were good things and there were bad things and there were plenty of 80s based things, but overall I didn’t hate this, but will certainly not be rushing to see it again. If Clark was my husband, I would have kicked his ass ages ago for his ridiculous behaviour with the blonde Ferrari girl. Then, point two, stopping by at the family in Kansas was a disastrous idea, that family was just all broken and gross and wrong (yes, me judging). Aunt Edna was a real pain, and had some slight (though at times forced) humour to add to the entire ordeal. There were plenty things that happened along the lines of the vacation that would have had me throw in the towel, and really, they should have just flown. He got hustled in dodgy downtown areas and tagged and all, though he could definitely open a school to teach you how to drive in your sleep! I must say that this movie has not aged the best of all time but it was not so bad that you were put off of watching it, though I must confess it felt longer than it was. This was my first viewing of it and it was pretty decent, truly. There were bits that were quite funny, though I have to say Clark was such a chop. He did, however, carry much of the movie for me. Seeing a young Eugene Levy was also entertaining for me, no matter how short his appearance was. Have I redeemed myself in your eyes somewhat, T9M? 😛