In World War II, British prisoners are marched to a Japanese prison camp in western Burma. The commandant, Colonel Saito (Sessue Hayakawa), informs them that all prisoners, regardless of rank, are to work on the construction of a railroad bridge over the River Kwai. The senior British officer, Lt. Colonel Nicholson (Alec Guinness), reminds Saito that the Geneva Conventions exempt officers from manual labor.

And a bit more – that gives you the general idea. 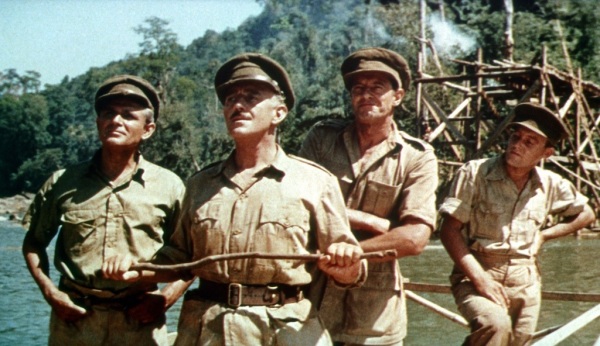 I have to admit that with this IMDB Top 250 Challenge, I’m not looking forward to forcing myself to watch some of them – Especially the war movies and the Westerns. Plus most of them are so LONG. So I put the 161 minute war movie The Bridge On The River Kwai on when I had nothing else to watch and figured I could have it on in the background while I did some chores and it would get one of these long, boring war movies off the list. Well, I didn’t do any of those chores because this movie is BRILLIANT! I loved it! Along with the Charlie Chaplin stuff, Kwai is my biggest pleasant surprise since starting this challenge. My faith in the IMDB Top 250 has somewhat been restored after some real disappointments recently.

Here’s my confession: I’d seen Alec Guinness in nothing other than Star Wars before this. Horrible movie fan, I know! Well, you know… I’m young(ish). So, anyway… Give me a break. 😉

Alec Guinness is amazing in this. Turns out he’s a REALLY great actor. Lol! Yeah – I think everyone already knew this so there’s not much point in saying much more about it. His performance as the strong-willed Lt. Colonel Nicholson, whose resolve never falters, truly is stunning. The film is worth the watch for his performance alone. Luckily, though, it’s worth watching for many other reasons as well.

William Holden plays United States Navy Commander Shears and also gives a fine (and very American) performance. I won’t go into the story as there may actually be some people who haven’t seen this but he plays a very important role. Hell – everyone in this gives an Oscar-worthy performance and I can’t fault any of them: Sessue Hayakawa as Colonel Saito, Jack Hawkins as tough-guy British Major Warden, Geoffrey Horne as the cute Canadian Lieutenant Joyce, and James Donald as British medical officer Major Clipton, who has a smaller role but I really enjoyed his character & he gets to deliver a great memorable line. Why can’t they make movies like this with performances like these anymore?

One of those “worthy” classics that truly deserves all the praise it has received. Excellent, gripping story with an intense and unforgettable ending and characters that you really believe in and care about (something unfortunately lacking in far too many modern movies). Unlike some classics that have been hyped up over the years and then leave you a bit disappointed when you watch them, The Bridge On The River Kwai never disappoints & is one you’ll be happy to have finally forced yourself to watch. Oh, and it’s good from the very start, unlike some long classics that take a while to get going. I guarantee you won’t get any chores done for 161 minutes should you decide to give this one a try. And I really hope you do give it a try. As you may have guessed, I highly recommend it.

The famous “Breakfast Club” whistle. John Hughes knew good shit when he saw it. (I wasn’t going to finish this review without mentioning The Breakfast Club): 😉

(And after this one, I watched a long Western! Once Upon A Time In The West. I suck at being girly.)

Based on Still Life 1936 play by Noël Coward

Plot Synopsis: (via Wikipedia)
Brief Encounter is about British suburban life on the eve of World War 2, centering on Laura, a married woman with children, whose conventional life becomes increasingly complicated because of a chance meeting at a railway station with a married stranger, Alec. They fall in love, bringing about unexpected consequences.

Figured I should watch a romantic movie for Valentine’s Day. As I’m finding current movies less & less romantic (unless they’re Pixar!), I’ve decided to explore older movies a bit more. So I went with Brief Encounter, a story about a married man & a married woman who meet & fall in love & have to decide how they’re going to deal with that since they’re married and have kids & all that malarkey. Okay – I have to be careful how I review this as the hubby likes to have a little peek at my blog sometimes… 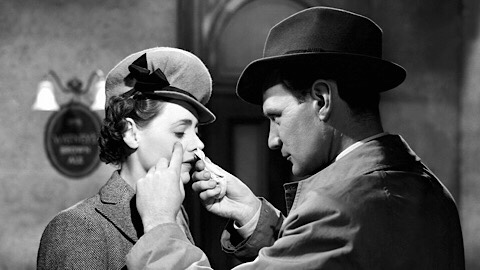 I really liked this movie. Two things I actually really liked were that a) they were middle-aged and b) they were quite plain looking. Nowadays everyone has to be young & beautiful, especially in romantic love stories. It made them seem very real and I was able to believe the love story more because of it. And, yeah – just because you’re middle-aged and have kids doesn’t mean that you lose all interest in romance & aren’t capable of having a passionate love affair.

Holy crap, though – talk about repressed British people. My god how things have changed in the UK since 1945. The poor woman in this constantly looked like she was painfully constipated because she couldn’t handle the stress of being in love with someone other than her husband. She even kept getting all faint. Nowadays in the UK they’d have a quickie in the bathroom on the train and that would be that. But I certainly don’t want to see that movie. I know plenty of people would rather see that more modern version of Brief Encounter but I’ll take it as it is, with all that great sexual tension & frustration. I think I’d much rather live in that time when people were “proper” and polite. But then I remind myself that I’d have to be a good housewife then and actually learn how to cook & sew & all that bullshit. So, maybe I’ll stick to living in 2013 (with some good old-fashioned black & white movie romance thrown in here & there).