Based on Disney’s Dumbo by Otto Englander, Joe Grant & Dick Huemer and on Dumbo by Helen Aberson & Harold Pearl

Plot Synopsis: (via IMDb)
A young elephant, whose oversized ears enable him to fly, helps save a struggling circus, but when the circus plans a new venture, Dumbo and his friends discover dark secrets beneath its shiny veneer. 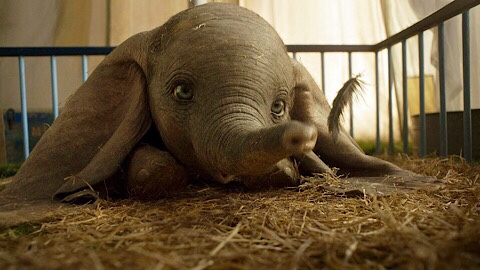 First of all, I’m really sick of these Disney live-action remakes of animated classics. I don’t see the point. From recent trailers, The Lion King looks like a soulless copy and Aladdin looks absolutely dreadful. Beauty And The Beast pretty much sucked (but I can’t stand Emma Watson so that didn’t help). I didn’t mind Cinderella but I wonder if it would just annoy me if I watched it again now that I’m sick of all these live-action remakes. I’ve kind of vowed to no longer waste my money going to see this shit.

But I knew I’d go to Dumbo because it’s Tim Burton. I’m a hypocrite. I know his best films are far in the past but I still haven’t given up on him and I wanted to see what he’d do with this film. Plus Dumbo himself was so adorable in the trailers. I’ve always loved that baby elephant! Well, I enjoyed this film. It’s a good one to end on. I’ll happily watch no more live-action remakes after this one. 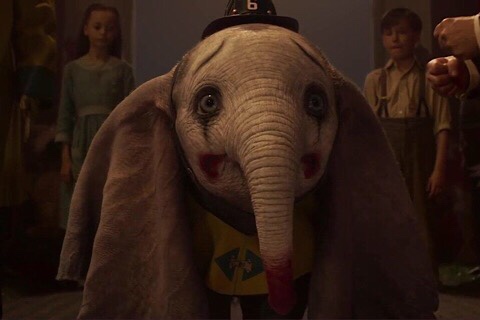 I feel like I have to justify liking a live-action remake. What can I say? I still love that baby elephant. Of course this comes nowhere near the original film and it breaks my heart that some kids may be watching these remakes before the animated films. Or not watching the animated films at all. For some reason, I prefer when these remakes aren’t an exact copy (which The Lion King looks like). I don’t mind having extra bits of story added on, making it feel like an entirely separate film and therefore not messing with the original film’s legacy in my mind. This movie isn’t Dumbo to me. It never will be. But I think they did well with the character of Dumbo himself and he was by far the best thing about this film (as he should be). Dumbo is the true star of this movie. 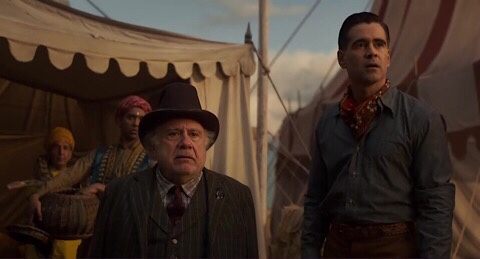 The reviews I’ve read have all said that it’s the human characters that let this film down. This is true, although they aren’t terrible. They’re bland but not hateful. The only truly weak one is Michael Keaton’s completely generic baddie but the rest are good enough to support the overall story about a flying elephant. Colin Farrell and his two children (Nico Parker & Finley Hobbins), who are the main human characters, are fine but these roles could’ve been played by anyone. However, Danny DeVito & Eva Green are fun to watch and perfect for Tim Burton’s films – you can understand why he sticks with his favorite actors in so many of his films. The human stories were good enough to keep the film interesting while not overlooking the fact that the one story that really matters is Dumbo’s. And I liked the ending. I’m fine with all the changes in the second half as it’s so different from the original that it hasn’t destroyed my love for the animated film. I also liked how they incorporated the Pink Elephants On Parade bit into this film.

Is it weird that I feel bad for liking the new Dumbo?? I do seriously wish they’d stop with these live-action remakes but, in this case, I was happy seeing this character in a new way. He’s always been a favorite Disney character of mine and I think they did a good job with the look him. They got a good balance between making him look like a real elephant but also sort of “cartoony”, and his adorable blue eyes are very expressive. They did a better job with him than with the other CGI animals in these Disney remakes. I also enjoyed the overall production design of this film, but that’s usually the case with Burton’s movies. None of these Disney remakes will ever top the animated classics but at least the 2019 Dumbo hasn’t destroyed the original film’s legacy for me.

I’ve added Dumbo to my full ranked list of all the Tim Burton movies I’ve seen HERE. I guess I better finally watch Dark Shadows as it’s the only full-length film he’s directed that I’ve not seen.