Plot Synopsis: (via Wikipedia)
A surfer gets stranded 200 yards from shore, and must use her wits and determination to survive a great white shark attack.

What can I say about a shark movie? You either like them or you don’t. We’re obviously never going to get another classic like Jaws but The Shallows is a decent enough shark attack thriller for those who go for this very specific genre.

Blake Lively is fine. I’ll be honest – her character got on my nerves at first. She’s just so “pretty, bubbly, skinny blonde in a tiny bikini” and you can’t help but feel that she’s extremely irresponsible for going to a secret beach all alone. If this wasn’t a shark attack movie, you’d assume that the two guys she meets there in the middle of nowhere would kill her. A friend was going to go with her but cancels at the last minute, surprise surprise, but how was her friend going to find the “secret beach” anyway since Lively is already on her way there? Hmm??? So it’s your usual silly Hollywood movie setup, complete with sad backstory that’s meant to give our main character a reason to “fight to survive!”. There’s also some annoying texting back & forth at the beginning, which flashes up on the movie screen. I hate when they do that in movies. Amazing phone reception at this secret beach, though! 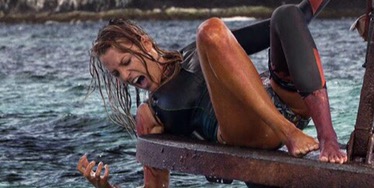 I’m sounding too picky now. I realize this kind of movie always gives a similar sort of story to the main character. If we don’t get a little bit of a backstory, why would we care if they survive? So after a bit of a silly start & some details thrown at us that we KNOW will come in handy later, we get to the action & the movie does get a lot better. Does Lively’s character do the smartest things at all times? Well, aside from stupidly going to this beach completely alone in the first place, I think she does her best with the situation. There wasn’t anything that annoyed me too much, at least, like when people in horror movies make one stupid decision after another. As my hubby kept pointing out to me “You’d be dead by now in this situation“, I can’t really complain about anything she does since I’d do everything wrong & die within five minutes. Thanks hubby – you know I’m of no use in extreme situations! I admit it. 😉

I know I’ve sounded a little negative but I did enjoy The Shallows. I don’t think anyone really goes to a shark attack movie wanting to see something Oscar worthy, do they?? The action was decently paced, the special effects were good enough, and the story was all it really needed to be. I only sound “meh” because the movie ended up being exactly what I expected. I have to say I had a lot more fun watching this than I have watching quite a few other films so far this year. 2016 is turning out to be a shockingly bad year for movies! So I may be giving this a slightly higher rating than it deserves but, if you’re into this kind of movie, I can pretty much guarantee you’ll like this one just fine. And if you like butts, you’ll love it as you get to see A LOT of Lively’s butt while she’s paddling her surfboard. I think I saw more butt than shark. “Shark butt, ooh ha ha!” (Sorry – that was a poor Finding Nemo joke. The hubby & I kept making Nemo jokes while watching this…)