Based on Border by John Ajvide Lindqvist

Plot Synopsis: (via IMDb)
A customs officer who can smell fear develops an unusual attraction to a strange traveler while aiding a police investigation which will call into question her entire existence.

Er. Um. What the fuck did I just watch?! Well. Huh. This was an interesting film…

First of all, this was personally recommended to me by an old high school acquaintance so I thought “What the hell, I’ll check it out” when a local cinema actually showed this one last week. THIS is why I don’t listen to “real life” people. I only trust my fellow movie blog nerds! To be fair, she was right in that this movie is kind of right up my alley. I love foreign films and I appreciate weird. I watch so many films that I get bored with the same old predictable storylines. I want to see a film I’ll remember. Something like Mandy! And, yeah – I suppose Border too. I’ll certainly always remember it, at least. Not gonna lie, though – it’ll mostly be the sex scene that I remember. 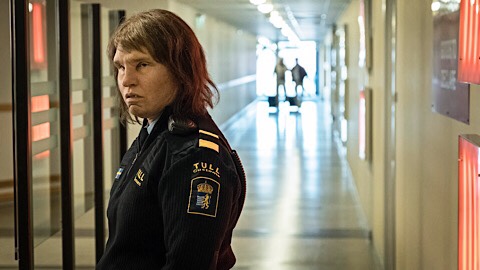 Eva Melander plays the customs officer who can smell fear and she was very good in this film. You could feel her loneliness and how she feels like an outsider. Her performance is the best thing about the movie overall and, without that performance and character, I don’t think this would have as high of a rating as it does (7.1 on IMDb). I do think people rate foreign films a bit too highly sometimes – not all foreign films are good. I did like the creepy animal attraction she had with the mysterious stranger and did enjoy the overall story. For once I can say that I truly had no idea what the hell was going on in a movie.

I’ll keep this short as I think this is one of those films where you’re better off not knowing too much about it beforehand. If you like weird and you like the unexpected and you like bizarre graphic sex and you like foreign films and you like indie films and you like Frozen, you might like this truly strange Swedish film. There’s even a mention of Ikea at one point. YES! I’d have been disappointed if they hadn’t mentioned Ikea. And, yes – I meant the Anna & Elsa Frozen when I said Frozen. This has small Frozen vibes but is most definitely NOT child-friendly. There’s also mention of disturbing things involving children (though thankfully not shown), so be aware of that beforehand. And if you do watch this based on my half-assed review and end up scarred for life, I take no responsibility. Watch at your own risk! You might love it or you might hate it but I promise that you won’t forget it. I’d like to give it a higher rating based mostly on Melander’s performance but don’t think the film itself is as good as it could’ve been.