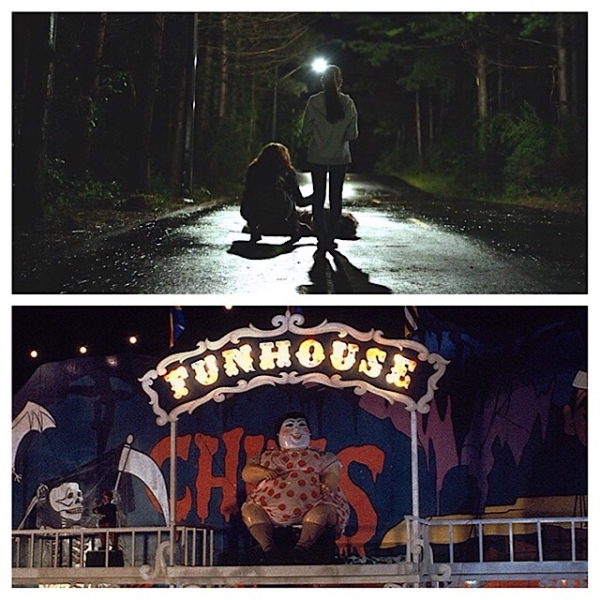 The Funhouse (1981) (also released as Carnival of Terror)

Plot Synopsis: (via Wikipedia)
The film’s plot concerns four teenagers who become trapped in a dark ride at a local carnival and are stalked by a deformed killer inside. 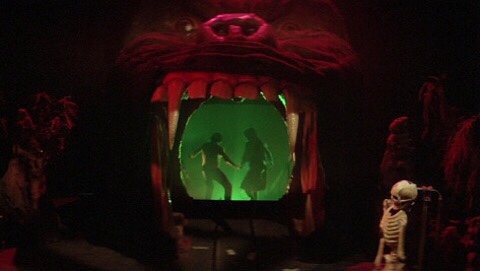 Not only do I love 70’s horror… I also love cheesy 80’s horror! So this Tobe Hooper movie seemed right up my alley. PLUS it’s set in a carnival and I always love this sort of setting. And a Funhouse! What’s better than a creepy-ass Funhouse?! Well… damn. This movie isn’t exactly the worst 80’s horror I’ve seen since I’ve seen MANY bad ones – It’s just very forgettable. Maybe I hyped it up too much in my mind. Meh. Watch it only if you’re sad like me and feel the urge to watch every movie ever made in my favorite sort of genres…

Plot Synopsis: (via Wikipedia)
Its plot follows a troubled mother and her adolescent daughter who find themselves stranded at night on a country road with a malicious creature hunting them.

This was fine for a (I’m assuming) low-budget indie “horror”. It’s more of a psychological horror, although you do see the monster (even though it’s symbolic of the mother and her strained relationship with her daughter). If you want a straight-up horror, this one probably won’t be your kind of thing. If you want an indie drama about a mother & daughter with some decent acting (for a “horror” movie), you might like this one. But I gotta admit it’s a little boring & the mother (played by Zoe Kazan) is a little too hateful.

Today’s IMDB Top 250 Guest Review comes from John of 501 Must See Movies Project . Thanks for taking part in this, John! 🙂 Now let’s hear his thoughts on Amadeus, IMDB rank 88 out of 250…

Best Writing, Screenplay Based on Material from Another Medium: Peter Shaffer

After attempting suicide and being placed in an insane asylum, an elderly Antonio Salieri (Abraham) gives his confession to Father Vogler (Richard Frank), a young priest.  In it he tells of his relationship with God, starting as a young boy devoting himself to music that glorifies God in exchange for his own fame and immortality as a composer.  As time goes on, he gains notoriety and respect within the music world, rising to the role of court composer for Holy Roman Emperor Joseph II (Jones) in Vienna.  His life drastically changes when a young, arrogant, vile Wolfgang Amadeus Mozart (Hulce) performs in Vienna and is subsequently fired by his patron Count Hieronymus von Colloredo (Nicholas Kepros) and stays in Vienna.

Mozart stays in Vienna, marries Constanze (Berridge) and establishes himself as a brilliant composer.  Salieri, upon reading some of Mozart’s music, realizes that Mozart’s music, and not his, is the voice of God.  He prays, “From now on we are enemies, You and I. Because You choose for Your instrument a boastful, lustful, smutty, infantile boy and give me for reward only the ability to recognize the incarnation. Because You are unjust, unfair, unkind, I will block You, I swear it. I will hinder and harm Your creature on earth as far as I am able.”  Despite his envy of Mozart and hatred of God, Salieri can’t help but recognize Mozart’s genius.

Though ignoring historical accuracy, Amadeus tells the entertaining story of Mozart’s later life through the perspective of a fellow composer who was seriously threatened by him.  It is highly unlikely that Antonio Salieri poisoned Mozart or caused his death.  In what little research I’ve done on the relationship between Salieri and Mozart, it seems that their dislike for one another was more on the level of two people competing for the same job.  It was written that Salieri was one of the few people to attend Mozart’s interment.

It’s interesting to me how a period film about one of the most famous classical composers had such critical success in the MTV-driven culture of the 1980s.  It speaks volumes to the attention to detail in every facet of movie making that the cast and crew gave in Amadeus.  I’m no expert on classical music, however, I do appreciate the amount of work and talent needed to make the music.  This film does a great job in celebrating Mozart while telling an entertaining story.  The music, costuming, acting, and cinematography all come together nicely.

F. Murray Abraham and Tom Hulce are perfect in each of their roles.  They embody the characteristics of their characters in a way that works to perfection.

Hulce’s Mozart is more or less an 18th century rock star, knowing he’s a genius and flaunting it for all to see.  The audience can’t help but be annoyed and awed at the same time by this bratty child-like adult who writes flawless music.  As Salieri puts it, “Displace one note and there would be diminishment. Displace one phrase and the structure would fall.”  His struggle for acceptance and constantly butting heads with Viennese laws and ultimately pushing through because he knows his work is perfect speak to the transformational person Mozart was with music.

But then there’s that laugh.  That annoying, irritation, gouge-your-ears-out laugh.  It’s actually not that bad after the first few times, but still.

It was interesting to see how different Mozart was following his father’s death.  The build up with it was somewhat predictable: Mozart’s father didn’t approve of his sons actions, and despite his immaturity Mozart still wanted his father’s approval.  He sought for that approval after his father died, and ultimately it contributed to his deteriorating health and well-being, with a little help from Salieri of course.

Having primarily worked in theater and television, F. Murray Abraham was not very familiar with movie audiences.  His most significant role prior to Amadeus was Omar Suarez in Scarface the year before.  It’s difficult going from a relatively unknown to winning an Academy Award.  Where does one go professionally after a performance like Murray’s Salieri?  He’s had a number of noteworthy roles over the years, but the success Murray had with Amadeus limited him thereafter.

Salieri has to deal with fate, and that though he had the desire to make great music, he was not given the ability to create that music, and Mozart was given that talent instead.  Murray is simply brilliant in portraying this inward struggle.  His facial expressions as he read Mozart’s sheet music or secretly attending Mozart’s performances out of awe of his work build that struggle he deals with and the growing envy he has of Mozart and God.

It’s an interesting dynamic for Salieri as he describes to the priest how Mozart’s music remained popular, yet his own work has slowly deteriorated from common knowledge.  It seems a fitting punishment for his crime to watch his work fade into obscurity.

Though told through the perspective of one of Mozart’s rivals, Amadeus does a great job in celebrating Mozart’s music and life.  It’s a movie I can re-visit every 5 to 7 years and still thoroughly enjoy.  I’d recommend Amadeus for those who enjoy classical music, though I imagine most who do have seen it.