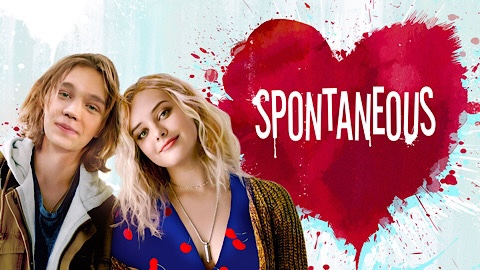 Based on Spontaneous by Aaron Starmer

Plot Synopsis: (via IMDb):
Get ready for the outrageous coming-of-age love story about growing up…and blowing up. When students in their school begin exploding (literally), seniors Mara and Dylan struggle to survive in a world where each moment may be their last. 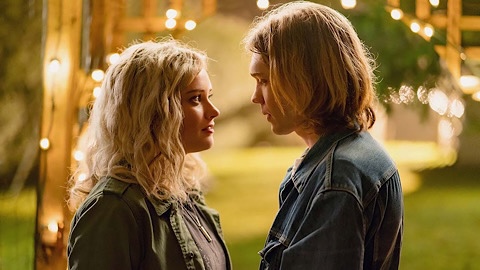 I really wasn’t expecting to like this movie so much. First of all, I assume this is a YA book? Though I’m not sure as I’ve not read it & know nothing whatsoever about it. I hate to use that Young Adult label as it gets a negative response these days and I thought this was a really good film. This movie gave me a Heathers vibe (come to think of it, I suppose Heathers would be what’s considered YA these days too). And Heathers rules but I really thought that sort of dark humor wouldn’t be allowed anymore. As a big fan of dark humor & a full-on “I trust no one” & “Just leave me the f*^k alone” Gen-Xer, this movie spoke to my teenage self & I’m curious what current teens think of it. If they can find a way to watch it… (It’s rated R in America & 15 in the U.K.). It’s very dark so is certainly only for the late teens into twenties sort of age. It’s extremely bloody, too (though not what I’d call “gory”). Hard to avoid it being bloody since it’s about a class of high school seniors who suddenly start randomly blowing up. 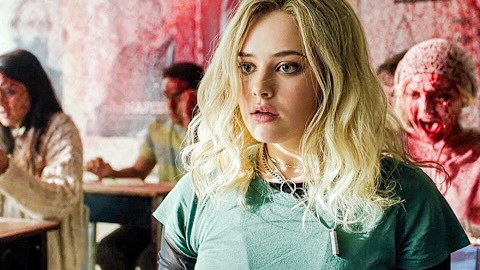 The main girl is Mara, played by Katherine Langford. She’s fantastic & cool as shit. Yeah, she’s kind of the Winona Ryder Veronica in Heathers. I think that if you go for her character, you’ll like this movie. She’s very funny with a very morbid sense of humor. But she’s also not necessarily a very nice or likeable person. I could really relate to her character as she very much has the attitude that I had in my late teens. She manages to be cool and say the perfect bitchy things that I think lot of us wish we could’ve said in high school if we weren’t all so scared of what people would think of us. So she’s kind of that ideal “cool teen” most of us were too scared to be. 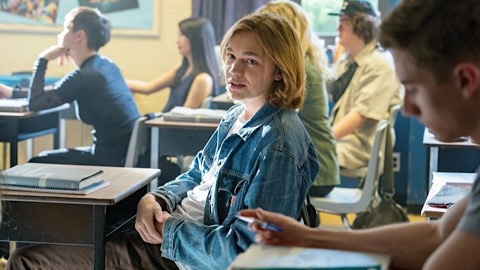 After the first exploding teen, a boy named Dylan (played by Charlie Plummer) gets up the nerve to let Mara know that he has a crush on her. He’s most definitely not Christian Slater’s J.D. from Heathers: Dylan is sweet & nerdy and instantly lovable. He also has a quirky sense of humor that goes really well with Mara’s and they end up being one of those movie couples who just work perfectly together. Oh, and he’s a movie nerd & the two of them quote cool movies so obviously that made me like them & root for them even more. These two are really great in this. I know Langford has been in a few things I’ve seen but I’d not really noticed her before & Plummer was in a movie I hated and I didn’t notice him at all. In this, however, they’re fantastic. I’d be a fan of them both right now if I was a teen. Also liked Mara’s best friend, played by Hayley Law. They had a cool friendship (the sort I always wanted in school but girls never liked me).

Besides all the exploding teens & great dark humor, this movie does have a serious sort of undercurrent running through it. I very much disagree with the fairly low rating on IMDb. I’ve only had a brief glance at what people are saying but can’t exactly figure out what the haters don’t like about this movie. Maybe they wanted a straightforward horror comedy? That’s not quite what this is (although it is funny and also horrific). The simple thing would be to say that this movie is a coming of age film and an allegory for their fear and uncertainty at finishing high school and becoming adults. I think it’s way more than that, though. I feel very sorry for teens these days as they’re living in extremely difficult times. I can’t imagine the constant fear of possibly being shot every damn time they go to school (talking about American teens in this case, which is where the movie is based). What kind of life is that? And now they’ve had to deal with Covid too. And I won’t even go into all the other shit as I try to avoid anything political but, man, the the last four years have been a total clusterfuck. Add the social media nightmare into the mix, something Gen X didn’t have to worry about at all, and I honestly don’t know how current teenagers are able to get out of bed each day. I can barely handle any of this shit as an adult (but I’ve never been good at being one of those).

So, yeah – I imagine that being a modern teen must feel like living with the fear that you could spontaneously combust at any moment. I think the movie is telling us that without actually telling us that. Besides having one very obvious message to live each day to the fullest as you never know what might happen, it doesn’t have any other specific messages it’s trying to force on us. The movie is thankfully not at all preachy (which I hate). It doesn’t offer any obvious answers or explanations but I like it being ambiguous as I think the film could mean different things to different people. I think anyone struggling with the many issues related to being a teen nowadays would be able to identify with these characters and their feelings. 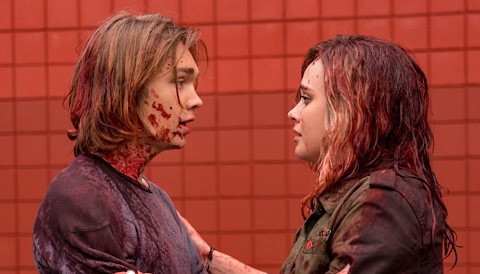 Well, I honestly kind of loved this movie. It’s darkly funny and deeply sad and I love that different people will get different meanings from it. The “live life to the fullest” message is maybe a tiny bit simplistic for such dark film but, hell, it’s the exact same message Ferris Bueller gave those of us in Generation X. It may be over 30 years since the John Hughes days but it was hard being a teenager then and it’s sure as shit hard now. I truly am sorry that society has failed to protect these kids & teenagers. 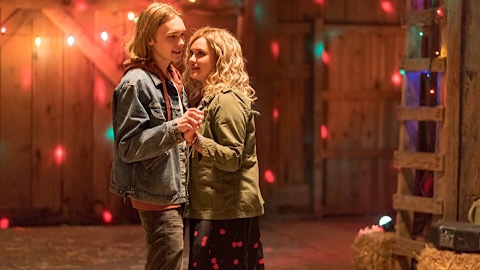 **Just a note to say that I watched waaaay too many movies in April so I’m going to be very late posting my April roundup as it’ll take forever to write. But a few of the April roundup reviews, like this one, ended up being so long that I decided to post them separately. It also helps that I really enjoyed each of these. I also fully reviewed Promising Young Woman, Swallow & Bloodsport (yes, the Jean-Claude Van Damme movie). Oh, and Sound Of Metal & My Octopus Teacher for the Oscars.