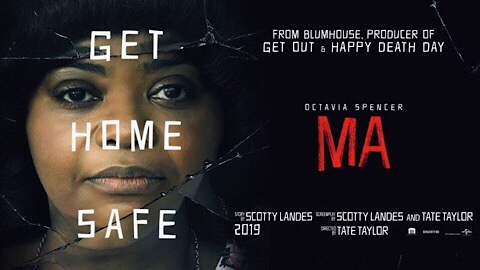 Plot Synopsis: (via Wikipedia)
Ma follows a group of teenagers who befriend a lonely middle-aged woman who allows them to party in her basement, and find themselves being terrorized by her. 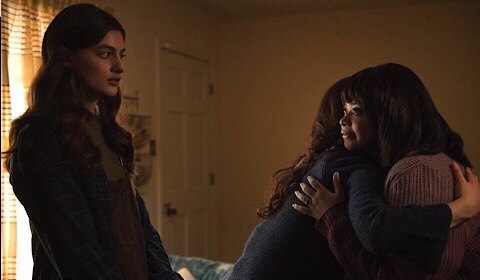 Hey! The main teen girl in this (Diana Silvers) was in Booksmart. I reviewed that yesterday and was probably very unfairly harsh on that film. It’s a better film than Ma. However, I weirdly got far more enjoyment out of Ma. So, while I recognize that Ma is an odd film that some will hate, I’m going to review it positively. I liked it. When it comes to horror, I always lower my expectations. Is it a good film? Meh. Is it a fun horror with a fairly unique idea compared to the so many predictable horror movies that get made? Yes. That’s all you can really ask for from this type of movie. It’s not trying to be Suspiria or Rosemary’s Baby or some horror classic like those.

First of all, I always moan about unlikeable characters in horror movies. How are we supposed to care what happens to them if they’re assholes? I’ve noticed that horror characters are getting better these days and, luckily, Ma does quite well with its characters (as far as the horror genre goes). The teenagers, while not the most developed characters ever, are likeable enough and certainly not at all deserving of what this woman puts them through. Octavia Spencer’s role is also very good in that she’s actually a somewhat sympathetic villain. At least at first… I’ll stay spoiler-free but you will (I should hope) sympathize with her a bit. While I love a good full-on “crazy lady” (give me Piper Laurie in Carrie!), there’s more to Spencer’s character in this so she doesn’t get to let loose and go as completely mental as I was kind of hoping to see from her. However, once you know the story, it makes more sense for her character to not turn into Kathy Bates in Misery (although, don’t worry – she still goes pretty psycho if you’re wanting to see that!).

Another element I knew nothing about but was a nice surprise is that there’s a bit of time spent on the parents of the teenagers. Not nearly as much time as I’d have liked, though. They mostly focus on the main girl’s mother (played by Juliette Lewis) but she also deserved much more development. All the parents really should’ve had more time spent on their character development to further round out this story and I think this could’ve easily been achieved by taking just a little bit of time away from the teenagers. Yes, I’m the age of the parents (oh my god, when did that happen?!?!) and I understand the annoying need to market everything to a young audience these days but, in the context of this storyline, we needed a little more time spent on the boring, old fart parents as well. What’s weird is that I seriously hated Juliette Lewis when I was a teenager but now kind of love seeing her in stuff? Maybe I just appreciate seeing people my age in movies now. I think it started with Whip It. I love that movie. She almost made me want to be a kick ass middle-aged roller derby chick. 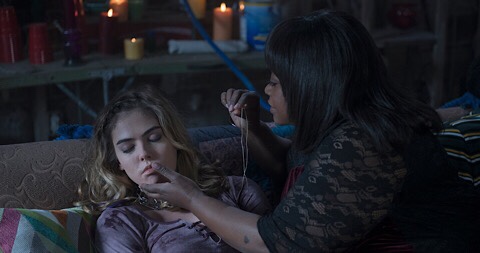 Well, I enjoyed Ma and appreciated the fact that the characters were a bit better than we normally get in this sort of horror movie. As with most horror movies, though, I thought the ending was weak. To be honest, I’m not sure how I’d have wanted it to end but it was kind of a letdown after a fairly strong start. I did also appreciate the storyline and the fact that this idea felt more original than in a lot of modern horrors. I’m not going to pretend that it’s a good film, though, and it’s one I’d only recommend to people if I knew their movie tastes well and thought they’d like it. You might hate it but I liked it enough to give it a much higher rating than I know it actually deserves. Fuck it, I rate on my level of enjoyment just as much as on a movie’s worthiness. I’ve been too harsh on movies recently anyway. 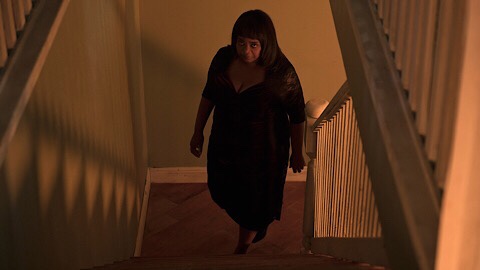