Honestly, I can’t be bothered. Lol! It’s Superman. You know the general plot. 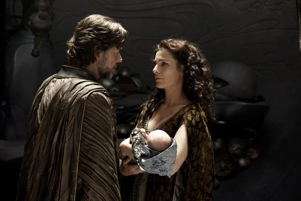 My Opinion (no spoilers):

My reviews have gotten way too wordy. This movie will have already been reviewed a lot (I’m looking forward to catching up on all your great reviews here now that I’ve seen this). So I’m going to try to keep this short & sweet by doing my “good” and “not so good” thing.

– The casting. It was excellent. So many people in this were the exact right choices for their roles. I thought the very best were actually Russell Crowe, Kevin Costner, Diane Lane and Michael Shannon. Now, Crowe and Costner are NOT actors I like all that much. But they were bloody PERFECT in these roles. And, luckily, Crowe doesn’t sing in this one. Lol. As for Superman himself, Henry Cavill, he seemed the right choice. I’ve only just seen this so still thinking about it. He certainly has the perfect look to play Superman (as I picture Superman which, to my mind because of my age, is mostly Christopher Reeve). I know nothing of the comics (give me a break – I’m a girl). :-p But his look seems just right. And Amy Adams is my favorite actress so I’ll say nothing bad about her. She’s sweet and has an adorable little nose. But she’s the one my hubby didn’t think fit the part. I dunno. I’ll let others decide on that – I just like her as an actress.

– The beginning. It was a little hard to get into at first as it’s very different from the 1978 Superman I grew up with and have an affection for even though I know it’s far from perfect. But thinking about it now, I really liked how Man Of Steel started. It was great seeing so much of his world and getting to know more of his backstory than I previously knew (I have very little Superman knowledge).

– Superman’s families. On his home world and on Earth. As I said, it was great seeing more of his home world and his mother & father. Crowe was perfect as his father. Ayelet Zurer, his mother, seemed a good choice as well from what we see of her. And as I said, Kevin Costner & Diane Lane were absolutely perfect. My favorite bits of the whole movie were probably the ones with Superman & both these families. Very good character development as far as all the parents & their relationships with Superman were concerned.

– Shirtless Superman. Very nice. Overall, he’s not my type. The face is too chiseled and I like my dark-haired guys to have chocolate brown eyes and I like them to have more of a “boy next door” look. He’s too handsome. Nice bare chest, though! And a bit of hair on his chest – not one of these hairless girly boys. Think I preferred him with the beard, too – hides that crazy “man of steel” jaw. Am I going on too much? I’ll shut up now. (Thor is hotter) 😉 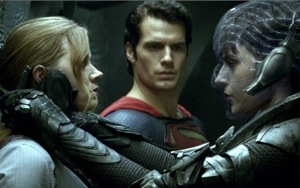 The Not So Good:

– Some of the character development. It wasn’t too bad at first but I really was expecting more than we got and am a little disappointed by that. Lois Lane was probably the most underdeveloped. Oh, and those she works with – we were suddenly meant to care about them at the end when we’d seen so little of them. And Superman himself could have done with a bit more development. They did try with him, however. But it didn’t QUITE work for me. I didn’t feel his “internal struggle superhero thang” as much as I’d have liked – I think they almost achieved this then messed it up at the end by going so overboard on the action. I’m not entirely sure if this was the fault of the actor, or the script, or what. Perhaps he wasn’t exactly right for the role? I’ve still not decided. And I didn’t fully buy into his relationship with Lois Lane. That felt a bit weak. Thank god for Superman’s parents – without the scenes with them, I think I’d have felt nothing at all for his character. He just really lacks a personality in this. However, we get a little glimpse of personality at the end that I’m really REALLY hoping we get to see more of in a sequel. Give him a personality! And more shirtless scenes.

– The flashbacks. This is a minor thing but I didn’t like them showing his childhood & teen years in flashback. I felt the movie kind of lost something doing it this way. I really would have liked to see him grow up on Earth in chronological order. I just didn’t like the “back and forth” at that point in the movie. Plus I’d have liked to see much more of his younger years to better understand his character, especially as the second half of the movie ended up so disappointing compared to the first half.

– The finale. It was too much. It was too long. It was WAY over the top. The more I think about it, the more I really did NOT like the last 45 minutes or so of this film. Or however long it was – it FELT very long indeed. Very disappointing after such a strong beginning & middle.

A promising reboot with a good beginning & middle that is, unfortunately, almost completely destroyed by a very disappointing and ridiculously over-the-top finale. Some excellent casting, particularly both sets of Superman’s parents, is what saves this film and gives it the depth and character development needed to make the audience care in the slightest about these characters & what happens to them. Without Crowe, Costner, Lane & Zurer (the parents), I have to be honest and say that this film would have been a complete and utter disaster. The final scene, however, gave me a glimmer of hope for the sequel. Overall, the movie IS “promising” in that I think there’s the promise of a brilliant sequel in Superman’s future if they do things right next time and make it far more like the first half than the second half of Man Of Steel. Unfortunately, we’re only given the hope of a great movie in the future instead of a great one this time. Disappointing.

So where does Man Of Steel rank in my recent list of My Top Ten Superhero Movies? Have a look HERE. 🙂

*preparing for the angry comments… Lol!* *Especially now that I’ve edited this & lowered the rating…*