Plot Synopsis: (via Wikipedia)
The plot follows the Parr family as they balance regaining the public’s trust of superheroes with their civilian family life, only to combat a new foe who seeks to turn the populace against all supers. 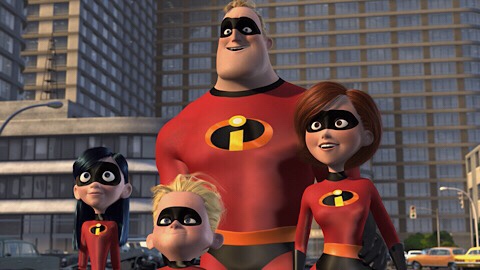 Okay, this will be super(hero) quick. I enjoyed this movie. I adore Pixar. But, like when I reviewed Ant-Man And The Wasp yesterday, I have pretty much nothing to say about it. I honestly just don’t know what to say anymore about 1. Superhero movies (especially sequels) and 2. Animated sequels such as this one. It was fun. We got to see our beloved Incredibles characters again. But it’s nothing new. If you liked the first one, you’ll like this one. It’s the same thing again but with the parents’ roles reversed.

Let’s see… I’m trying to think if this one adds much beyond the first film… Oh! Jack-Jack has a much bigger role. It was a lot of fun seeing his crazy powers – I think he was my (and my kid’s) favorite thing about this whole film. I’d have liked to see more of Edna Mode & Frozone (love them). But we maybe get a bit more time seeing the whole family working together as a superhero team so that was good. Umm. Huh. Honestly – I’m struggling to blog lately but I especially struggle with stuff like this. It’s Pixar so it’s great (as are all of them other than Cars). The Incredibles films actually aren’t my favorite of Pixar’s stuff (sorry!) but even my least favorite Pixars are better than the majority of animated kids’ films from other studios. Maybe when I get around to reviewing them I’ll have more to say about The Secret Of Marrowbone & Hotel Artemis, both of which I really liked. Hotel Artemis especially felt like something original, which is what I really crave & appreciate these days as I’m getting bored with superheroes & sequels.