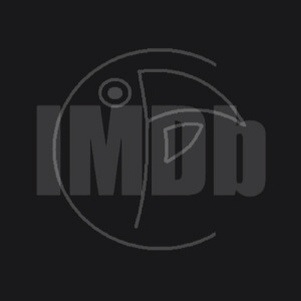 Today’s IMDB Top 250 Guest Review comes from Josh of JJames Reviews. He’s already done a review of Apocalypse Now (HERE) and Inglourious Basterds (HERE). Thanks so much for the reviews, Josh! 🙂 Now let’s see what he has to say about Casablanca, IMDB rank 25 out of 250…

Written By: Julius and Phillip Epstein, and Howard Koch

In the midst of World War II, a Jewish leader, Victor Laszlo (Paul Henreid) and his wife, Ilsa (Ingrid Bergmann), come to the city of Casablanca, part of unoccupied France, hoping to escape Nazi influence and reach the United States. Standing in their way are Major Heinrich Strasser (Conrad Veidt), a Nazi military man, and Captain Louis Renault (Claude Rains), a corrupt French police officer. Even more troublingly for Laszlo and Ilsa is that they need Rick Blaine’s (Humphrey Bogart) help, but Rick is seemingly self-serving and withdrawn. That he has history with Ilsa complicates matters, as well. 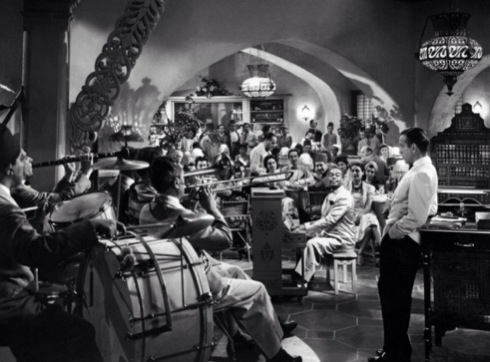 Casablanca is one of the best movies ever made, which means listing its merits proves more difficult than detailing its flaws:

And that’s it. Even those flaws, of course, are terribly nit-picky, as the first two span the picture’s final thirty seconds and have zero impact on the preceding magic, while the third is not, in reality, a mistake.

Casablanca’s screenplay is its foremost merit. With much memorable dialogue that has become part of Western culture, it is one of the most quoted movies in history.

Yet, the script’s greatest strength is not quotability. It’s character development. Rick, Ilsa, Renault and Laszlo are complex individuals, about whom we care, no matter their flaws. Sam (Dooley Wilson), an African American pianist, is layered by loyalty to Rick and emotional acuity, while Major Strasser, the antagonist, is not a comic book villain. Because he’s a Nazi, we do not like the Major, but director Michael Curtiz and his writers are smart enough not to make him stereotypically evil, instead opting to develop him as determined and efficient. Because all of the characters are so genuine, the filmmakers earn our emotional investment, and thereby ensure that Casablanca’s limited action is not a flaw.

It helps that the movie is not predictable, despite being character centric. Rick’s final gambit surprises us, as does some of Ilsa’s behavior. Even more impressively, however, is how well Bogart, Bergmann and Curtiz sell Ilsa and Rick’s romance, in two short scenes, no less. The first: Ilsa asking Sam to play “As Time Goes By,” a request Sam reluctantly accepts, knowing that Rick will respond badly. The second: a ten-minute in medias res flashback. We don’t see the beginning of Ilsa and Rick’s relationship, but we don’t need to, as the flashback shows us their depth of feeling. Therein is why Rotten Tomatoes fittingly calls Casablanca “Hollywood’s quintessential statement on love and romance.” 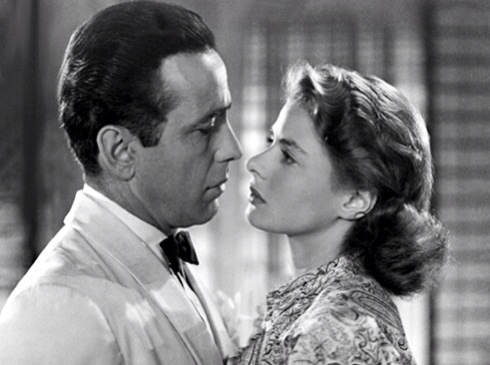 Curtiz’s technical decisions are just as good as his writers’ screenplay. This black and white film is lit so well that it is never less than visually stunning. Moreover, the director’s establishing shots set tone in every scene, especially when Laszlo and Strasser have a sing-off in Rick’s bar, when Ilsa surprises Rick in his own home, and when Rick is left heartbroken at a train station. Additionally, Curtiz cuts the movie as to surprise us and increase our anxiety, especially in the film’s climax.

Finally, all of the performances are excellent. Without Humprhey Bogart and Ingrid Bergmann’s soulful performances, Casablanca would not be half as good as it is. Peter Lorre steals his two scenes, as does Dooley Wilson, who makes us wish Sam had a bigger role. Paul Heinreid, Claude Rains and Conrad Veidt are equally note perfect. 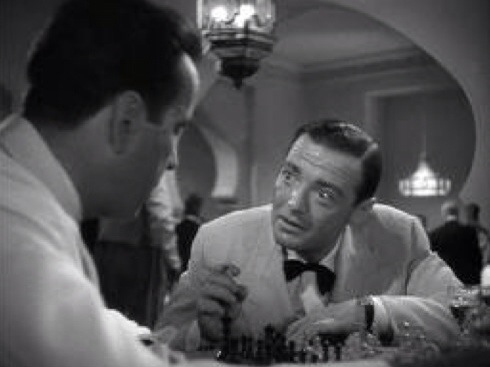 Conclusion: Almost flawless, Casablanca deserves its title as All-Time Classic. It is one of the best movies ever made. 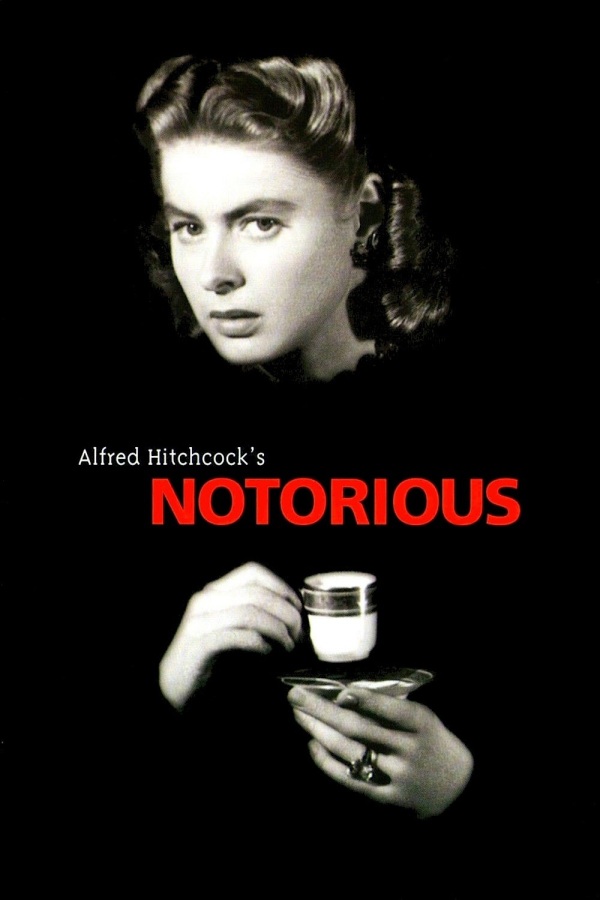 Alicia Huberman (Ingrid Bergman), the American daughter of a convicted Nazi spy, is recruited by government agent T. R. Devlin (Cary Grant) to infiltrate an organization of Nazis who have relocated to Brazil after World War II.

I’m working off the list as it was on 01/01/13. Unfortunately, Shadow Of A Doubt has now been knocked out of the Top 250. That’s a real shame. Again, far too many current films are knocking the classics out of the top 250 (don’t get me started on that). Anyway, I figured I’d work my way through the Alfred Hitchcock movies I’d not seen first. My previous reviews are here :

Shadow Of A Doubt Review

With Notorious, I’ve now seen all the Hitchcock films in the Top 250. 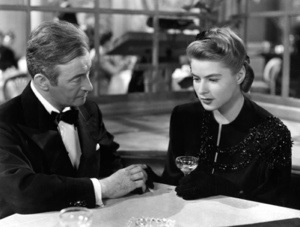 My Opinion on Notorious:

Of the three I watched to complete my Hitchcock Top 250-watching, I enjoyed Rope the most. Notorious is a close second but it felt very different from other Hitchcock films to me. The plot sounds intriguing & suspenseful but the story that unfolds is actually far more simple than in a lot of other Hitchcock films. This felt more like a romance film than a film from the master of suspense. Not that I’m complaining, though. Cary Grant & Ingrid Bergman have great chemistry and all that kissing was AWESOME. Seriously. They kissed. And kissed. And kissed. And having just looked Notorious up on Wikipedia, I read that there was actually a ban at the time on movie kisses more than three seconds long so Hitchcock got around this in Notorious “by having his actors disengage every three seconds, murmur and nuzzle each other, then start right back up again.” Well, it worked because those kisses felt like they went on forever. Loved it. 🙂 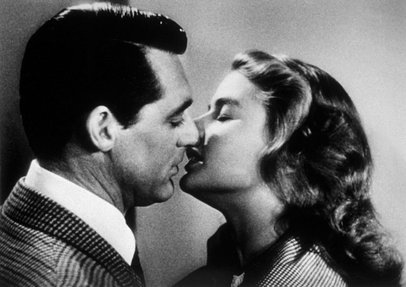 I’m still a bit new to watching classic films but I’m trying to watch more of them and working my way through the IMDB Top 250 should help with that a bit. I’ve not seen THAT many films with Cary Grant but even fewer with Ingrid Bergman (other than Casablanca but to be honest I was SO young when I saw that that I really should watch it again). She’s fabulous. Sexy. Why can’t more actresses be like that nowadays? Classy. And not exactly a thin little stick insect, either. Give me CURVES on women! Why am I going on about this? Lol. How about Cary Grant? So handsome and SO cool & aloof in this film. What is it about the cool & aloof men that I always find SO sexy? 😉 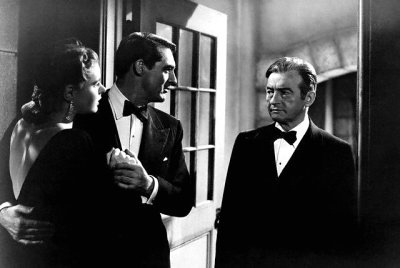 Okay – this film is about more than lots of sexy kissing (although that’s what I happened to enjoy the most about it). I don’t think I’m giving anything away by saying that Bergman & Grant’s characters fall in love in this (what with all that kissing talk). Or do they? You’re kept guessing on the true nature of their relationship throughout the entire film. Bergman is asked to go further and further into her deception of her father’s Nazi friends, forming intimate relationships with them and putting herself in great danger while never knowing if the agent who recruited her, Cary Grant, cares about her fate. These are the things that remind you that this is a Hitchcock film – there ARE some great moments of suspense in amongst all that sexy kissing.

Cary Grant & especially Ingrid Bergman shine in this excellent classic from Alfred Hitchcock. As to
be expected from Hitchcock, there’s some real suspense as Bergman’s character puts herself in great danger while infiltrating a Nazi organization. But the thing that really makes this film such a classic (for me, at least) is the smoldering romance between the steamy & passionate Bergman and the cool & aloof Grant. And ALL THAT KISSING. Great stuff. 🙂

(Oh, I’d just like to say how annoying it is that when you Google Notorious, it’s the Notorious B.I.G. movie that always comes up first!)