Plot Synopsis: (via Wikipedia)
The film deals with the story of two young girls abandoned in a forest cabin, fostered by an unknown entity that they fondly call “Mama”, which eventually follows them to their new suburban home after their uncle retrieves them.

Here we are with my first horror movie review for the month of October! You know I’ve clearly watched a load of shit this year if I’m starting with stupid Mama. Well, no one visits this blog on a Friday so let’s get this crappy movie out of the way first, shall we? 🙂

Why do 99.98% of modern horror movies suck? And why do I continue to watch them? I suppose I still live in the hope that one will at least be entertaining even if they’re not exactly “good”. Okay, there are two fairly recent ones that I actually loved: The Babadook & It Follows. But that almost makes things worse! Now I’ll have high expectations! But you know they’ll go back to pumping out nothing but shit like Mama & Insidious 8. 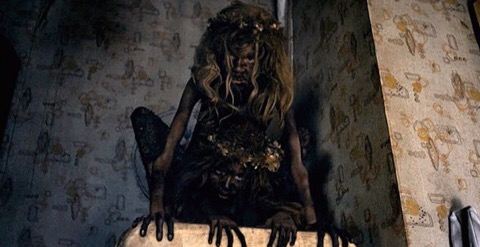 I suppose I have only myself to blame as plenty of bloggers trashed Mama before I saw it. Although, reading about this movie online, it got praised somewhat by critics. What?? Maybe us bloggers are becoming too picky or something. Anyway, I love a good supernatural story. And feral children… Feral children (and Satanic children, too) are the BEST! That’s why I love stuff like The Brood & The Omen. Well, the two girls in Mama are the sweetest feral children ever – I probably felt too protective of them since they were totally cute & weren’t psychotic little nutjobs. I also liked, being a mother & all that, the thought of an “entity” protecting the girls. But, dammit, did we have to see “Mama” SO DAMN MUCH?! Why do so many modern horror films do this? I’m far more scared by the things we don’t see or the things we only glimpse. How am I supposed to be scared of this?

What the hell is that shit? Is that seriously what scares audiences nowadays? You know, I suppose the actual story in Mama wasn’t all that bad. It’s a shame they felt the need to show her so much – I’d probably give this a halfway decent rating if it wasn’t for that. And, I was too lazy to look into it but is this one of those cases where a famous star made a crappy movie that didn’t get a full release but then, once they were famous, it did? If not, then what the hell was Jessica Chastain doing in this? I actually find her pretty seriously overrated but she can clearly get better work than this now (other than Interstellar – Mama is probably a better horror film than Insterstellar is a sci-fi film. no, seriously – I have far higher standards for sci-fi than for horror). At least we had hunky Nikolaj Coster-Waldau to look at in Mama… As TWINS! 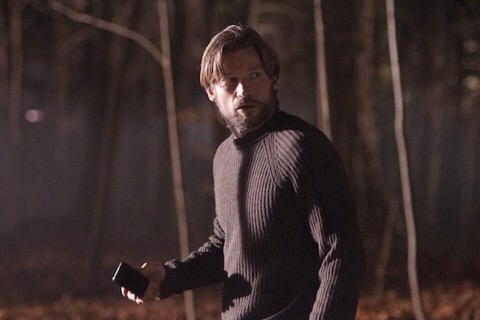 I actually forgot he was twins in this until Laura reminded me in our review chat for Headhunters (HERE), which is pretty pathetic as I only watched this a couple of months ago. I have such an excellent memory for great or really horrible movies & such a shitty memory for bland crap like this. Yeah, I prefer a truly horrible movie to something like this one as at least horrible movies are fun to take the piss out of & bitch about with you guys. Mama was just “So what?”. And I don’t want to get into spoiler territory too much in case anyone still wants to watch this but I hated the ending & I hated that there wasn’t “more” to the entity. There’s a story here that actually could have made for a more complex supernatural “villain” but that doesn’t really happen – it’s just good vs evil. Apparently this was a short film first? Well, I wonder what that’s like because the simple story seems like it would be better as a short film.

(Btw, Jessica Chastain is soooo not believable as some “rock chick” in this)

You know what? Screw all this. My hubby told me the other day that my reviews are no fun lately (he may have used the word “suck”) because it’s obvious that I can’t be bothered. Ha! Nice! I don’t care what he says – he went to see The Martian without me yesterday. How rude!

Anyway, I’ve never once claimed to be some kind of writer but he’s right that I can’t be bothered lately due to being too busy but, also, because I’ve watched too much stuff like Mama over the past few months. I seriously need to see a movie that gets me all excited about putting a post together again instead of it feeling like a chore (something like, hmm… The Martian hopefully?!). Mama was a chore. It was a chore to watch & a chore to think of anything to say about it for a post. 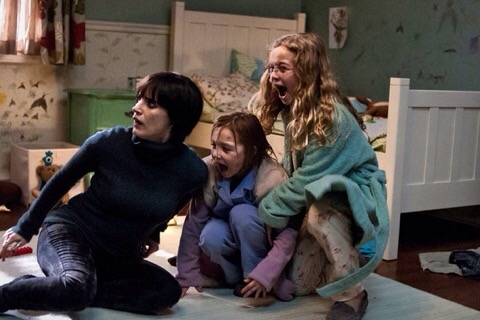 I know this review was really negative but I’ve definitely seen worse horror movies than Mama. The problem is just that I’ve seen this same sort of mediocre “supernatural horror” movie over & over again. Here’s the plot: There’s an evil entity, no one believes it’s real, someone does some investigating & discovers the entity’s tragic history, evil entity must then be defeated using the knowledge gained during that investigating that I mentioned. How original – I’ve never seen that story before!

I’ll end on a positive: Mama is an okay “stuck on the couch while off work because you’re sick” movie. That’s how I saw it (along with three others in the same day). Don’t make a big thing of it if you watch it. Like, don’t make it your big date night movie or something – you’ll be pretty disappointed. It’s at least a good movie to watch while throwing up in a bucket! 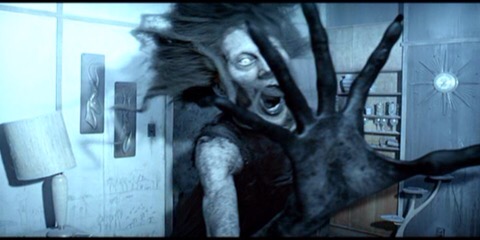