Here’s another trio of super short reviews of movies that I watched two years ago & barely remember now! What’s the point, you ask? Well, it’s annoying me that they’re still sitting HERE on my list of Movies Watched In 2014 without reviews attached to them. So, let’s get this over with. One paragraph each! Don’t expect any in-depth analysis. Not that you ever get that from this blog anyway… 😉 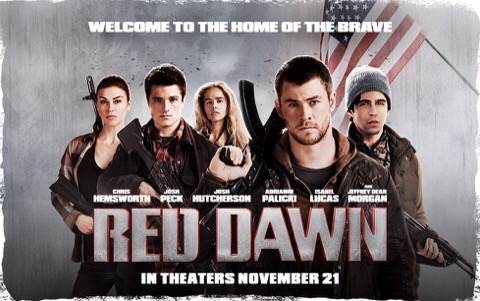 Plot Synopsis: (via IMDB)
A group of teenagers look to save their town from an invasion of North Korean soldiers.

Wow. It’s bad enough that so many pointless remakes keep getting made but it’s especially frustrating when they’re complete & utter shit like this Red Dawn remake. Don’t worry – I’m not going to be all “They shouldn’t have touched Red Dawn because the original is a classic!” since that was never an absolute favorite of mine & I’m not all precious about it like I am with a lot of other 80’s movies. But why take a mediocre movie & remake it into something 1,000 times worse?? Oh well! I only watched this because sexy Chris Hemsworth is in it (with his short hair – I prefer him that way). I don’t remember now who lives & who dies but I do remember completely losing interest and not giving a shit about any of the characters. I also remember that I watched this just after getting Netflix & they seemed to have a horrible selection back then (it’s much better now) so I wasted too much time on shit like this & that stupid ATM movie. Speaking of which, that weird little Josh Peck was in that one as well. He had a really bad year for movies between Red Dawn & ATM! Screw Red Dawn. Screw ATM. You know what Josh Peck movie was actually pretty good? Mean Creek. Just watch that instead. Don’t watch this. Not even for short hair Chris Hemsworth. He looks the same in The Cabin In The Woods & that’s much better. Do a double feature of Mean Creek & The Cabin In The Woods! Don’t watch Red Dawn. 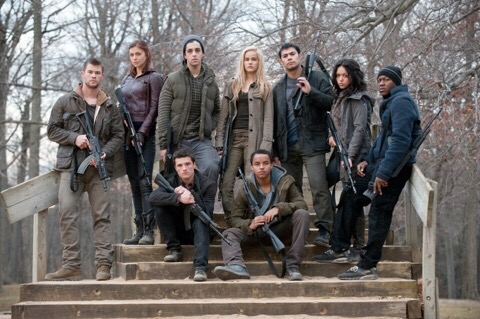 Plot Synopsis: (via IMDB)
While settling his recently deceased father’s estate, a salesman discovers he has a sister whom he never knew about, leading both siblings to re-examine their perceptions about family and life choices.

This was a decent movie – I’m not sure why I never reviewed it. Movies about family relationships don’t always appeal to me but this one, where Chris Pine finds out that he has a half-sister & nephew he never knew about, worked pretty well. I can’t stand Chris Pine but really like Elizabeth Banks plus the boy who played her son (Michael Hall D’Addario) was good so that helped. Oh! And Michelle Pfeiffer was in this too as Pine’s mother – love her. It was partly based on the life of the director, who first met his half-sister at the age of 30, so it probably also helped that the script was based on personal experience. I also liked this little bit of trivia HERE about the music memorabilia of Pine’s musician father in the film belonging to the record producer father of one of the script’s writers:

Much of the music business memorabilia in the “Jerry’s Study” set belongs to Jody Lambert’s father Dennis Lambert, a Songwriter’s Hall of Fame nominee whose hits as writer and/or producer include “Ain’t No Woman (Like The One I’ve Got)”, “Rhinestone Cowboy”, “Baby Come Back” and “Nightshift”.

Anyway, People Like Us isn’t going to change the world but it’s the type of movie that’s perfect to watch on a lazy Sunday afternoon. Good performances from those involved & I liked the story.

Plot Synopsis: (via IMDB)
A veteran pot dealer creates a fake family as part of his plan to move a huge shipment of weed into the U.S. from Mexico.

This movie is really not my type of thing and I don’t know why I watched it. I think I just wanted a simple movie on while I did stuff around the house plus I think I still kind of live in the hope that a modern comedy may actually turn out to be funny. Nope! This is yet another stupid modern “comedy” that failed to make me even crack a smile. Maybe I’m just old & bitter since I’ve liked hardly any comedy films since 1992? Comedy isn’t my favorite genre but I think the fact that so few movies are ever actually funny anymore is to blame for me going off the genre in recent years. Wait! I may have cracked a tiny smile when Will Poulter’s balls were bitten by a spider & they swelled up to an unnatural size while the movie showed us his whole package in gory detail. That was brave of Poulter as I’m sure a lot of people think “spider balls!” anytime they seen him in anything now. Although, I’m pretty sure we were seeing stunt balls. How does one get a job as a stunt penis? Anyway, maybe this movie wasn’t crude enough for me if that’s the only memorable part for me. I mean, I do like the Jackass movies & Bad Grandpa so, what the hell, I can’t figure out my taste in comedy. But I thought We’re The Millers was shit. Except for spider balls being mildly funny… 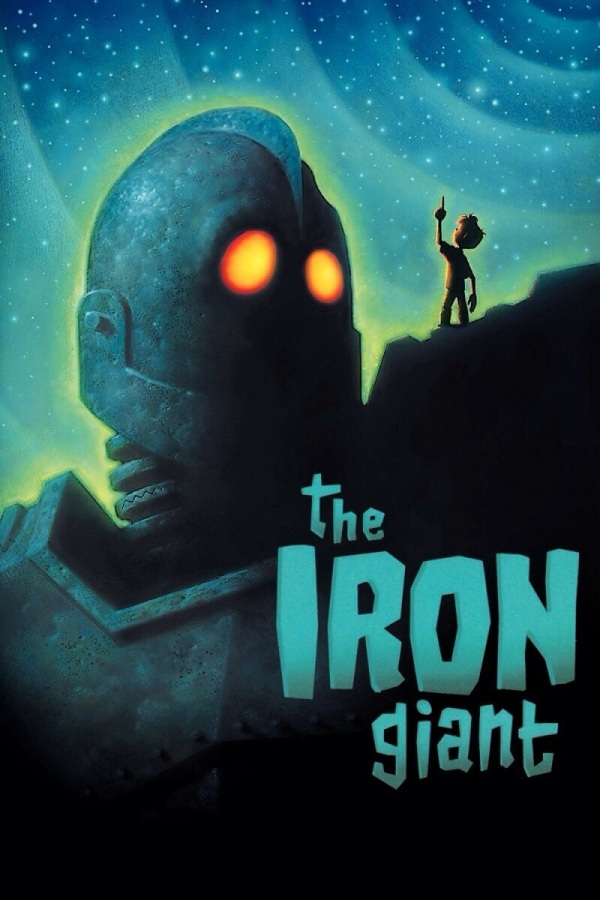 Based on The Iron Man by Ted Hughes

Plot Synopsis: (via Wikipedia)
The film is about a lonely boy named Hogarth raised by his mother (the widow of an Air Force pilot), who discovers an iron giant who fell from space. With the help of a beatnik named Dean, they have to stop the U.S. military and a federal agent from finding and destroying the Giant. The Iron Giant takes place in October 1957 in the American state of Maine during the height of the Cold War. 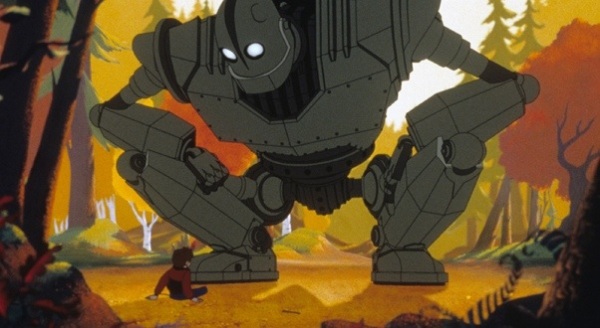 This is a great film and I don’t understand why it isn’t more well known than it is. Well, maybe it is – It must be popular amongst certain artistic types since there are lots of amazing alternate posters for the film online. Someone collected a bunch of them here – they’re awesome!: geekynerfherder.

I’m not going to go into this much. I re-watched it last summer after not seeing it for years and it’s the only film that I watched in 2013 that I have yet to review. With over 100 reviews here now, I decided it was time to finally alphabetize them all (You can make me really happy by clicking on this link because it took me ages to do this!: Reviews A-Z). 😉

The Iron Giant was directed by Brad Bird, the genius behind Pixar greats The Incredibles & Ratatouille. There are two main things that I love about The Iron Giant. The first is The Giant himself. I love the look of him and of course the way he becomes friends with Hogarth and the way he learns about humans and develops a personality. He reminded me a lot of the Laputan robots in Laputa: Castle In The Sky – I loved that movie & the robots are a big part of the reason why. I also absolutely adore WALL-E (one of my all-time favorite films) so I think I may just be a sucker for robots with a heart….

Secondly, I love the message in this film. I know it’s not one that’s for everyone, though. From what I read on Wikipedia, Bird pitched this film around the idea “What if a gun had a soul?”. The book was written in 1968 but Bird chose to set the film during the Cold War in 1957 and I think this time period works perfectly for the film and its peaceful anti-war, anti-weapon, anti-paranoia message. It also works in that this was a time of great sci-fi B movies and The Iron Giant’s look and feel fits in perfectly with that as well. Its story is like that of many of the great old Twilight Zone episodes (which is a huge compliment as I think that’s the greatest TV series ever). It would be interesting, actually, to see another adaptation of The Iron Giant set in modern times as the paranoia during the Cold War is nothing compared to today’s and gun violence is ridiculously out of control. Oh shit…. Back away from that topic…. Back away…… Slowly….!

The Iron Giant is a classic. Don’t let my talk of its “message” put you off – It doesn’t ram its beliefs down your throat (I hate movies that do that). It keeps things simple & just tells it like it is. Come on – it’s made by Brad Bird, who became a part of Pixar. You know you can trust anything Pixar-related! And you can trust me too. I think all families should sit down and watch The Iron Giant together. If they did, maybe the world would be a better place. 🙂 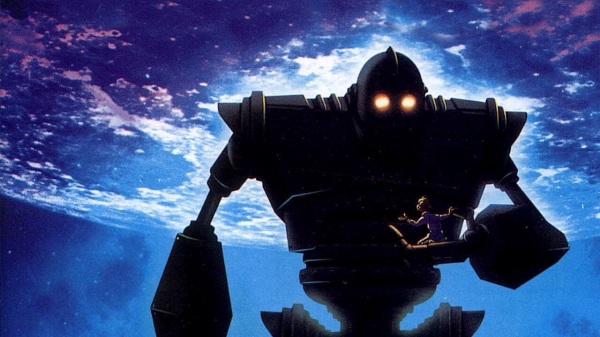