Happy Birthday to Kirk Douglas, who turns 100 today! I recently did a list of My Top Ten Michael Douglas Movies & commented that I’d only seen one of his father’s films (Paths Of Glory, and that was also quite recently for my defunct IMDB Top 250 Project). I know – it’s shameful to be a movie blogger & to have seen so few movies from someone who has been around as long as Douglas! So I vowed to watch Spartacus & review it on his birthday. Well, Spartacus isn’t very “me” and I shamefully still haven’t watched it. However, I did watch one of his films. Brian De Palma is more my speed so let’s have a look at The Fury, my second Kirk Douglas movie! Maybe I’ll do Spartacus for birthday 101… 🙂

Based on The Fury by John Farris

Plot Synopsis: (via IMDB)
A government agent is determined to come to his son’s rescue when a sinister official kidnaps him to harbor his extremely powerful psychic abilities.

Well, damn, I guess I should’ve watched Spartacus… The Fury is honestly not very good. 😉 How disappointing! I’ve wanted to see this for years, ever since a scene from it was shown as part of an art installation I saw at the Tate Modern. I don’t remember the artist now but it was a series of scenes from movies involving psychic powers and I’d never heard of The Fury before then. I know De Palma’s filmography is a bit all over the place but I’m a fan of quite a few of his films, especially his Seventies ones such as Carrie & Phantom Of The Paradise. Even Sisters (1972) was better than this. Considering that The Fury is dealing with the similar supernatural/horror themes that I enjoy, I guess I was hoping for something better. Heck, even Firestarter was a better look at telekinesis & the secret government study of individuals who possess these powers. But I do love Stephen King (and Drew Barrymore!). Unfortunately, The Fury pales even further in comparison to De Palma’s adaptation of King’s telekinetic masterpiece Carrie.

I guess I’ll start with Kirk Douglas since I watched this in honor of his birthday. He plays the man whose powerfully telekinetic son is kidnapped by government baddies who want to harness this power. The movie starts out well with the action-packed kidnapping but later turns silly as a half-naked Douglas humorously steals some clothes from a couple & friendly elderly mother and then hitches a ride with Dennis Franz going against character & playing a cop. By the way – Douglas is half naked a lot in this. Is this a Douglas thing? I assume he’s half-naked in Spartacus a lot too. Anyway, the movie has such an uneven tone for a while there with some almost comic relief going on. It was bizarre as there’s none of this whatsoever in the rest of the movie, which has a serious & more horrific tone than I was expecting. Because, you see, using your telekinetic powers on people makes them bleed profusely out of every motherf*%#ing orifice! It was super gross. Well, until the end… The special effects for the big climactic moment were so hilariously bad that I genuinely laughed out loud (I’m not a “LOL”er). And I’m not a special effects snob! I grew up on dodgy old effects. DAMN the end of this was funny as shit, though. 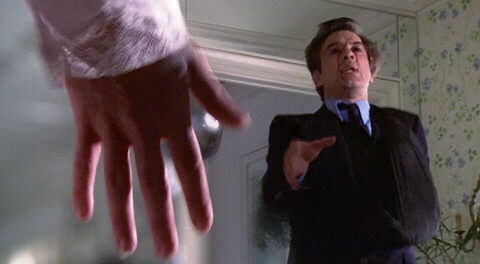 Oops – I went off topic. I was talking about Douglas! Well, he does what he can with a dodgy script, I guess. I’ll give a more “worthy” film of his a go at some point. I was excited to see Amy Irving in another De Palma/psychic ability film after Carrie & it’s cool that she has the ability this time. She’s probably the best thing about the movie, actually, along with the love interest of Douglas (played by Carrie Snodgress). It probably helped that their roles didn’t contain any weird-ass humor while the male roles in this film were lame (especially the son of Douglas – I’m surprised that the kidnappers didn’t want to give that moody, whiny fucker back to him). 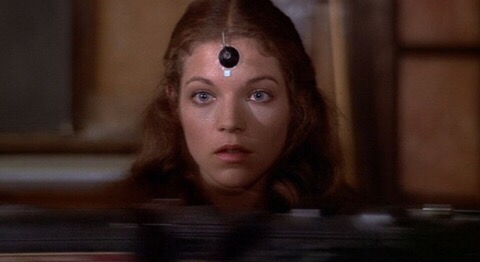 My review is as off-the-rails as this film’s plot. I admit my mind wandered & I fucked around on my phone instead of paying much attention to the movie after it got silly. No wonder it had all that orifice bleeding! That’s the only time it got interesting & distracted you from the meandering plot and the fact that you didn’t really care about Douglas finding his asshole son or not. I’m trying to remember what I did on my phone while this movie was on… I think I wrote my review for Stephen King’s Mr Mercedes (Good book. Hey – King connection!). I’m pretty sure I added a bunch of pointless shit to my Amazon Wish List as well. I currently have a variety of those Japanese good luck cats knocking about in my wish list. Why do I do that? It’s not like I’ll ever BUY myself that kind of stuff. I also have an insane amount of Studio Ghibli toys & Kokeshi dolls in there. Someone buy me this stuff for Christmas so I can take them off my Wish List! 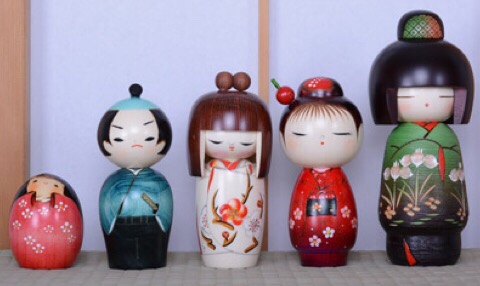 Speaking of Dennis Franz above (honestly – I did mention him in my rambling), my favorite thing about watching old movies like this is spotting celebrities that I grew up watching. At least I got something out of The Fury – there were some great obscure actors! I’m pretty sure I saw that chick who was on ER for years (Dr. Weaver) and freaking Nikki Newman from The Young & The Restless!!! HA! I miss that stupid fucking soap opera since moving to the UK. Is Nikki still married to Victor? God those two were annoying. Oh! And when I looked up The Fury at IMDb I saw that I missed Daryl Hannah in this as well as Large Marge from Pee-wee’s Big Adventure! Now THAT’S a good movie. 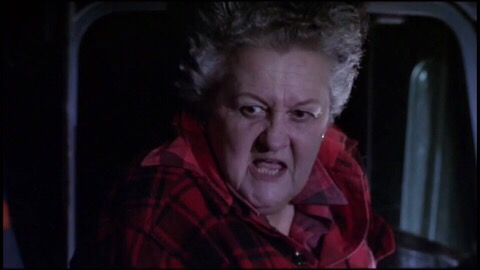 Um. Screw it – this “review” is going nowhere. Happy 100th Birthday, Kirk Douglas! I’m sorry I’ve not watched more of your films as I’m sure most of them were better than The Fury. But, hey – I still think De Palma is cool & like even some of his “bad” films (other than Mission To Mars – that truly sucked). No shame in being in a De Palma film! I have no doubt that The Fury has a cult following & feel bad that it didn’t work for me. I’m now going to give this a halfway decent rating since, hell, I guess I did get some fun out of it. And a good laugh at that ending! 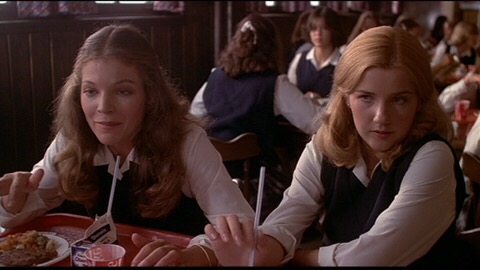 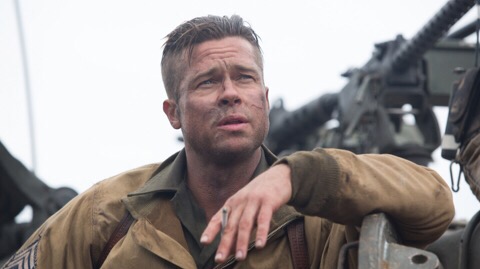 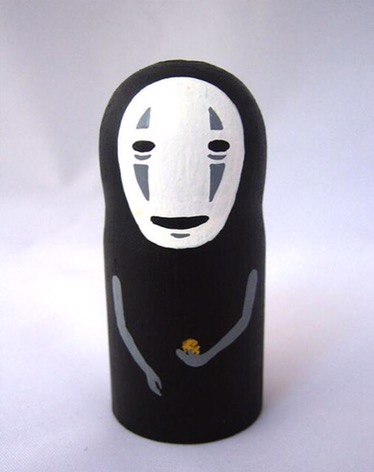 The No Face figure from Spirited Away which has been in my wish list for years! Years! He’s lonely. He needs someone to buy him for me.