Plot Synopsis:
Calvin Weir-Fields (Paul Dano) is a novelist who, while suffering from writer’s block, creates a character named Ruby Sparks (Zoe Kazan). Calvin starts to fall in love with her and, much to his surprise, wakes one day to find a very real Ruby Sparks in his kitchen.

I’d been wanting to see Ruby Sparks for ages because I LOVE the idea. It’s such a simple idea for a plot, really, but there were so many ways they could have chosen to go with the film. What would you do if you could write a person into existence & have complete control over them? How many of us would do the right thing & how many of us would abuse that power? I like movies that explore the ramifications (that’s a big word for me!) of situations such as this one. 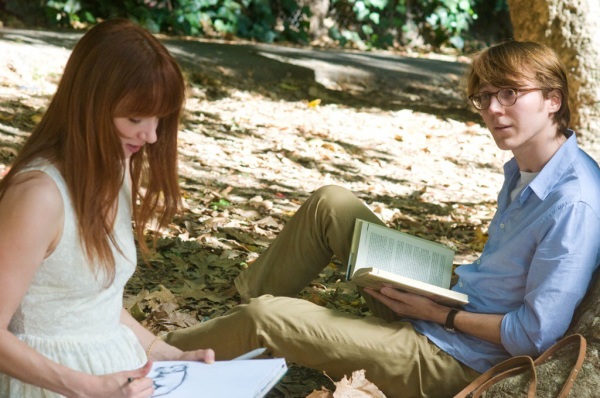 Instead of one of my wordy reviews where I go on & on, I’ll keep this simple. I enjoyed Ruby Sparks. It’s a great story AND I even really liked how they chose to end it. There were many different ways they could have gone with the ending & I found it a satisfying conclusion (I’m often disappointed by how films end). The whole script seemed solid and was apparently written by the girl who stars as Ruby Sparks (Zoe Kazan). I don’t know anything about her but I think she shows huge promise as a writer based on this film. She was also probably the highlight of the film as far as the characters were concerned.

I wasn’t crazy about the character of Calvin but that could be because Paul Dano just kind of rubs me the wrong way. I feel bad saying that kind of stuff because, you know, Paul Dano might read this someday & then I’d feel bad. Other characters such as his mother & her boyfriend (Annette Bening & Antonio Banderas) and his therapist (Elliott Gould) are just quirky enough in that indie movie sort of way without being annoyingly so. Calvin’s relationship with his brother (Chris Messina) is the most interesting one in the film (outside of his relationship with Ruby, of course). His brother has different theories on women & relationships and has his own opinions on how Calvin should deal with having the ability to control Ruby just by writing whatever he wants about her.

The movie asks a good question – if we could actually change our partners and make them exactly the way we want them, would we and, more importantly, SHOULD we? I loved the story & it’s handled very well but, overall, it’s not a movie I’d really feel the need to watch again after seeing it the one time. I didn’t fully connect with the characters (particularly Calvin, who is quite depressing – it’s clear why he’s had so much trouble with relationships in the past). Ruby is a good creation, though, and it’s a very good script – I’d watch another movie written by and/or starring Zoe Kazan.