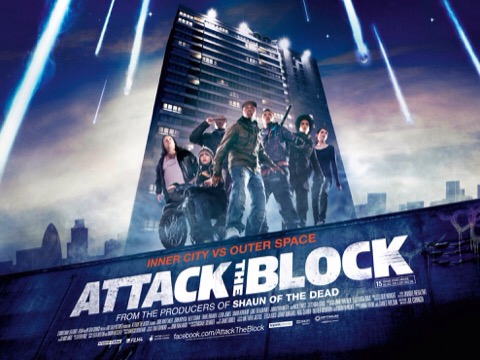 Plot Synopsis: (via Wikipedia)
Attack the Block is set on a council estate in South London on Guy Fawkes Night, and, with some coming of age themes, the plot centres on a teenage street gang who have to defend themselves from predatory alien invaders.

I watched this months ago & I’m still not really sure why I did. A movie about a bunch of teenage thugs? A group of people everyone hates?! The UK has enough of a problem with teenagers who engage in intimidating, anti-social, and sometimes criminal behavior while wearing hooded sweatshirts over their heads to hide their faces. They’re a very unsympathetic group so I think a lot of people were a bit “Really?” when a movie came out about teenage thugs fighting aliens. In fact, this movie starts out with our group of teen “heroes” mugging a woman at knifepoint. So how could I possibly like this movie?? I don’t know but I really did! Attack The Block falls into a category I’m always happy to be able to add to: Pleasant Surprise.

I should first address the fact that John Boyega stars in this film. I’m sure all movie bloggers know his name but, come December, the general public will as well since he has a large role in Star Wars: Episode VII – The Force Awakens. He’s been in very little so far so I’m sure Attack The Block has gotten more attention since he got the Episode VII role as people will now be curious to see what he’s like. Well, I’d say Attack The Block is well worth the watch if you’re at all curious. Boyega was very good in this (actually the best thing about it besides the pretty cool aliens) & I can’t wait to see how he does in his Star Wars role now. Oh, and I of course still also highly recommend Ex Machina to see an excellent sci-fi film starring TWO Episode VII actors: Domhnall Gleeson & Oscar Isaac. Actually, these two films would make a cool sci-fi double feature! It would also go very well with another action packed & violent film in which a London street kid becomes the “hero” – Kingsman: The Secret Service. Yeah! These two would be great fun to watch together…

Just so you know, in case you do watch this, I didn’t exactly hate teenagers any less after watching this. The woman they mug at the beginning has to team up with them later against the alien invaders and most of the teens continue to be disrespectful little pricks. Apart from Boyega’s character, no one exactly “sees the light” & decides to no longer be a teenage criminal or some shit like that. But, hey – this isn’t a Disney movie! It’s a rather violent sci-fi action movie and it’s just meant to be fun. Not every movie needs a moral. There are lots of angry reviews on IMDB from people who hate the behavior of the kids in this but, seriously – lighten up, people! Teenagers are horrible. Always have been, always will be. At least a movie actually portrays modern day teens accurately for a change. 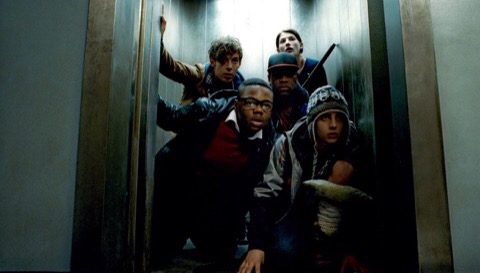 Now that I’ve made this movie sound horrible, I should try to explain why it’s not. Actually, I’m not sure why I enjoyed this so much, to be honest! Part of the reason is probably because I thought the aliens were pretty cool & effective. For the budget, I think they got the right balance in making what appears to be actors in furry gorilla suits look surprisingly good. I’m old school so I hate the overuse of CGI. I mean, look at Alien & Aliens! NOTHING has ever again looked as cool as those films do. And look at original trilogy Star Wars compared to CGI-bullshit prequel Star Wars! Give me puppet Yoda & get your CGI out of my face. Okay – one of the coolest things about these aliens is that they have these scary, glowing jaws & teeth that may have involved a little CGI? I’m not entirely sure but a little is fine! I know I read the filmmakers used as little CGI as they could get away with in this film. They kept the alien design very simple & I liked that a lot and think it worked really well for this film. I’ll keep the look of them a surprise for anyone who hasn’t seen this but it kind of sucks that all I then have to post is a bunch of pictures of hooded teens, making this look like some London gang film instead of a cool alien sci-fi movie. Hmm. Here’s a picture of the lady they mug. And Nick Frost, who plays the council estate’s weed dealer.

Attack The Block is a really fun alien invasion movie with a lot of action (and quite a bit of violence – I wouldn’t actually let the youngest teens who starred in this watch it!). The aliens had a great look to them and I found the setting of a South London council estate to be a very original idea for a sci-fi film. While some of the teenage thugs are unlikeable, there are a few who aren’t and they did a good job giving all the characters their own personalities considering that it’s a fairly large cast. I’m a fan of Basement Jaxx, who did the score, and they threw one of my very favorite rap songs in here (Sound Of Da Police by KRS-One). I’m interested in seeing what will happen with Joe Cornish’s career as he’s co-written Ant-Man & will be making the Snow Crash film. Attack The Block is from the producers of other British films such as Shaun Of The Dead & Hot Fuzz and, although it’s not a “comedy” in the same way those are (even though it’s labeled as action, comedy & sci-fi), I think you may like it if you liked those. It’s certainly not as good as Shaun Of The Dead but I’d have to say I preferred it to Hot Fuzz. It’s more my kind of thing, though – I love a good alien invasion movie.