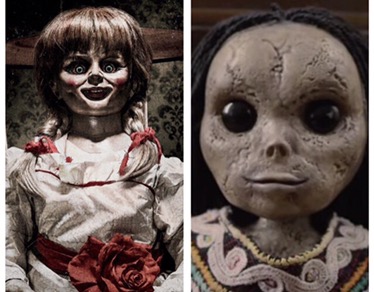 Welcome to Day 4 of Creepy Dolls Week here at Cinema Parrot Disco! I’ve already reviewed The Boy, Magic, and the imaginatively-titled Dolls. Now let’s have a look at two creepy doll films that, quite frankly, sucked. But, hey – most of the films in this subgenre are pretty crap anyway. More importantly: Are the dolls creepy or not?? Let’s find out… 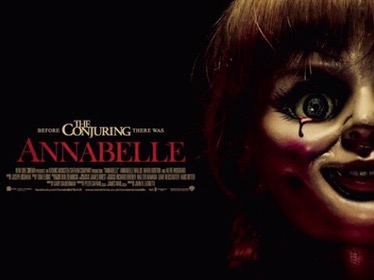 Plot Synopsis: (via IMDB)
A couple begins to experience terrifying supernatural occurrences involving a vintage doll shortly after their home is invaded by satanic cultists. 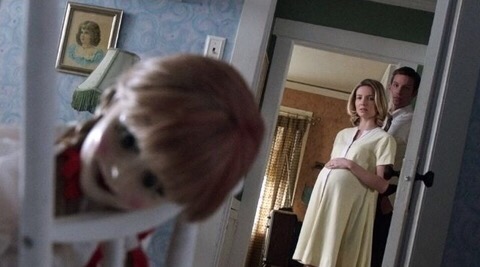 Annabelle the doll appeared in a short story at the beginning of the rather good (for a modern horror film) The Conjuring. She is a possessed doll from the real life case files of supernatural investigators Ed and Lorraine Warren (or whatever title they go by). The “true story” of Annabelle the doll, as told pretty accurately in The Conjuring, is quite interesting & unsettling. (Read it & see the real pictures HERE. Although you may be a little less creeped out when you find out that “Annabelle” is, in reality, a Raggedy Ann doll). The completely made up story in the movie Annabelle is a pathetic attempt to cash in on the interest shown in the creepy doll at the beginning of The Conjuring. The true story is far better and I’m confused as to why they didn’t just use that instead of making up a silly (and not at all scary) story. 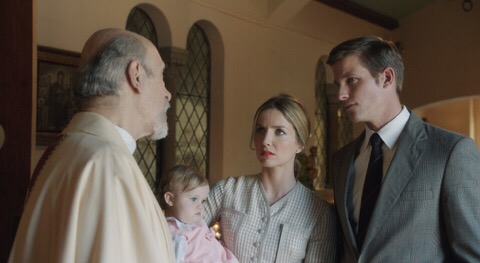 Well, no – it’s obvious why they made up a new story. The story of Annabelle works best as a short story & the whole thing was already covered in The Conjuring. But Hollywood has to make money. Like a vampire, it has to suck the lifeblood out of every idea it can sink its teeth into. 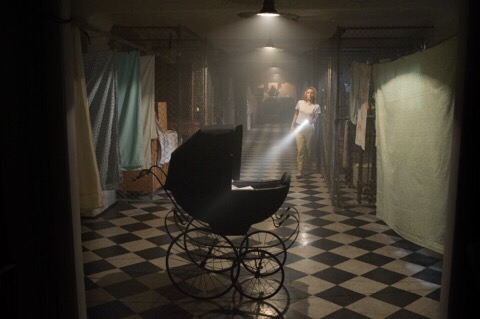 I think one of my biggest problems with this film, meant to be set in 1970, was the look of it. Look at the pictures in this post – it looks like a low budget TV movie. It felt like they bought all the movie’s sets from IKEA’s retro ’70s Ödmjuk Smörboll line. Yeah, I totally Googled “IKEA product names” just now & then got sidetracked and read an article about the system IKEA uses to come up with those strange product names and, seriously, the article was a million times more fascinating than this movie. Anyway! The furniture, clothing, hairdos, etc, just looked so fake and the main actress looked more like she should be on the set of Friends with that hair & makeup. What’s most surprising is that The Conjuring got the look of this time period SO right and, if I’ve read this correctly, Annabelle’s director was the cinematographer for The Conjuring?? Hmm. Well, to be fair: I’m guessing that Annabelle had a far smaller budget. 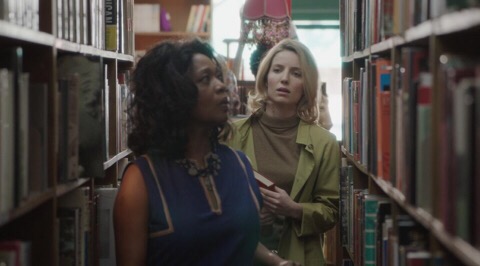 I really like Alfre Woodard so it was nice to see her in this & she was great as always. But I like when we see her in bigger roles as it feels like she’s often on the sidelines and the same happens again here. Also, I can’t believe that the story used her in such an outdated fashion! I realize it’s set in 1970 but the movie was made now. Why are they still using this ridiculous trope? Oh well – at least we got some quality acting (no one did a bad job in that department, really). 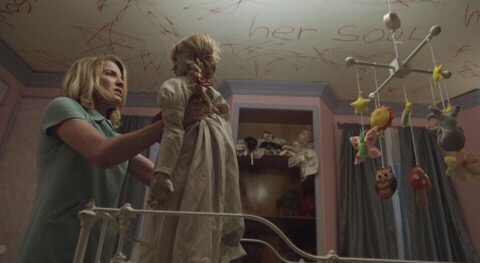 I’m sounding way too bitchy. It’s not like I’ve ever made a movie, right?? To be fair, Annabelle was exactly what I expected: a braindead cash-grab that I could zone out to for an hour & a half. Not gonna lie – I’m tired & I don’t always want to think. No one wants to think all the time! Sometimes we just want to stare at a TV screen like zombies while chewing on some flesh (although I prefer popcorn). Therefore, I didn’t have a horrible time watching this. I enjoy movies about possessed dolls & have watched a lot of them even though very few of them could be called “good”. Annabelle probably ranks somewhere right in the middle if you were to compare the movies in this subgenre (I’d need to see quite a few more before I could really rank them, especially as I shockingly haven’t seen the Puppetmaster films).

Meh. Whatever. I’ve seen this now. I won’t remember much of it in a year. Annabelle herself is a pretty creepy looking doll, though, so they did an okay job with her design. Like the movie, she’s probably somewhere right in the middle of a “creepy movie dolls” list. Yes, I’ve made that list! You can see where I’ve placed her tomorrow. Unless, like the real doll, she mysteriously moves. 😉 (Oh crap – I’ll shit myself if that happens… Why did I type that?! SHE’S NUMBER NINE!!!! Remember that!) 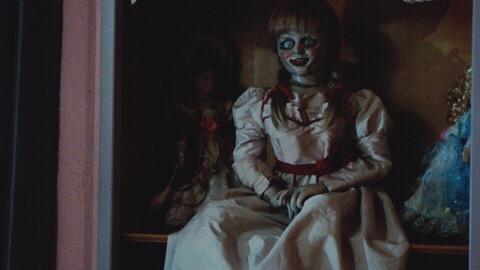 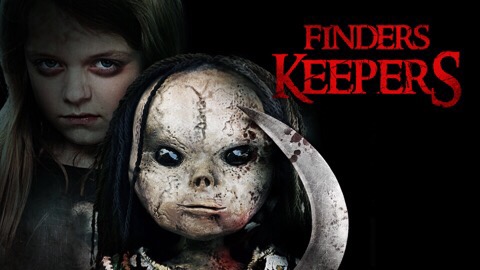 Plot Synopsis: (via IMDB)
A divorced mother of one is thrown into turmoil when her young daughter becomes obsessed with an evil doll left behind by the previous occupants of their new home. 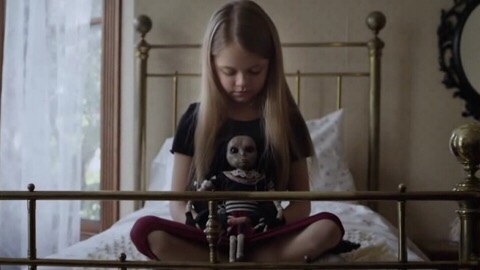 I really went off on one there on Annabelle! I didn’t even hate that as much as it probably seemed. Annabelle deserves an Oscar compared to this. Don’t worry – I promise to not be as bitchy this time & I’ll keep this one short. 😉 This is a TV movie & I watched it with very low expectations. I suppose I was more harsh on Annabelle as I do have higher standards for a Hollywood film with a bigger budget. 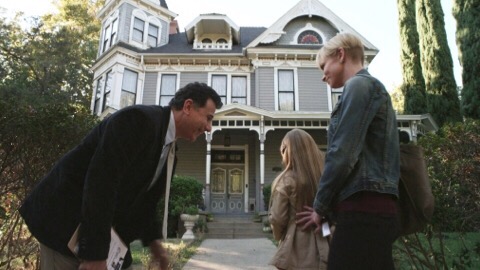 I watched this for three reasons: 1) I knew I’d be doing Creepy Dolls Week and 2) It was on Netflix and 3) I noticed that the little girl in it (Kylie Rogers) was the girl from the underrated Space Station 76, which is one of my favorite films I’ve watched this year. I loved her character in that movie: sweet, lonely, and heartbreaking. She’s fine in Finders Keepers but it’s such a poorly written character. What a shame. At least she has SS76 in her credits – it’ll be interesting to see if she goes on to do many more films. 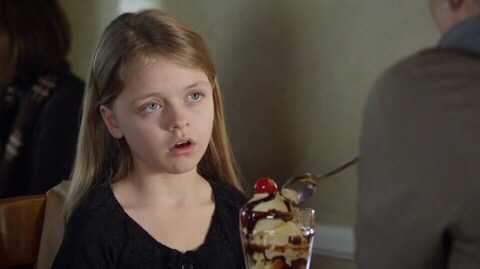 If you’ve ever watched another horror movie in your life, you’ll know the whole story already. Newly divorced mom moves into new home with daughter, daughter finds super ugly doll hidden in the floorboards which is naturally possessed because all super ugly dolls are possessed, mother has to investigate the history of the doll in order to save her daughter (using the expert opinion of a friend who falls into the same sort of ridiculous trope as Alfre Woodard’s character in Annabelle). 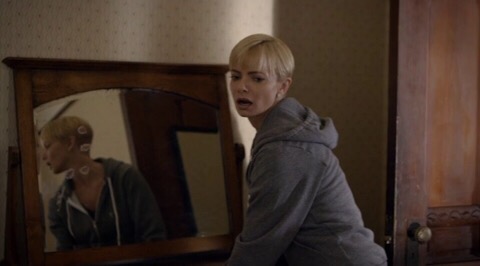 SPOILERS – I’m going to tell you who dies! Because you already know as everything is so damn obvious & cliché.

Oh look! It’s Marina Sirtis from one of my favorite ever TV shows (Star Trek: TNG) as the new friendly neighbor. She’s so dead! Wow – they got Saw’s Jigsaw himself, Tobin Bell, to play the child psychologist who suspects the girl’s mother of child abuse instead of the crazy psycho doll hurting the girl. Jigsaw: So Dead. Ex-husband’s new girlfriend: DEAD. Mother’s friend, a college professor (I think?) who is an expert on the type of voodoo or whatever the hell was going on with the doll – I wasn’t paying a whole lot of attention because I was bored: So VERY dead! Professor’s assistant: Dead. Um, who else? Oh, that woman with the really recognizable face! Wow – I can’t even remember her character now. Was she a waitress? This movie doesn’t even have a Wikipedia page so I can’t check. Ha! She’s such a “Hey, it’s that gal” actor, though. She was clearly brought in just to: BE DEAD. 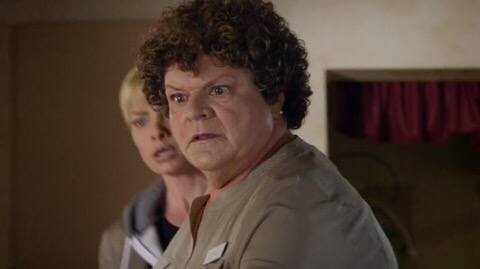 I think there may have been more but I can’t remember. Guy who sold them the house, maybe? This movie had a high death toll! What about the mother, daughter & ex-husband (who turns out to be nice)? ALIVE! Of course. And living happily ever after. At least, until that cliché “let’s leave this open for a sequel” ending.

So, yeah – Finders Keepers isn’t a good movie. But it’s a TV movie & I’ve seen worse (I was obsessed with TV movies when I was younger & had spare time to watch loads of shit. So. Much. Wasted. Time.)! At least it had recognizable faces in it (stick to comedy like My Name Is Earl, Jaime Pressly! Loved that show). Is the doll creepy? Fairly. I’d say the doll has a decent design. It doesn’t have a massive head like in the movie’s poster at the top, though. It’s hilarious that it looks as big as the girl in the poster. 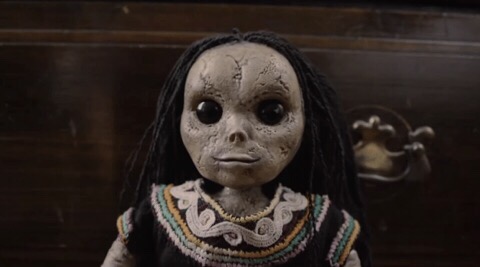