Based on Mockingjay by Suzanne Collins

Plot Synopsis: (via IMDB)
As the war of Panem escalates to the destruction of other districts by the Capitol, Katniss Everdeen, the reluctant leader of the rebellion, must bring together an army against President Snow, while all she holds dear hangs in the balance. 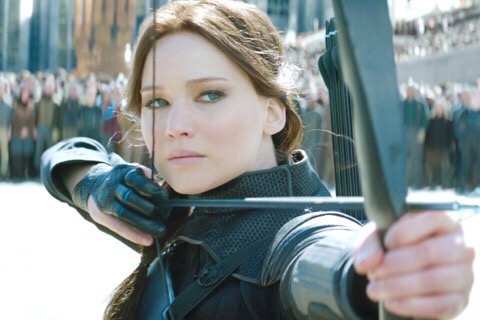 Well, I was attempting to take a week off from blogging but I just watched the final Hunger Games film so figured I should say something about it before the weekend (I also watched Steve Jobs this week but a review for that can wait until next week). Hmmmmmmmm……. Mockingjay – Part 2………….. What can I say? I want to stay very spoiler-free, even for those who’ve read the books as I’m sure the readers will be very curious to know if certain things get changed. But I’m not going to tell you! I can say that I’ve read the books and was a very big fan (of the first two, at least. like most people). I also think the first two films are very good. These final two, though? Well… I’ll get to that more in a bit. 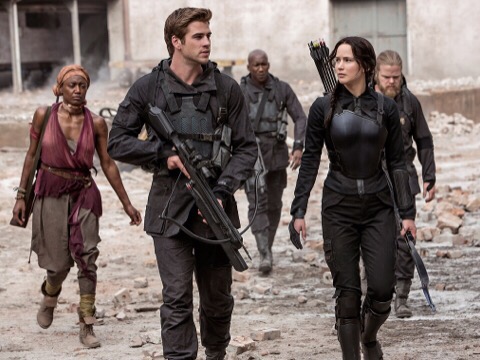 What’s interesting is that my husband, who hasn’t read the books, had quite a different reaction to this film than I did. He thought the first two were good but did NOT like these final two. He had a lot to say about it but I’m not going to go into any of that – I just find it interesting that he disliked these final two so much & wonder if others who haven’t read the books will have the same reaction that he did. I think they probably will. I think they’ll feel exactly the same way about the final two films as us book readers felt about the final book. 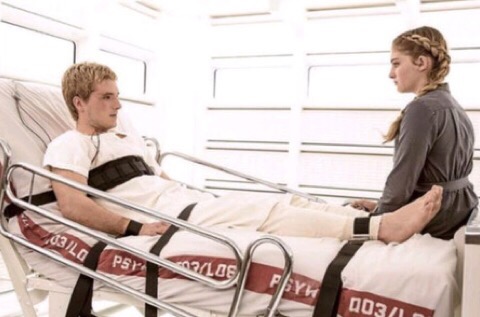 I think The Hunger Games book trilogy is fantastic. I know it’s “YA”, which puts some people off. But it’s nothing like things such as Twilight – Collins is a great writer and the first two books are two of my very favorites that I’ve read in the past decade or so. Yeah – the first two. Not the final book. I think most readers felt the same way about that one.

I don’t know how to go about reviewing this movie as, for me, it’s impossible to review it on its own & not compare it to the book. No, I didn’t like the final book. So… I was never going to love the final two movies (not helped by the fact that splitting one book into two movies pisses me the hell off). As a whole, though, these movies are quite faithful adaptations & that’s always very important to me. It’s been a long time since I read these but Mockingjay – Part 2 is very faithful from what I remember (without giving away to the books’ readers whether or not anything big was changed). So, I can’t fault the two Mockingjay films. They did what they could with them and remained pretty loyal to the source material. Which is great! It’s just unfortunate that the source material isn’t so great.

I haven’t reviewed the first film as I wasn’t blogging yet but I reviewed Catching Fire (HERE) and Mockingjay – Part 1 (HERE). Catching Fire was really good (I gave it 8/10) but Mockingjay – Part 1 felt pointless as there was no need to turn it into two films (I gave it 7/10). Part 2 is at least a bit better than Part 1 since you finally get a conclusion instead of being left hanging halfway through a story. I once again enjoyed re-visiting these characters & stand by my opinion that Jennifer Lawrence was the perfect choice to play Katniss (although the hubby thought she seemed bored in these last two films, which I don’t totally agree with but do admit that it did feel that way a little at times).

Elizabeth Banks & Woody Harrelson have very small roles in this final film, which is a shame as they’re two great characters. The character of Peeta is once again a bit of a bore (sorry if you like him! but his character is a bit bland). One big complaint I’ve had all along & still have is that I don’t think they developed the character of Primrose (sister of Katniss) enough. Well, the books were kind of guilty of this as well if I remember correctly but they should have given more screen time to the two sisters and slightly less to the somewhat annoying love triangle. I don’t think the films fully gave you the sense of love that Katniss has for her sister and also felt they didn’t fully explain some important plot points to a movie audience that hasn’t read the books. I think I’d have been slightly lost during the two Mockingjay films if I hadn’t read the books.

I really want to hear from you guys what you all thought of this one & whether or not you’ve read the books. I’ve not yet read any other reviews so don’t know what kind of reaction this movie is getting but I’d guess that those who haven’t read the books will feel the way that my hubby did & won’t really like this film. As I said, I can’t really fault this movie as it’s a good adaptation and I think they’ve done a pretty great job in choosing the cast for this entire series (especially Lawrence). Mockingjay – Part 2 is a good film but I kind of lost interest in it in the same way I did with the final book. Obviously you’ll want to see it if you’ve watched all the others but don’t expect it to be much different than Part 1. However you felt about Part 1, you’ll probably feel the same about Part 2.

Sorry for that rather uninformative review! It’s a very hard one to talk about without spoiling things so feel free to discuss it with me further in the comments. 🙂 Just try to put a spoiler warning at the start.