Plot Synopsis: (via Wikipedia)
The plot centers on a goldfish named Ponyo who befriends a five-year-old human boy, Sōsuke, and wants to become a human girl.

Ponyo is very cute. Cutesy cute! Cute is a funny word, isn’t it? Like with Kiki’s Delivery Service & My Neighbor Tororo, Ponyo is a very kid friendly Studio Ghibli film. I’d say it’s actually aimed at the youngest age range of all as the two main characters are very young but it’s far more strange than Kiki’s Delivery Service so it MAY not be as popular with kids as that one. I guess it depends on the kid and if they like unusual stories or not.

Ponyo is an adorable little goldfish who longs to be human, especially after tasting human BLOOD! Lol. (No, really…). Basically, her father is human but, I think, magic or something so he now lives under the sea with all his “fish children” he had with some sort of huge Goddess of the Sea. Or… Something like that. Am I selling this to anyone yet?! 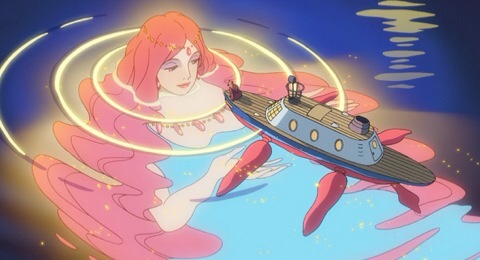 So… Ponyo’s father, who’s this weird cross between David Bowie & Alice Cooper, doesn’t want Ponyo to become human but she loves a little boy named Sōsuke who helped her & took care of her when he found her stuck in a bottle in the sea. She wants to be human & live with Sōsuke.

Ponyo’s Bowie/Cooper father looks super cool yet sounds like… Liam Neeson?! I first saw Ponyo years ago with subtitles, which I always prefer. I’ve only seen the dubbed version since as I have it recorded off TV & it’s the only version I have. I have got to buy the DVD. A character that looks like that dude above should NOT sound like Liam Neeson. And Ponyo, as adorable as she is, is very shout-y in the dubbed version. I’d like to see the subtitled one again to hear what she sounded like as I can’t now remember. The shout-y overexcited thing kind of actually works for this character as she’s still learning to be human and is so very happy. Looking this up I see that she’s voiced by Noah Lindsey Cyrus, Miley’s younger sister. Ha! Well, I don’t think subtlety runs in that family so a shout-y performance isn’t surprising. Like I say, it kind of works but I really wish to stop seeing the dubbed version. Again, though, you’re likely to watch this one with a young kid so you’d be watching it dubbed. Oh! But I have no complaints about Cloris Leachman, Lily Tomlin, and especially Betty White as the three old women. Those ladies ROCK. 🙂 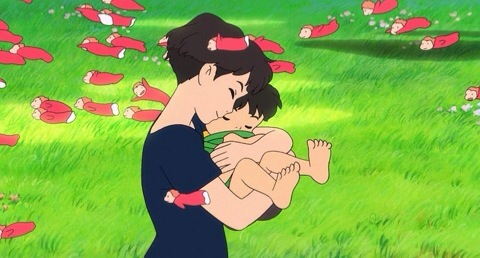 I haven’t really said much about this one. It’s a hard one to describe. It’s odd but also very sweet & innocent. It’s about unconditional love (Sōsuke must prove that he can love Ponyo whether she be a fish or human). I think young kids will love both Sōsuke & Ponyo and will just roll with the slightly odd story as young minds are usually more open to these sorts of things. It’s really not much more odd than a lot of Disney fairy tales. I do recommend this one to kids & to adult Studio Ghibli fans. Of all the Ghiblis, it’s definitely the most “sweet” and it’s hard to not like Sōsuke & Ponyo and seeing a love so pure. 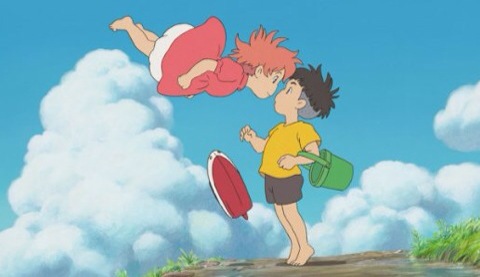