For the last Friday before Halloween, I thought I’d re-post my reviews of the only two Dario Argento movies I watched in the past two years. Certainly not up there with Deep Red, which I watched in 2019 & kind of loved.

I’m starting to feel like I’ve already seen all the best horror movies that have been made. And as I mainly only review movies that I watch for the very first time instead of revisiting old favorites, the majority of reviews that I posted for October Horror Month this year were for pretty rubbish films! Disappointing.

***DISCLAIMER: Hopefully I’ve grabbed images from the correct movies below as I don’t remember much of either of them now. Shit – the images are kind of impressive, especially for Inferno! I think the TV channel I saw it on had a dodgy copy or something because I don’t remember it looking that pretty. Maybe I need to give these another try?***

Plot Synopsis: (via Wikipedia)
The film concerns Roberto Tobias (Michael Brandon), who accidentally kills a man and is then tormented by someone who witnessed the event.

Was excited to see this Dario Argento film available on Amazon Prime as I’ve been wanting to explore more of the Italian giallo horror thing since finding Phenomena interesting then thinking Deep Red was pretty damn great. Was super disappointed that Four Flies was only available dubbed in English. Argh! I hate when films are dubbed. It’s distracting & definitely ruins the film but, meh – I was in lockdown so I watched it anyway.

It’s certainly nowhere near the level of Deep Red or Suspiria. As usual, there was some imagery I liked (like that doll thing up there – I love a creepy doll thing & Argento clearly does too). Shit, I dunno – I remember almost nothing about this five months later whereas I remember all of Deep Red plus its brilliant score. And, damn, I saw later that this score was done by Ennio Morricone so I wish I’d been paying more attention because I love Morricone. I’ve added the score to my playlist to properly check it out sometime.

At least the story was ALMOST coherent in Four Flies, which I can’t say for all of Argento’s stuff (especially Inferno). It also had a truly silly but fun way in which the killer got discovered so I guess I’ll give it an extra point for that. But if you’re new to Argento just watch Deep Red, which is his most accessible film.

Based on Suspiria de Profundis by Thomas De Quincey

Plot Synopsis: (via Wikipedia)
The plot follows a young man’s investigation into the disappearance of his sister, who had been living in a New York City apartment building that also served as a home for a powerful, centuries-old witch.

Again, I was excited to see a Dario Argento film was going to be showing on TV on Film4. I don’t have a way to record anymore so, as it was the start of lockdown & everything was shit, I was determined to stay up to watch this at its 1:30am showtime. Not worth it!! Damn. 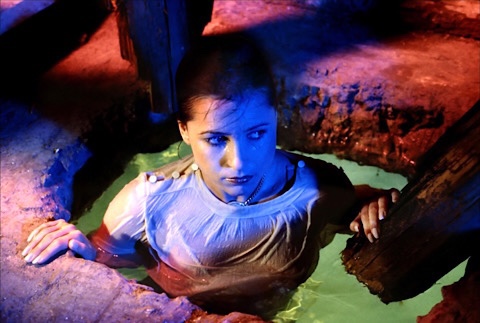 First of all, this was ALSO dubbed. What? Why?? Let’s be honest – only proper film nerds are gonna watch foreign films in the middle of the night and film nerds want subtitles. So, again, this will have hurt my enjoyment of this one. When I mentioned that Four Flies was somewhat coherent (as far as Argento films go)? Inferno was an incoherent mess. I don’t know what the fuck was going on, but of course it didn’t help that I was exhausted & worried about viruses at that point (well, I still am now). 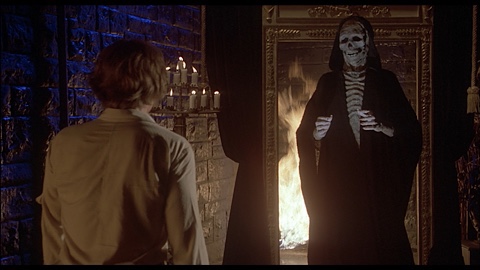 Anyway – I don’t think anyone watches Italian horror for a good story so I guess it doesn’t matter. It’s all about the imagery & bright red blood & supernatural weirdness. Again, there’s some good imagery in this one but not nearly enough to make up for how weak this movie is compared to Suspiria. Here’s a bit about it from Wikipedia: A thematic sequel to Suspiria (1977), the film is the second part of Argento’s Three Mothers trilogy, though it is the first in the trilogy to explore the idea of the Three Mothers. The long-delayed concluding entry, The Mother of Tears, was released in 2007. Yeah, so this is sort of a sequel to Suspiria. Too bad it sucks. But it doesn’t sound as bad as the third film! Released in 2007? I’ll skip that one. Give me good old Seventies/early Eighties horror.

At least this one is worth a try if you like Argento’s style as it’s still almost a 70’s film but with a weird ass early 80’s prog score from Keith Emerson. But at least that gives it a cheese-factor that often works for me personally. I kind of hated yet liked the score – I think I’ll add it to my playlist now & I bet it grows on me along with all the other horror scores I like to have creepily playing in the background while I work from home. Give me a Goblin score instead, though! Goblin are a huge part of the reason for Deep Red & Suspiria being the superior Argento films I’ve seen so far. Watch those. Only watch Inferno if you absolutely love Suspiria and want another witchy Argento fix but go in with very low expectations. And don’t watch it dubbed. I’m just too broke to watch films in the way I prefer.