I’ll try to post my May Roundup on Friday but I’m again ending up with some reviews that are too long for my roundup post. So here’s my full review of Hud. I may post more tomorrow if I end up writing too much for any others.

Based on Horseman, Pass By by Larry McMurtry

Plot Synopsis: (via IMDb)
Honest and hard-working Texas rancher Homer Bannon has a conflict with his unscrupulous, selfish, arrogant and egotistical son Hud, who sank into alcoholism after accidentally killing his brother in a car crash.

I looooove young Paul Newman. He was absolutely gorgeous so, yes, I admit that was 100% the reason why I stuck on this 1963 film about a cattle rancher. He’s fantastic in this, although it broke my heart that he was such a bastard. At first I thought his character was going to be a lovable sexy rogue like Han Solo but, nope – the character of Hud has no redeeming qualities. 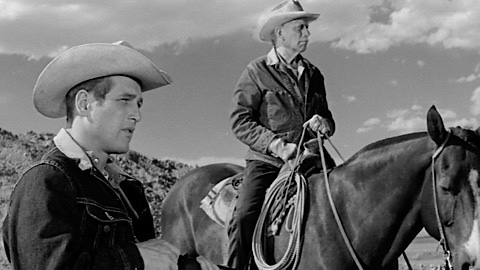 This was a very good character study with excellent performances so was well worth a watch. Newman plays arrogant & cold-hearted Hud, who clashes with his father (played by Melvyn Douglas). Hud disagrees with how his father runs their ranch and they have very different values. Hud’s likeable nephew (Brandon deWilde) lives on the ranch with them and looks up to cool, womanizing Hud. Their housekeeper, played by Patricia Neal, also lives at the ranch and is always ignoring Hud’s advances because she knows what kind of man he is and doesn’t want that trouble in her life.

Neal was brilliant in this! Loved her character. Neal & Douglas won acting Oscars for Hud and they were well deserved. Newman was also nominated and it looks like deWilde wasn’t but they both deserve recognition as well – everyone did such a great job in this film. I had to look up deWilde & Neal as didn’t know them from anything else and I really liked them both in this.

deWilde’s biggest role was possibly as a kid in Shane (I did see that) and he sadly died young at the age of 30 in a car accident. Neal was married to Roald Dahl (I didn’t know that) and it sounds like she had quite a difficult life. I’d definitely watch her in another film based on her excellent performance in Hud. What also really worked in this film were the different ways in which each of these characters interacted with selfish Hud and how the nephew really grows & learns from seeing how Hud behaves. I highly recommend Hud to anyone who likes old dramas with very strong Oscar-worthy performances. Just be prepared for Newman being very unlikeable and going way too far while drunk at one point.

Luckily, Newman was an absolute sweetheart in real life so we can appreciate what a fine actor he was to be able to portray such a jerk in Hud. And we can also appreciate the below picture of him since he was actually a nice guy…