Today’s IMDB Top 250 Guest Review comes from Mike of Screenkicker!. Thanks for joining in on this, Mike! 🙂 Now let’s see what he has to say about V For Vendetta, IMDB rank 164 out of 250…

Ever since Blade was released in 1998 we’ve seen a huge resurgence in the number and quality of comic book movie adaptations.  Despite all the great attempts at bringing the world of comics to life one respected author’s creations seemed destined to be mishandled completely.  Alan Moore is the mastermind behind classic graphic novels like Watchmen and The League of Extraordinary Gentlemen however the transition from page to screen of his work had been mediocre at best.  The film version of League is almost a lesson in how not to adapt the medium and From Hell isn’t much better.  So does V for Vendetta break the curse?  Yes and no.

V tells the story of Evie played by Natalie Portman a young woman living in a near future fascist Britain who through a series of events comes to be associated with a masked anarchist named V whose goal is to overthrow the government.  With V’s help Evie finds the strength to confront almost impossible odds.  Fans of the source material won’t find much to grumble about apart from some changes to the main character.  He’s less of a straight-up terrorist and more of a righteous revolutionary.  One of the best things about Moore’s comic was the vision of the UK he created.  It was written in the 1980s and was massively influenced by Britain governed by Margaret Thatcher, making its near future version of London believable and not too far from our own world.  V director James McTeigue’s adaptation on the other hand portrays a very strange city which never feels real, its recreation of London looks old fashioned and seems more quaint than dystopic.

The movie starts by setting the scene and at first is jarring when we first meet V.  This is one of those common situations where comic book dialogue sounds silly when spoken aloud with V’s introduction eliciting childish sniggers from me the first time I saw it.  He’s seems far from the dangerous, determined force of nature from the book and later when he has emotional scenes it can pull you out of the action.  Basically the first half of the film jerks along at an uneven pace leaving you ambivalent to what’s actually happening. 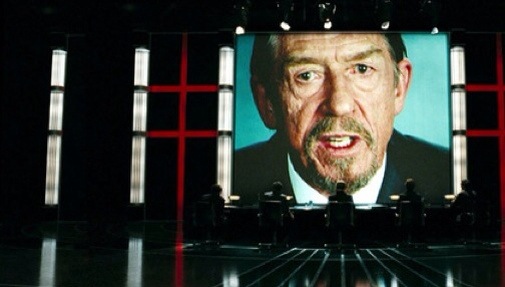 I know what you’re thinking – this armchair critic hated the film.  Well you’re wrong!  There is a lot to like about it and it really is greater than the sum of its parts. There’s a good performance from John Hurt and despite a slightly dodgy English accent, Natalie Portman gives it her all.  And once the plot kicks into gear properly the film finds its feet. Stephen Rea plays a policeman investigating V’s attacks and how his snooping unfolds is expertly told with a brilliant montage towards the end showing all the parts of V’s plans falling into place.  The crowning moment though is the entire section where Evie is captured, imprisoned, and finds a letter from a previous inmate.  Acting, editing, music, and visuals all come together to produce an extremely emotionally affecting and memorable scene which will stay with you and is worth watching the movie for.  From this part to the end of the film it’s worthy of the title and you forget about the slightly dull first half.

Intriguingly V is the first Alan Moore adaptation that he wouldn’t let producers put his name on and it turned out to be the best at least until Watchmen was released.  It’s a good story, well told with good acting, action and a couple of absolutely brilliant sections so it’s definitely worth a watch if you’ve always dreamt of sticking it to the man.  It really is V good.