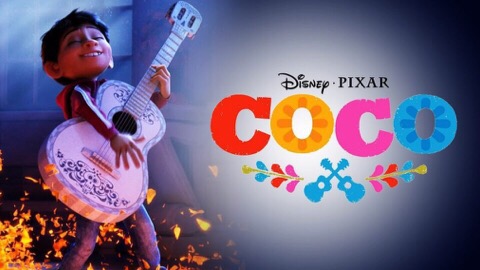 Plot Synopsis: (via Wikipedia)
The story follows a 12-year-old boy named Miguel Rivera who is accidentally transported to the land of the dead, where he seeks the help of his deceased musician great-great-grandfather to return him to his family among the living.

Finally! I hate how we have to wait months for Pixar movies to be released in the UK. What’s up with that?!?! I adore Pixar! So, thanks to months of hype about Coco, maybe that’s why I was slightly underwhelmed. Cute movie & nice story but it certainly won’t be at the top of my list of favorite Pixar films. I did do a list of My Top Pixar Movies HERE. Actually, that list needs updating. Okay, I’ll do it in this post! Here’s my Pixar Movie Rankings (counting down to my very favorite & including Coco):

13th? Hmm. That’s disappointing. I do think Coco was hurt slightly by Book Of Life coming out first. My daughter said afterwards that Coco was okay but that she likes Book Of Life more. That’s unfortunate as I think Coco is definitely the superior film. It’s more timeless and has a better story. I liked the focus on family & following your dreams compared to the more complicated love story in Book Of Life, which I think fewer people can relate to.

I’ll keep this short. Coco is still a far better film than all the animated stuff we get from the Non-Disney/Pixar studios in Hollywood. I just have incredibly high standards when it comes to Pixar and some movies have been a bit disappointing in recent years. But even the worst Pixar films are FAR from “bad” (well, the Cars films leave a lot to be desired).

Coco’s lead character, Miguel, is strong and I really liked Héctor (voiced by Gael García Bernal). We don’t get to know a lot of Miguel’s family as well as I’d have liked, though (Plus they come off as a bit unlikeable at first). I also thought the movie was quite slow to begin with. Pixar movies usually grab me from the start but I didn’t really get into Coco until almost halfway through the film. The “reveal” was also very obvious from early on but, I dunno… I suppose that’s just because I watch too many movies. As always with Pixar, the film was lovely to look at (Even all the use of orange, my least favorite color! It looked great in this). Mostly, I just didn’t fully connect with the story & the characters in the same way that I usually do with Pixar movies. 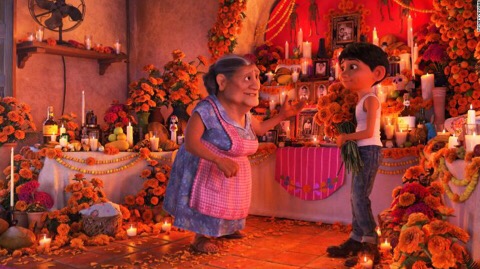 This review is coming across as far more negative than I’m intending. Sorry! Coco is a really good film. I just look at that list of Pixar movies above and most of them are stronger films than this one. And I consider both WALL-E & Inside Out to be damn near masterpieces that transcend the whole “Oh, that’s just an animated kids’ movie” thing. (Which isn’t how I feel about animated films – I just know that some people see them as nothing more than “cartoons”). Coco is no WALL-E or Inside Out or the beautiful beginning of Up but it’s also not some other studio’s piece of shit like Trolls or something. Yay, Pixar! You’re still the best. I’m sure Coco will grow on me after I see it on DVD several times…

**I did a “double feature” of Coco & Three Billboards Outside Ebbing, Missouri (great combo!). I’ll try to review Three Billboards tomorrow or Friday. I really didn’t expect that to be the one that I preferred of the two but I liked it a lot.