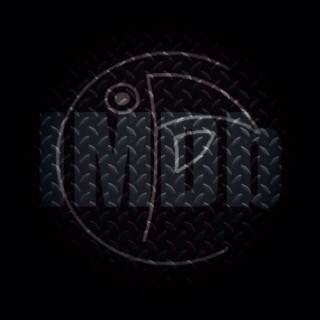 Today’s IMDB Top 250 Guest Review comes from John of Written In Blood. Thanks for the review, John! 🙂 Now let’s see what he has to say about Goodfellas, IMDB rank 15 out of 250…

DISCLAIMER: I have to say that this is the first time “horse cock” has been mentioned in this way on CPD (or, at all). I’m going to get some weird Google search terms now. 😉 Now on to the review of fuckin’ Goodfellas… 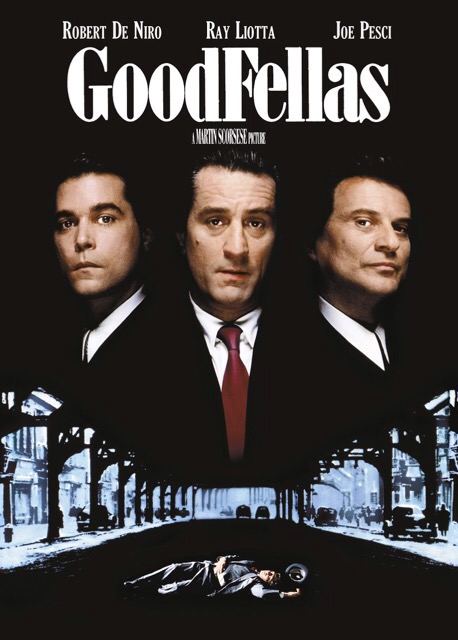 When I first volunteered to write a review of Goodfellas for the IMDb Top 250 challenge I began to wonder if I had bitten off more than I can chew. How do I approach a review of what is arguably the greatest Mob movie ever put to celluloid? Do I summon my inner Ebert and wax poetic in my praise? No. Why? Because it’s fuckin’ Goodfellas, that’s why.

Do I compare the movie to that other great Mob (read also as Mafia) movie, The Godfather? No. Why? Because it’s fuckin’ Goodfellas, that’s why. There’s no Don Corleone stroking a cat and handing out jobs and favors; there’s Paulie (a portly Paul Sorvino) holding court at a backyard cookout with a fat chunk of food in his hands giving the nod to his people as a sign of approval for whatever deal is going down at that particular moment.

There’s no big wedding with Italian songs and Sonny’s horse cock plowing Lucy upstairs in the closet. Granted, there’s a wedding and there are Italians and Sicilians and dancing and food; there’s just no horse cock-or horse’s head, for that matter-anywhere in sight. Why? Because it’s fuckin’ Goodfellas, that’s why. Do you see where I’m going with this?

Comparing Goodfellas to The Godfather is like comparing Elvis to the Beatles; they are the twin sons of different mothers. The Godfather is subtlety and the life of a Mafia family and the rise of its new Don, Michael Corleone.Goodfellas is Henry Hill and his life in the Mob (or as close as he can get to it as he is not “one hundred per cent Sicilian on his mother’s side and his heritage can’t be traced back to the old country”) and there is no guarantee that the particular moment that he is living and breathing will not be his last. If Goodfellas is even remotely about life in a Mafia family then that family is nothing but sharks. Why? Because it’s fuckin’ Goodfellas, that’s why.

With what is quite possibly the greatest opening line in cinematic history (“As far back as I can remember, I always wanted to be a gangster.”) Goodfellas begins to unravel the true story of Henry Hill (Ray Liotta) and his slow rise and hard fall in the life of a wiseguy. His journey is a violent one filled with angry fathers, towels wasted on gut-shot and bloody men, icepicks and bullets to the heads of unfortunate fools getting too close and fucking it all up; there’s Karen (Lorraine Bracco) his Jewish wife who enters into their marriage wide-eyed and innocent and transforms into a woman just as dirty as himself.

Along the way we meet Jimmy Conway (Robert De Niro) who loves to steal but is not above killing to protect his investments. Fuck with Jimmy and his haul and you may just find yourself frozen stiff in the back of a meat truck or right beside your wife in the front seat of your new Cadillac with bullets in both of your heads. Why? Because it’s fuckin’ Goodfellas, that’s why.

Then there is Tommy and let me begin by saying this: It is my opinion that for as long as he has a career in movies that Joe Pesci will never be given a role that is as great and-dare I say it-iconic as that of Tommy DeVito. Perhaps Pesci knew this; perhaps that is why he shines (not a good word to use in his presence, may I remind you) in every scene. If it’s not already then the, “How the fuck am I funny, what the fuck is so funny about me?” scene should be taught in film schools as a mandatory course in great acting and direction. Pesci earns his Best Supporting Actor Oscar in every scene that he is in.

Okay, so I’ve just looked over this and I don’t think that what I have written has been so much of a review as it has been a gushing letter to a movie that I have loved since I first saw it on VHS in 1991 and have watched more times than I can count in the past twenty-plus years. I also notice that I have failed to mention one name and I deserve to be whacked for not doing it sooner. Without Martin Scorsese there would be no Goodfellas. The man who makes the world’s greatest movies has shown his mastery of the Mob movie with films as diverse as Mean Streets and The Departed but it is here that his mastery is at the highest zenith of his career. It burns my balls knowing that Goodfellas lost out to Dances with Wolves for Best Picture and that Scorsese lost out to Kevin Costner as Best Director at the 1990 Academy Awards. To paraphrase a quote from Jay Leno: What the hell were they thinking? 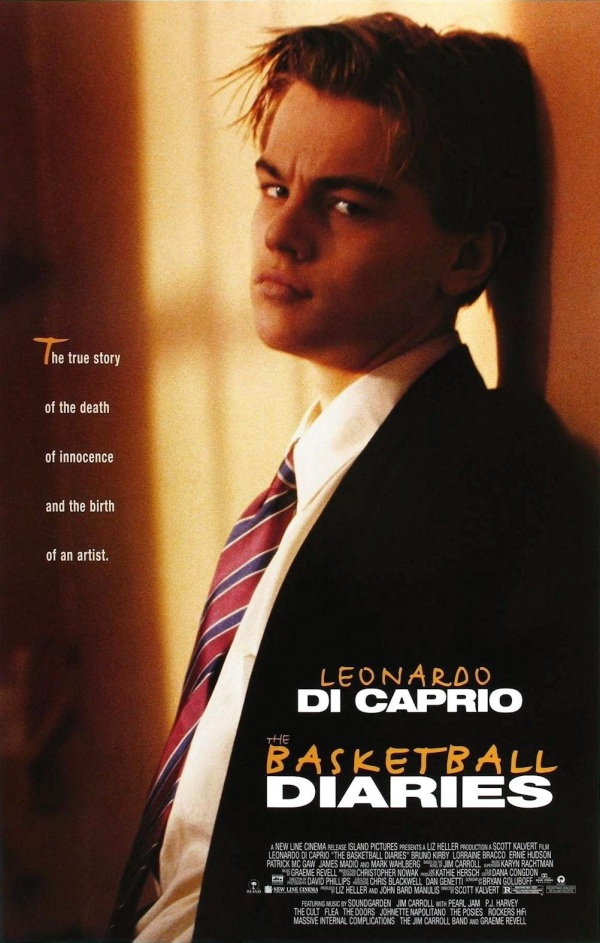 Plot Synopsis: (via Wikipedia)
The Basketball Diaries is a 1995 American drama film directed by Scott Kalvert, starring Leonardo DiCaprio, Lorraine Bracco, James Madio, and Mark Wahlberg. It is based on the autobiographical book of the same name by Jim Carroll. The film centres around Jim Carroll (DiCaprio), a promising teenage basketball player who develops an addiction to heroin with his misguided friends. 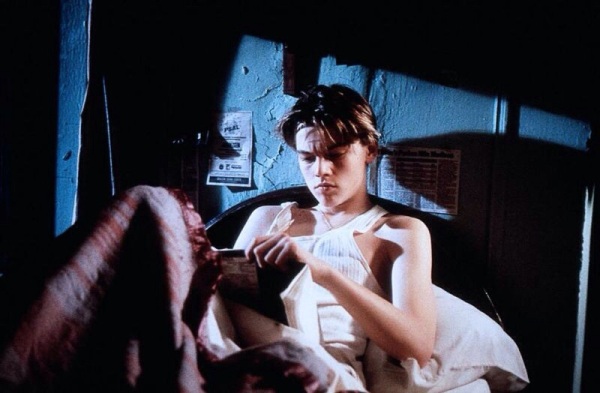 I’d always heard that Leonardo DiCaprio was amazing in this film & have been meaning to watch it for years. Unfortunately, I found this movie pretty disappointing. Leo is good but I really wasn’t missing much by waiting so long to see this. 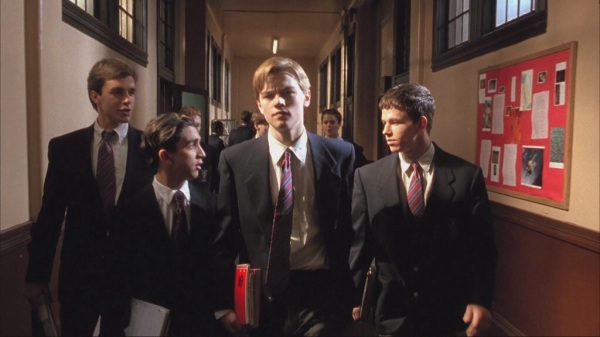 First of all – hey, I didn’t know Leonardo DiCaprio & Mark Wahlberg had been in a film together before The Departed! Their acting has definitely improved since The Basketball Diaries (especially Wahlberg’s). They’re both fine in this but it still felt a little bit like young actors playing at being drug addicts. However, at least they were close to the ages they were playing and were believable as high schoolers (I assume they were in their 20s but it’s not like they were 40 playing 17 like in Grease). And I’ve sort of forgotten how “pretty” Leo once was now that he’s aged & really proven himself as an actor. Man he looks young in this! I know it took him years to shake off the pretty boy thing, which wasn’t really fair as he’s an excellent actor. Is he as good in this as people say? I’d say he’s definitely showing major promise here. It’s a shame the movie itself probably lets him down a bit. 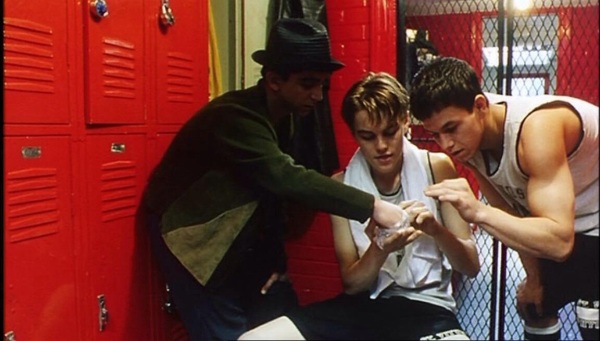 As for the movie… I’m not sure what it is that I found disappointing. I think, for one thing, it hasn’t aged well. It’s a 1995 movie but actually feels older. I don’t know if maybe it didn’t have a massive budget? And as I’ve said, for some reason I didn’t really buy into these pretty young actors as drug addicts. I also felt like the movie was trying too hard to be “cool” and stylish but it didn’t really work. I watched this last week & can only really remember two scenes well (a good one and one that’s notorious). After the death of a friend (minor spoiler but not really), the friends play basketball in the rain. That was a really good scene. But I’d completely forgotten why this film later became so controversial until I got to the school shooting scene. Yikes! WAY too similar to things that would happen four years later. And then again. And again. And again. And again…. But I digress! 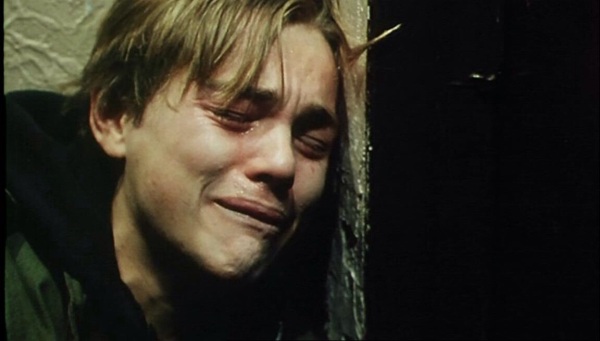 The Basketball Diaries has had pretty good word of mouth over the years but I think, in some cases, people are remembering a movie they liked when younger but haven’t watched since. I can definitely see people my sort of age having a soft spot for it if they saw it at the time but it hasn’t aged well. Leo’s performance is very good, though, and the main reason to bother seeing this now if you haven’t already (I’d definitely recommend it to DiCaprio fans). But I just didn’t find the actors believable as drug addicts (which I don’t think was the fault of the actors themselves). The movie makes its biggest mistake in, I think, not making any of the characters very sympathetic. If the characters are unlikeable, you’re not going to care about them and the drug addiction that’s destroying their lives. I don’t know… It’s not a bad film & is worth a watch just to see Leo but it could have done a better job telling the story. 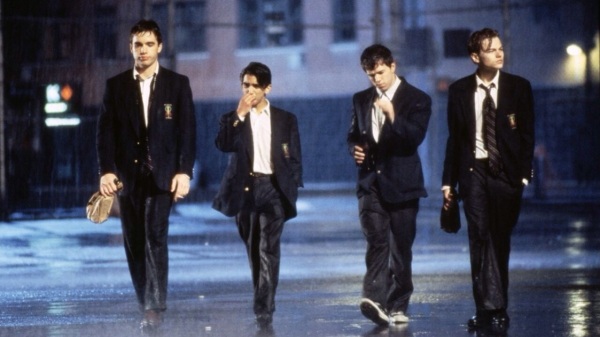