Plot Synopsis: (via IMDB)
A boy growing up in Dublin during the 1980s escapes his strained family life by starting a band to impress the mysterious girl he likes.

I really enjoyed this movie! It’s nice to watch a feel-good, fun movie like this one. It was also nice to get a break from superheroes… I could’ve gone to X-Men: Apocalypse but just didn’t have the energy. I’m very glad that I saw Sing Street instead. I’d rank it very high on my list HERE of the 2016 movies I’ve seen. 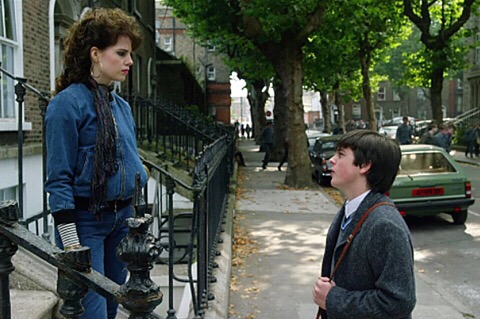 I’ve not seen any other John Carney films. I’ve not seen Begin Again mainly because I really don’t like Keira Knightley plus Adam Levine is in it, right?? Ugh. If I see that stupid video where Maroon 5 are playing at various weddings ONE more time, I’m gonna puke! And I do want to see Once but I’ve been putting it off for years because it looks so indie & soooo singer-songwritery. I really need to be in the mood for that sort of thing before I watch it as it has the potential to annoy me. I already know, however, that Sing Street is the one for me.

Teenagers in 1985! With loads of my favorite 80’s music! Joe Jackson! Duran Duran! Hall & Oates! The Cure!!! This is MY era! I’m very happy that this movie had a mixture of well known 80’s songs as well as new songs written by the band in the film as I was afraid it would all be music that I didn’t know. But, hell – the songs by the band in the movie were really good anyway! Maybe a little too good to be fully believable from a group of 15-year-old boys… But who cares? This is one of those movies I enjoyed so much that I can ignore a few small imperfections. Yeah, the story is basic and a bit cliché & predictable. That really doesn’t bother me as long as a film is good, which this one is. I don’t want to pick it apart. I hate when people overanalyze a movie that’s just meant to be fun. I had a lot of fun watching Sing Street – there were more laughs than I was expecting, I cared about the characters & what would happen to them, there was just the right amount of drama without it being melodramatic, and the music was great. What more can we ask for from a movie?? 🙂 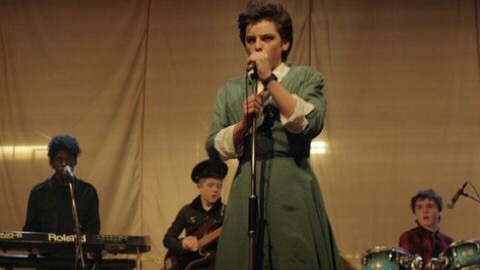 This movie is full of unknowns as far as I’m aware (I’ve not looked them all up). Well, except for the dad being played by Littlefinger. That was weird – seeing Game Of Thrones actors in other things is always a little distracting. Everyone did a good job & I really liked not knowing them all already. Our main character (the band’s singer) & the girl he falls for are adorable – I would imagine we’ll be seeing them in many more films after this one. The movie gets a decent balance between the different aspects of the boy’s life (his relationships with his family, the girl, the band, and other students & teachers in his new school). However, my favorite relationship was probably that with his older brother, played by Jack Reynor. Loved him! He’s the best thing about the movie. I’ve never seen him in anything before but apparently he was one of the possibilities for playing Han Solo? I hope to see him in more after this – he was a real highlight in this film.

There’s not much more that I can say about Sing Street. I clearly thoroughly enjoyed it but I know that it’s very much my type of thing. I always like movies about bands but especially love them when they involve teenagers in the 1980s since I’ll always be able to relate to that (even when the movie is set in Dublin instead of small town America). It reminded me a lot of We Are The Best!, a Swedish movie from a few years ago about three girls in 1982 Stockholm who decide to form a punk band. Sing Street has the same sort of spirit as that film and I loved them both & can totally relate to the characters in both films despite them being set in different countries from the one where I grew up. What can I say? The language of music is universal. I highly recommend Sing Street to music lovers and to Eighties lovers.

**Don’t watch this clip if you like knowing nothing about a movie beforehand but there aren’t any spoilers in it or anything. This is the first song that the band in the movie writes (The Riddle Of The Model) & this clip shows them making a “video” for it. If you’re curious, it’ll give you a good idea of the vibe of the film. And it’s a catchy tune! 🙂