I’m taking part in the Luso World Cinema Blogathon hosted by Crítica Retrô and Spellbound By Movies. You can read all about the blogathon HERE & HERE. Thanks for letting me participate! I look forward to reading all the entries. 🙂

My entry is a review of the 2002 Portuguese language film City Of God, which was nominated for four Oscars and is currently ranked 22nd in the IMDb Top 250. I originally watched & reviewed this as part of my IMDb Top 250 Project and as a Resolutions 2014 film as I’d been meaning to make the time to watch it. I admit that my knowledge is very limited when it comes to Lusophone (Portuguese-speaking countries) films. So I’m very interested in reading the other entries as I do try to explore all types of cinema. But, yeah – I had to use the Keanu Reeves banner. Who doesn’t love Keanu!!

Here’s my uneducated review of City Of God. I’m sure I don’t do it justice but it is a really good film.

Based on City of God by Paulo Lins

Plot Synopsis: (via Wikipedia)
City of God (Portuguese: Cidade de Deus) is a 2002 Brazilian crime drama film adapted by Bráulio Mantovani from the 1997 novel of the same name written by Paulo Lins, but the plot is loosely based on real events. It depicts the growth of organized crime in the Cidade de Deus suburb of Rio de Janeiro, between the end of the 1960s and the beginning of the 1980s, with the closure of the film depicting the war between the drug dealer Li’l Zé and criminal Knockout Ned. The tagline is “If you run, the beast catches; if you stay, the beast eats”, (a proverb analogous to the English “Damned if you do, damned if you don’t”).

I’d been curious about this movie for a long time as it’s SO high in the IMDB Top 250 films of all-time (it’s currently number 22). I’ve been working my way through the 250 since starting my blog as I have a challenge to try to watch them all and this was the second highest ranking film I’d not yet seen.

It’s good, yes. I liked it. Does it deserve to be above things like Once Upon A Time In The West & It’s A Wonderful Life? I’m not sure about that. It’s definitely a fascinating look at a lifestyle that I (luckily) can’t really relate to as someone from a very small town in the American Midwest. I know this is “loosely based on real events” but haven’t looked into it enough to know what is fact and what isn’t. Either way, it’s awful knowing that people have had to live this way and terrifying to see the ease with which some of the characters in this engage in violent activity and don’t think twice about taking someone’s life. 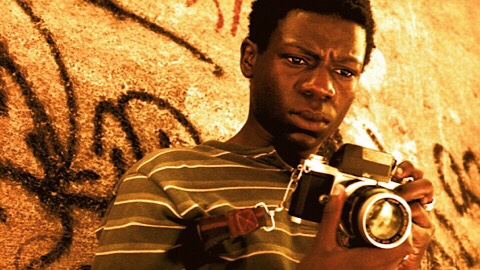 I will say that I can partly see why this film is so popular, even though it’s not really my kind of thing. There are some great characters in this. The lead & narrator, Rocket (above), is the one truly “good guy” in a film filled with people who seem to have no conscience and you really do want the best for him. His friend Benny is very cool – he’s the guy everyone likes and he helps to keep the peace a bit between the two main rival gangs who are controlling the area. I love that this takes place during the late 60s into the early 80s & Benny adopts a groovy 70’s look. Then there’s Knockout Ned, a great character I’d love to have seen be a bit further developed (although he’s more well-developed than most of the characters in this) and the truly amoral Li’l Zé, who is the most powerful criminal in the area.

What’s amazing is I read that only one person in this was a professional experienced actor and the majority were people from “favelas” (shanty towns) and some from the actual City Of God who were chosen and then trained in acting as the director wanted the film to feel authentic. I’ll say that it definitely worked and the “actors” in this did an excellent job. I felt bad after giving Slumdog Millionaire a horrible review & then finding out some of those in it were from real-life slums (turns out it was the kids, who were the only good thing about that film anyway). Fortunately, City Of God is a much better film than Slumdog Millionaire and feels very real whereas Millionaire felt like it was trying too hard and just felt phoney to me (sorry, fans!).

I’ve just scratched the surface on the characters as there are LOTS of them in this film but those are some of the main ones & the most memorable. But as there are so many, we unfortunately don’t get as much character development as I’d like to have had. Why do they do the things that they do? I suppose it’s because they don’t have much other choice. But then why does Rocket manage to remain a “good guy”? We’re given a reason for Knockout Ned making the choices he makes but not really for why Li’l Zé is so evil. But, as I’ve said, it really isn’t a lifestyle I have any sort of experience with so I can’t comment on it too much. This is sort of the Boyz N The Hood of Rio de Janeiro. I think that’s a great film as well but, again, I couldn’t fully relate to it. But both films are certainly worth a watch to gain at least a small understanding of what it’s like for those who have no choice but to live a life surrounded by poverty and/or violence and to be grateful for the lives so many of us are fortunate to have outside of that.

Was City Of God a worthy watch? Yes – I’m glad I finally watched it. It won’t become an all-time favorite of mine like some of the IMDB Top 250 films I’ve watched in the last few years already have but I’d recommend it to anyone who thinks that it sounds like their sort of film. The performances are very good & the movie isn’t preachy – it just shows us the poor & violent lives led by those living in & around the City Of God from the late 60s to the early 80s.