Based on Dune by Frank Herbert

Plot Synopsis: (via Wikipedia)
Set in the far future, it follows Paul Atreides as his family, the noble House Atreides, is thrust into a war for the dangerous desert planet Arrakis.

I finally read the first Dune book last year during lockdown in preparation for this movie (pathetic review HERE). Then, obviously, the movie was massively delayed. So, being old & forgetful, I’ve forgotten half the book by now. And, of course, the movie only covers half of the book (if that), so I have no chance of remembering the rest of the book by the time the next movie comes out. Hey, that’s okay – everything can be a surprise when I see it! I’ll say this, though – Holy shit, I was saying NONE of the names, etc, right in my head while reading the book. Half the movie I was like “Ah, so that’s how that word is said”.

Seriously, though, I really did like the book. I’d had no intention of reading the rest as I’ve heard they aren’t as good as the first one but I kind of want to know the whole story now instead of waiting years for the movies. There are some storylines & characters I’m far more interested in than others but I really like the overall story & the world Herbert created. 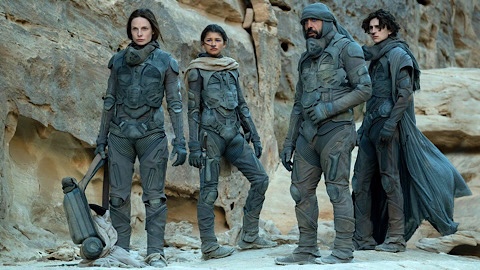 There are, as with many stories like these, far too many characters to keep straight or fully care about but there are a few I liked enough to keep me interested. For me, I like Paul of course but it’s mainly Lady Jessica. LOVE her! People moan about lack of good female characters but this book is from 1965 & Lady Jessica is awesome & the star of the story for me. Was disappointed that things involving her were left out of the movie, such as the secret garden, which I felt were quite important to the story. But I admit that I love the whole Bene Gesserit thing (Boy, was I saying Bene Gesserit wrong!) & wanted to see all of that onscreen. I realize that they could never possibly cover everything in these books but quite a lot was still left out so I’m very glad I read it!

I was also very worried as Rebecca Ferguson seemed to barely be in the trailers, etc, but she’s just as important as Timothée Chalamet’s character. Although they sadly left out some things involving her, I was happy that she does get plenty of screen time. Phew. And I’ve had a girl crush on Ferguson especially since Doctor Sleep so was very happy when she was cast as Lady Jessica as she seemed perfect. She’s fantastic. Easily my favorite thing about the movie as well as the book, so I still have a girl crush. She’s so lovely. Here’s a closeup of these two. They’re so damn pretty. Well, I don’t fully get why young girls like Chalamet but whatever. He has amazing hair, though:

Um. Let’s see. I’ve talked enough about Lady Jessica and that was the main thing I cared about. Am very happy with all of that but was happy with most everything to do with this adaptation. Yes, I’m sad that plenty was left out but that was to be expected. Yes, some of the characters weren’t how I imagined them but I thought they all did well including Jason Momoa who I was most worried about as Duncan Idaho & thought he’d throw me out of the story but he didn’t. Was sad to get so little of Josh Brolin’s Gurney Halleck, who is a great character. Was also disappointed that they didn’t get into the whole Mentat thing at all as that was quite interesting in the book but also confusing & I really wanted a refresher on what the Mentat are. Wow, I don’t remember the character of Glossu Rabban, played by Dave Bautista, at all. Pretty sure he’s important! I clearly pay less attention when they aren’t focusing on my favorite characters plus I wasn’t really feeling Bautista in the movie & he did throw me out of the movie a bit for some reason. But I thought all the rest of the casting was good enough. 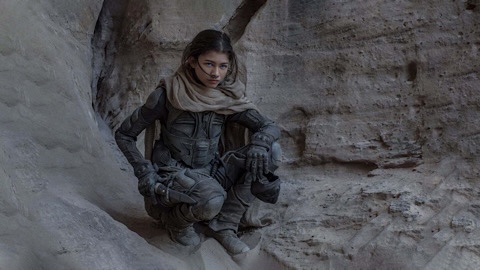 Oh! Damn. Not even mentioned Zendaya. If you’ve seen the movie, you’ll know she’s not in it much. She has a very important role but, as I expected, she wasn’t going to be in this much as she shows up later in the book. I think some people were very disappointed as they pushed her so much in the marketing (which was stupid but, you know, they always push “youth” & beauty). To be fair, they used her more than they needed to for the first half of the book & much more than I was expecting. She’s good – I think she’ll be very good in the role based on what we’ve seen so far. SO looking forward to seeing the next movie now & seeing more of her Chani with Chalamet’s Paul. And seeing more Lady Jessica & that freaky Bene Gesserit stuff!

I thought this would be a short review! While writing this, more of the book has come back to me and I’ve decided I really do like what I’ve seen of Villeneuve’s adaptation so far and it has renewed my interest in the story & wanting to continue reading it now. Especially as so many things were left out of the movie… Now I’m wondering how much I’ve missed by not reading Game Of Thrones!

As for Villeneuve, I’m definitely a fan. I’ve liked all I’ve seen of his work and Arrival is probably my overall favorite film of the past decade (and it’s still my favorite of his). So I was very eagerly awaiting this Dune adaptation & he again didn’t disappoint. The world looked fantastic, though a little too dark. Why do serious movies have to be so dark & grey these days??? I know it’s a sandy, dreary planet but still – I get enough grey living in England. But it did still look lovely & the cast was (mostly) great and it made me like the story even more.

My only other small complaint is that the Hans Zimmer score was very disappointing. As in, it was bland and I hardly noticed it except for when it suddenly sounded like some Scottish Braveheart thing WTF? Disappointing as I adored Jóhann Jóhannsson’s (RIP 😦 ) work on Villeneuve’s other films (and especially on the non-Villeneuve Mandy) but sadly he couldn’t work with him again. I know it seems like a small thing but an amazing score can make a good film a great film for me. I still think this adaptation of Dune was pretty great & I’m happy with the results but, man, a perfect score really would’ve pushed this one even higher for me. Maybe the score will grow on me. Bring on the next movie! I can’t wait.

FYI – Yes, I did see the David Lynch Dune but I can barely remember the book a year & a half later so let’s just say I remember nothing from a movie I watched a good 25 years ago. Might rewatch now, though! Will keep my expectations low. Wish the Jodorowsky Dune had happened… 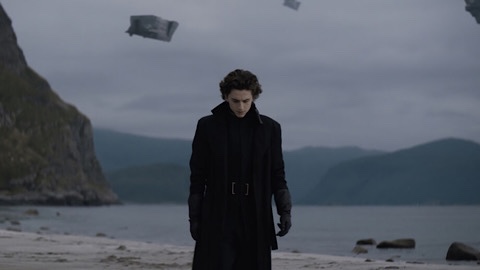