Happy Halloween, everyone! This movie was an unplanned watch over the weekend. So, there will be two horror reviews from me today: this one and later on one of my Blind Spot choices I’d already planned to be the end to my October Horror Month. As for Trick ‘r Treat, I’d not even heard of it until fairly recently. I didn’t necessarily expect much from it as the majority of modern horrors suck. Well, Hell – this was a pleasant surprise! Let’s talk about it…

Plot Synopsis: (via Wikipedia)
Trick ‘r Treat centers on four Halloween-related horror stories. One common element that ties the stories together is the presence of Sam, a mysterious child trick-or-treater wearing shabby orange pajamas with a burlap sack over his head, that makes an appearance in all the stories whenever someone breaks Halloween traditions.

This movie somehow completely passed me by when it came out. I saw a couple of bloggers give it positive reviews last year so I’ve since been curious about it but still didn’t rush to try see it. Thank you to the hubby for seeing the DVD cheap the other night and picking it up for me as a Halloween treat! 🙂 I hadn’t planned on actually watching any horror movies for Halloween this year but I’m glad I did because I really enjoyed this one. It has the best “Halloween spirit” of anything I’ve seen in a very long time.

I do love horror anthologies. I’ve always been a fan of this format, though it may not be everyone’s cup of tea. Yes, this film could be accused of being somewhat derivative as it’s very much like watching Tales From The Crypt meets Creepshow meets Goosebumps. It even throws in the comic book panel thing. Well, I’m not going to complain as all work is derivative anyway. As long as something good & enjoyable comes from it, I don’t really mind.

I thought this film was quite clever in the way it connected these four stories (actually five stories, including the opening to the film). Sam the adorable/creepy trick-or-treater with the sack on his head makes an appearance in each story as do the various characters within each of the other stories. It all takes place during Halloween festivities in a small Ohio town.

What I love about anthologies is that you get a variety of stories and everyone will have a different favorite. I’m still not sure which is my favorite from Trick ‘r Treat. Possibly the school bus massacre? Or maybe the Sam segment… I don’t know! The cool thing is that I liked all of them. And I’m super picky, especially with this genre.

I’ll say something quick about each segment (using the names for each as listed at Wikipedia – I don’t know if they have specific titles):

This is a short story that opens the film and for some reason doesn’t seem to get counted as I keep reading that there are “four stories”. Like the rest, though, it’s interwoven throughout the film as we see these characters again (a Halloween-hating woman & her Halloween-loving boyfriend). It’s a decent opening and a throwback to Eighties slashers.

This is one of the two segments that I’d label “horror comedy”, yet I haven’t seen this movie called a horror comedy anywhere. Actually, the entire film has fun comedic elements so I’m not sure why it’s labelled strictly as horror/thriller.

When I got this DVD, I immediately looked up the film’s director & writer (because I’m a weirdo nerd) and discovered it’s from the guy who did Christmas horror comedy Krampus (Michael Dougherty). Krampus wasn’t perfect but I did really enjoy it and you can very much tell that these films are from the same person (especially the Meet Sam segment below, which had a very similar feel to Krampus). Dougherty hasn’t done a lot of directing – he’s mostly been a writer for things like X-Men 2, Superman Returns, X-Men: Apocalypse… Screw that superhero stuff – he needs to make more stuff like Trick ‘r Treat & Krampus! This is what he seems to be best at. Where’s the Trick ‘r Treat sequel supposedly in development? I now want a sequel.

Oops – I went off on a tangent. The Principal! This was a funny segment & you gotta love Dylan Baker as the “school principal with a dark secret”. He was perfect for this role – that dude is so weird. Anyone here ever watch The Good Wife besides me? Probably not but he’s so similar here to his great unhinged character from that show. Not my favorite segment but it’s good & probably the most “Creepshow“-like.

I really liked this story, although I’ve seen it compared to R.L. Stine’s Goosebumps stories. I can see why there’s the comparison as, overall but especially with this story, this movie was far more tame than I was expecting. Don’t get me wrong, though – this is not a kids’ film so don’t gather the family around for this one on Halloween! 😉 There’s still plenty of blood & violence but it has a great cheesy 80’s vibe as opposed to the sick torture porn shit of today (I can’t stomach those). This story, starring kids telling the tale of the legend of a “school bus massacre” in the town’s past, is minimal on gore but probably the one that’s most in the spirit of Halloween & the scary tales we liked to hear as kids. Fun stuff! 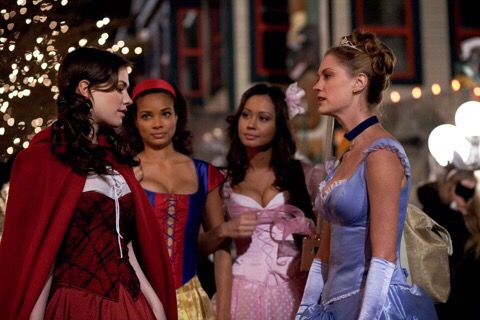 If I had to pick a favorite segment, I’d probably go with this one in which we finally meet that adorably creepy sack-head trick-or-treater we see throughout all the stories. “Sam” is a great design – it had to be difficult to make something so cute yet scary as f*^k at the same time. This bit is silly in a wonderfully retro-Eighties way and I would assume this is either people’s favorite or least favorite of the five. If you just go with it & have fun in the way I believe the director/writer intended, you should really enjoy the Meet Sam segment. If you liked Krampus, you’ll like this. And vice versa.

Conclusion (the movie’s & mine):

After our five stories, the movie neatly wraps things up for each of them and gives a satisfying conclusion as far as horror films go. Again, I liked how cleverly interwoven the stories were and would only have one small complaint about something that felt forced & didn’t quite add up (involving the other story the school principal is a part of – it made no sense how he came to be there…). That’s a minor thing, though – I really enjoyed this film overall and think it’s a fantastic one to watch each Halloween.

But I admit that this movie is going to be more to my taste than to a younger generation because of its obvious Eighties influences. I looked up the director’s age afterwards to see if he was the same sort of age as me since it felt like he must have grown up on the same kind of horrors that I did (he is so he clearly did). Younger audiences may not appreciate the tongue-in-cheek humor and may mistake this film for “cheesy” as opposed to an homage to the fun horrors I grew up on and which weren’t meant to be taken so damn seriously. Yeah, I enjoyed Trick ‘r Treat quite a bit and am even giving it the highest rating of everything I’ve reviewed this month. Good old-fashioned horror fun. Bring on the sequel! 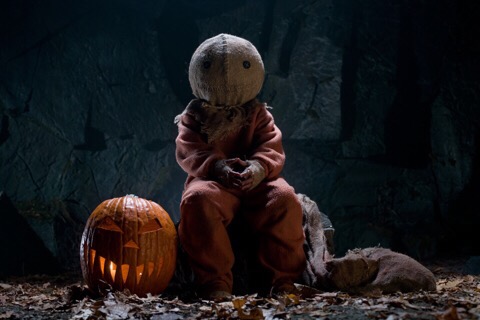