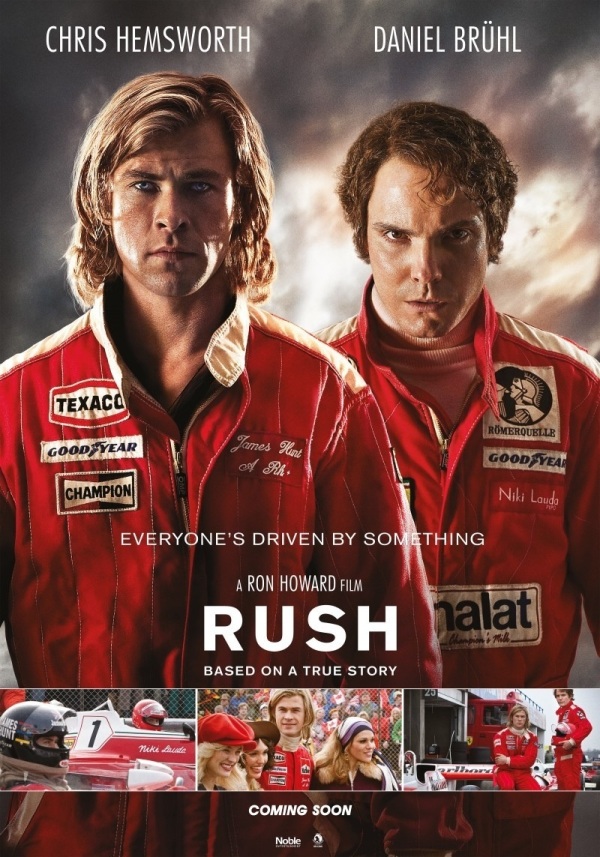 Plot Synopsis (via Wikipedia – I think everyone knows this):

Rush is a biographical action film directed by Ron Howard and written by Peter Morgan about the 1976 Formula One season and the rivalry between drivers James Hunt and Niki Lauda. 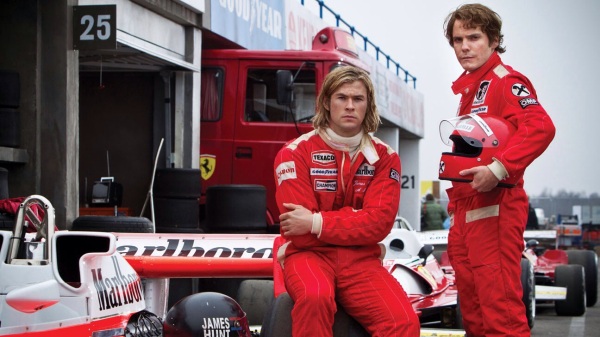 Before I Start The Review:

I’ll start by saying I hate sports. All sports. Racing? Don’t care. James Hunt & Niki Lauda? I’d never even heard of them before this film and knew nothing of this famous rivalry. So do you think I actually liked this film? Oh my god – I absolutely loved it. 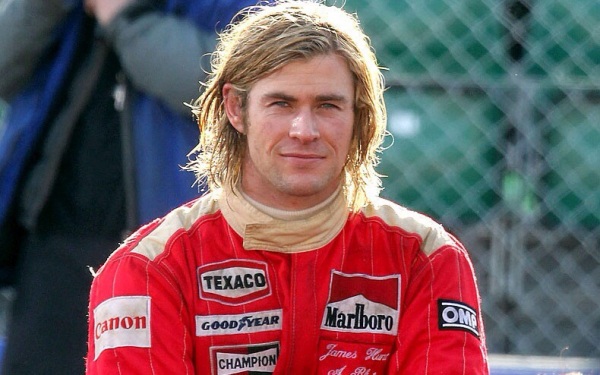 And now I have to say this – 2013 has been a disappointing year for movies. We’ve either had movies that were lots of fun but had terrible scripts & cliche characters (Pacific Rim) or we’ve had inferior superhero films (Iron Man 3) with over the top action sucking the soul out of something that had the opportunity to be a fresh new start (Man Of Steel). We’ve had a magic film (Now You See Me) already done way better in past films (like The Prestige) and a sci-fi film (Oblivion) already done way better in past films (like the myriad of sci-fi classics Oblivion wanted to be). And never mind all the sequels, remakes, and usual lack of any original ideas from Hollywood. And then there was Oz The Great And Powerful – don’t get me started on that… 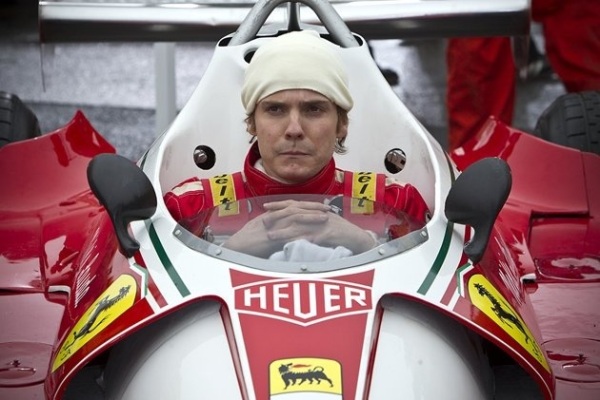 So that leaves us with “based on a true story” films. Usually a safe bet but quite often lacking in “fun”. Being a movie lover, I hate feeling like I’ve been really negative about films lately (like I was in all the reviews listed above). So it’s with great pleasure that I can FINALLY say this: Rush was the most rewarding cinema-going experience I’ve had in a very long time and you’re now going to read absolutely nothing negative. 🙂 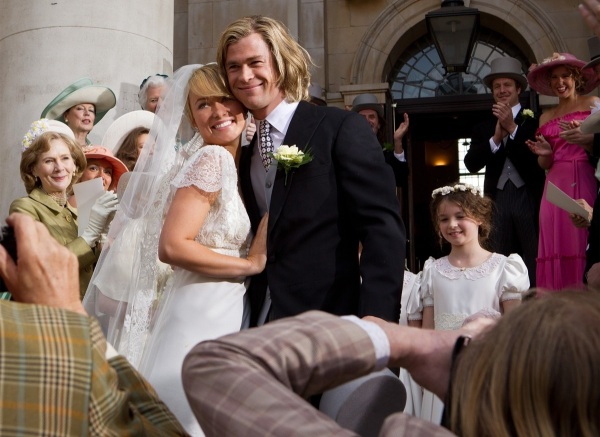 My Opinion On Rush:

Obviously I can’t speak of the true story (although I’m certainly interested in knowing more now!) so I’ll only be discussing Rush as a film.

This story, although in many ways quite a simple story about a sports rivalry, is absolutely fascinating. No wonder they based a film on it and how on earth had I never heard a thing about it? (That “I hate all sports” thing, I guess). Clearly by my excitement you can see you don’t need to be a racing fan to enjoy this film – you just need to be human and have at least a little bit of a heart (mine is pretty tiny). If you ARE a racing fan, though, you still won’t be the slightest bit disappointed. Howard gets the perfect balance, I think, between emotional human drama & edge-of-your-seat racing action. In a way I wonder if it was slightly more exciting for someone like me who had no clue how any of the races would end. I’m actually very glad I didn’t read up on any of the true story before the film as it probably made watching it much more intense. 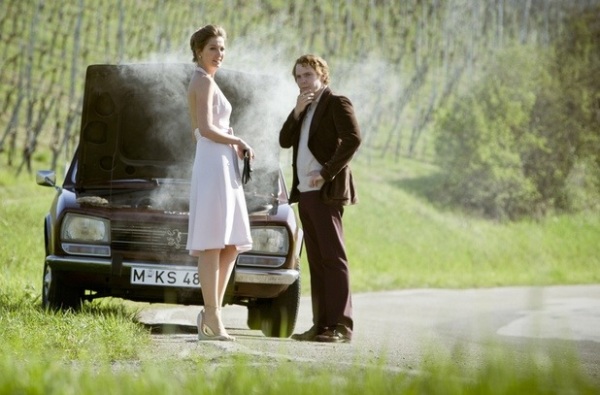 As for James Hunt and Niki Lauda, at least how they’re portrayed here, what a couple of great characters! As this took place in the 70s and (thankfully) way before the days of Twitter & celebrities airing all their dirty laundry in public and getting on our nerves, I don’t know how much of this rivalry was played out in public & how much was just written about? I don’t know just how intense it got in real life but it was a hell of a lot of fun to watch in this film. I loved how they were so different yet SO similar, especially in their arrogance. I like how this movie made them human and made us truly care about them despite some very big character flaws in both of them. I think one of the biggest things I’ve always hated about sports is the arrogance that you get from some of the sportsmen (and women? Don’t want to sound sexist!). That this movie had me loving two guys like this by the end of the film was quite a feat. Honestly – you have no idea how “unlike me” it is to like guys like these & to enjoy anything related to sports. 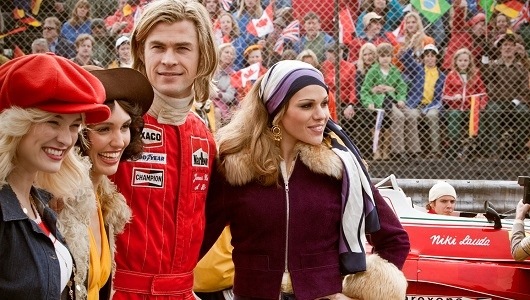 Chris Hemsworth as James Hunt: Cocky, sexy, ladies man, bad boy all the girls want and all the men want to be, lives life to the fullest and doesn’t care about consequences. He was brilliant. Perfect. I couldn’t take my eyes off him and for once it was based on his performance alone.

Daniel Brühl as Niki Lauda: Cold, arrogant, intense, has no friends, personal lifestyle the exact opposite of ladies man Hunt. Also brilliant. Perfect. Possibly even MORE brilliant and perfect. And by the end I guarantee you’ll love him. And you’ll love Hunt. Even though they’re still the same people they are at the start. 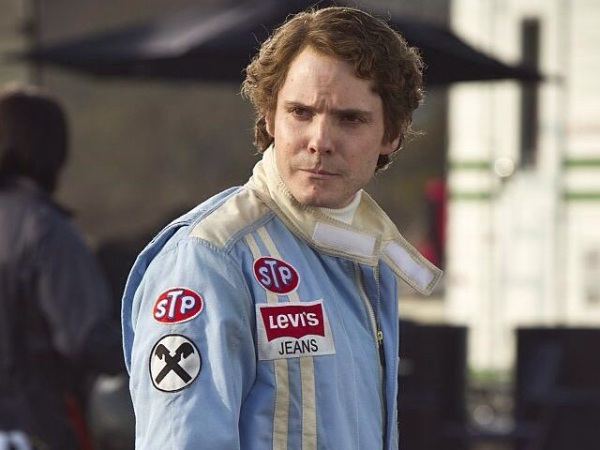 Heart-pounding human drama that captures all the excitement and fear that are a part of racing & the risk of death those drivers face every time they get into those cars for another race. And what surely must be one of the most fascinating and intense rivalries in the history of sport between two men so different yet so alike that they can’t stand each other? THIS is the stuff of great movies. I fell in love with these men by the end of this film and now want to know more and, hell, may even start watching racing. I can’t emphasize this enough: making ME like these men and admit to MAYBE now watching a sport? Honestly, you don’t know me so you have no idea what that means. This film is THAT good. And I’m going to steal my hubby’s line after the film: “But which one of these guys was truly LIVING life?”. The film seems to ask this & everyone will have a different opinion on that just as the two main characters in the film clearly do. But should a sports movie really be making us question things so deeply? Bravo, Ron Howard! Your movie moved this hater of sports. 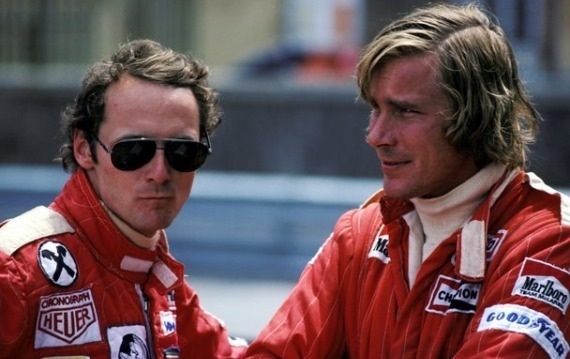 And, yes – My list of 2013 Movies Seen has a new first place. As you might suspect. I’d use a racing term here if I knew any.

(Where are you Tim The Film Guy? For once you can’t say my rating is too low…) 🙂