Based on Goosebumps by R. L. Stine

Plot Synopsis: (via IMDB)
A teenager teams up with the daughter of young adult horror author R. L. Stine after the writer’s imaginary demons are set free on the town of Madison, Delaware. 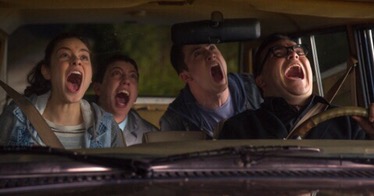 This was my seven-year-old’s first proper live action “scary movie”. I’m happy to report that she loved it. I was too old for R.L. Stine’s Goosebumps series when he started it but know I would’ve absolutely loved those books if they’d been around when I was younger. I grew up watching (the original) The Twilight Zone & The Alfred Hitchcock Hour from a very early age (probably 7 or 8) and have loved strange, scary, and/or supernatural & sci-fi stories ever since. As a pre-teen I got into Christopher Pike books (nice & weird – I loved those) and remember reading some pre-Goosebumps R.L. Stine (Twisted, The Babysitter, Blind Date – I had fun looking these up just now & remembering the covers!). 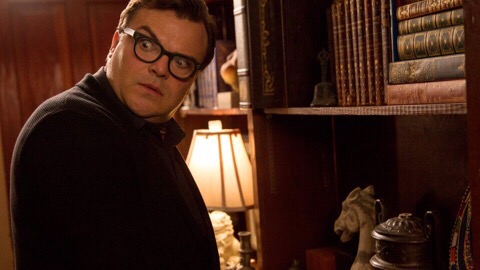 Anyway, I’m not going to force it but I’m hoping that this movie gets my daughter into liking these kind of stories a bit more now. Then she can be as weird as her mother! 😉 I’d love to read the Goosebumps books with her at some point. For those who’ve read them, what sort of ages would you recommend them for? I always thought they were aimed slightly older than this movie, which felt quite “young”. The movie stayed the right side of the line for my daughter – she was a little scared by some bits but I didn’t feel anything was too scary or at all inappropriate. If your kid doesn’t scare easily, I think this is fine for ages 7 & up. Goosebumps is a really fun family movie and, believe me, when you have young kids you appreciate when you start getting to watch some movies with them that you yourself can get some enjoyment from as well!

I of course won’t have had as much fun with this movie as those who read the Goosebumps series, though. I imagine this film was a real treat for his fans. The story’s setup is fantastic, which sees various R.L. Stine monsters brought to life when they’re accidentally released from the manuscripts he keeps locked in order to keep his out-of-control creations imprisoned. Jack Black plays R.L. Stine, which was fine by me as I’m a Jack Black fan & my daughter already liked him thanks to School Of Rock. The film’s concept was very bold & I think it works really well. Imagine this same story with Stephen King. That would be interesting! Can you imagine someone letting Pennywise loose?! (Although, that’s kind of happening in the US & UK at the moment with those asshole clowns running around). Look! Gnomes! I adore garden gnomes. I never thought of them as murderous before this movie…

The werewolf was also pretty cool…

But, of course, the main “monster” unleashed from R.L. Stine’s books is Slappy, this evil-looking ventriloquist’s dummy… 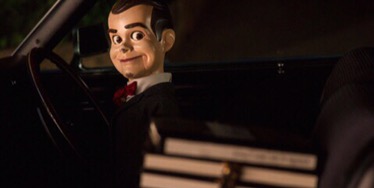 Yep. Dummies are evil! I’ve always known that. There are other creatures that are set loose but these were my favorites & Slappy is definitely the best (and most evil) of them all. He’s not overly terrifying, though – he’s “kid-friendly scary”. If that makes any sense. He won’t be in my nightmares but my daughter might now have a lifelong (healthy) distrust of creepy dummies. Oh, there’s also an abandoned amusement park in this movie (complete with working electricity somehow). I loved the amusement park scenes – what a perfect setting for a kids’ film.

There’s not much more I can really say about Goosebumps other than that it’s great when they actually make decent family films like this one. However, I know you’re unlikely to watch this unless you have children between 7 & 13ish or if you grew up reading the Goosebumps books. Dylan Minnette is fine as the lead teenage boy & I have to say I far prefer this film to the wildly overrated Don’t Breathe (so very NOT a family movie, FYI! Just comparing as he starred in both plus I just reviewed that one recently). I enjoyed Jack Black as always but I thought the biggest stars of this film were Slappy & Stine’s daughter (played by Odeya Rush). She’s a strong female character, which is always important to me as the parent of a girl. I loved a final twist to this movie, which I saw coming from the very start since I’ve lived & breathed these types of stories for 30+ years but know my daughter will have thought “Wow!” to the twist. That’s what I want to see! Her loving a strong story & great twist ending in the same way I did when watching all those Twilight Zone episodes as a kid. I can see Goosebumps being a favorite movie for a lot of kids & thinks it’s one that my daughter will forever be fond of.

Based on The Giver by Lois Lowry

Plot Synopsis:
Jonas is an 11 (soon to be 12) year old boy in a future where there is no war, suffering or pain. He and his family unit follow strict rules within their community including things such as the precision of language and the sharing of feelings and dreams. Everyone is assigned a role in life at the Ceremony of Twelve and no one is more surprised than Jonas when, at his ceremony, he’s selected as the next Receiver of Memory. During his training, he starts to discover that his community may not be as perfect as it seems.

I’ve just read & reviewed this book HERE (and was lazy & used my same plot synopsis). As always, THE BOOK IS BETTER! I mean, sometimes the film adaptations are okay. However, I was really disappointed with this one so, seriously – please read the book if you have any interest in this story! It’s a quick read. They changed A LOT of details for the movie & made a fairly simple story too over complicated.

As yet another teenage dystopian film, The Giver is okay. It will probably seem boring to teens, though, as it’s not exactly as exciting or action packed as The Hunger Games. I knew they’d do this but it still pissed me off – they added loads of action that wasn’t in the book and gave small characters WAY bigger and more important roles (Meryl Streep’s character has a small part at the start of the book then you never hear from her again plus the two friends aren’t all that significant). It annoyed me as it’s so obvious they’re trying to compete with Divergent, etc, but the book is a lot more subtle and I think the story works much better without all the movie’s added drama (and romance that every teen film seems to require). 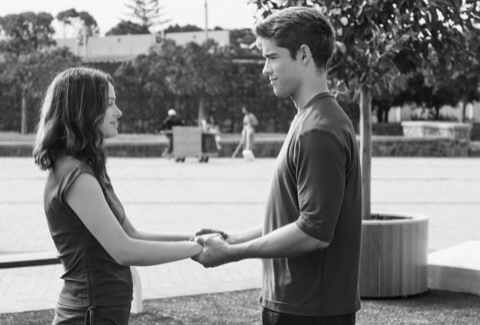 Let’s see – I did like the Pleasantville black & white thing with added bits of color as the story went on. Don’t think that’s a spoiler as it’s obvious from the trailers (yes, it’s that way in the book too). I was looking forward to that aspect (I did love that in Pleasantville) but I didn’t think the movie handled it quite right all the time. The boy isn’t at all what I pictured & they changed an important thing about his looks as described in the book. Jeff Bridges is okay but more “gruff” and bitter than I’d expected. I hated Katie Holmes’ character and hated how they turned it into a story more about Jonas & his two friends whereas in the book the focus is much more on his family unit & the child they’re taking care of (Gabriel). Dammit! This is impossible. I clearly can’t discuss this movie without constantly comparing it to the book. I give up. JUST READ THE BOOK! 🙂

The Giver has a simple yet powerful story that I felt got lost in all the extra scenes they somehow felt necessary to add into the movie to keep teenage audiences interested. Give teenagers a LITTLE credit & don’t just assume they can’t think for themselves. The movie takes the one main theme & shoves it down the viewers’ throats whereas the book presents things in a way that gives the reader the ability to make up their own mind about things. I feel that the movie leaves no room for discussion afterwards and the ending of the movie is a big disappointment compared to the excellent ending in the book. I really have no idea what to rate this movie as, if I’d NOT read the book, I think I’d have quite enjoyed it. However, knowing that the story is told in a much better way in the book does annoy me. Hmm. The movie is decent enough, I guess. Just do me a favor & read the book first? Please??

Sorry – this was a rubbish post! I was actually planning on taking a short break from blogging & leaving My Top Ten Carpets & Rugs In Movies as my last post for a while. Go read that HERE instead – that was fun to put together! I’ll start up the reviews again through October with as many horror movies & scary films as I can manage. 🙂