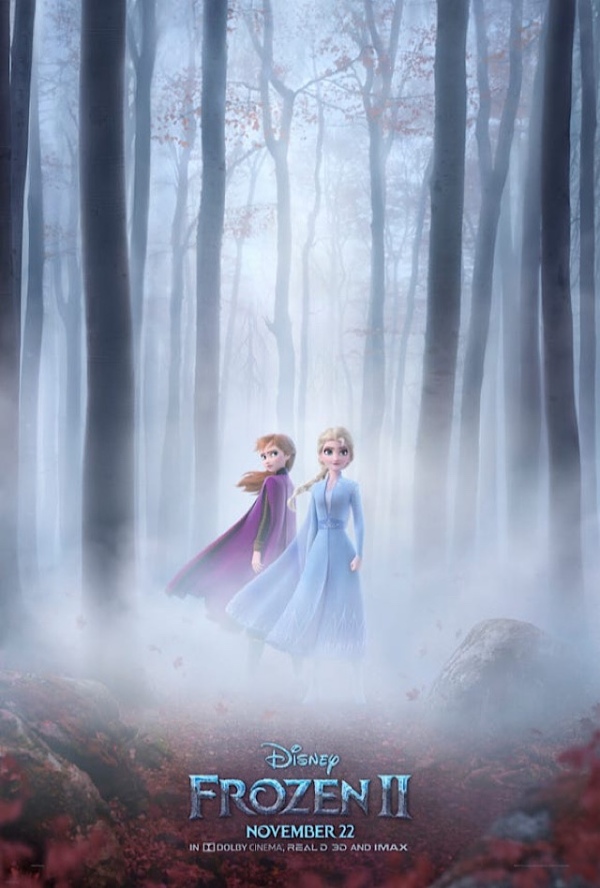 Plot Synopsis: (via IMDb)
Anna, Elsa, Kristoff, Olaf and Sven leave Arendelle to travel to an ancient, autumn-bound forest of an enchanted land. They set out to find the origin of Elsa’s powers in order to save their kingdom. 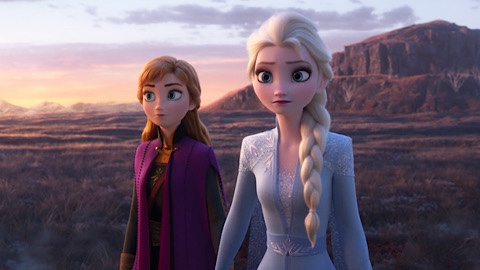 Frozen 2 is fine. Did we really need a sequel? No. Has it really added anything of value to the “Frozen universe”? No. Are the songs good? No. Is the story good? It’s not horrible but it’s not great. It’s just a bit too complicated and messy for what’s meant to be a kids’ film. The story should be kept more straightforward & fairly simple for a Disney movie to become a timeless classic. 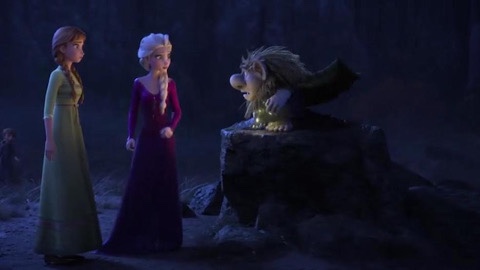 The first Frozen got all the elements right to make it a film that will be seen as one of Disney’s classics years from now despite there seeming to be a slight backlash against it currently. I want Disney movies to have that timeless feel and the first Frozen had that magic. Frozen 2 doesn’t, but that can be said of most Disney sequels anyway. As far as Disney sequels go, it’s still better than plenty of them. So, yes, I still enjoyed this sequel as I’m a fan of these characters but the movie is unfortunately very average and a tad boring. 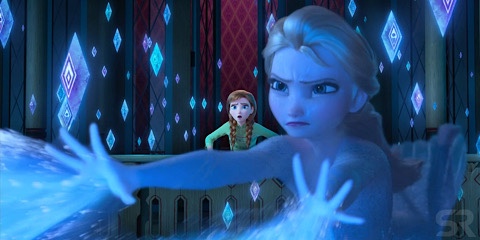 So, I already mentioned the story as the first negative. It’s not a bad story but it’s just… Meh. I didn’t care about the outcome as it was clearly unimportant – they just needed an excuse to make a profitable sequel. The bigger disappointment was the songs. I have to admit that I can’t now remember how even one song goes, unlike when leaving the cinema after the original film. At least two or three of the songs were instantly memorable in the first Frozen. Sorry, but Disney movies should really have at least one memorable song. The songs are a huge selling point for these films. 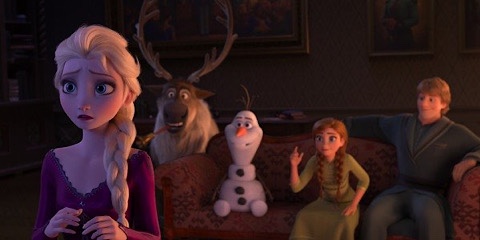 But I don’t want to sound entirely negative so I’ll end this very short review with some good things. These characters are still great. I’ll always like Anna & Elsa and it was nice to see them much closer in this one and being a family doing normal things like playing games together. The sequel still very much focuses on the sisterly love thing, which was what helped make the first one so special. And the outfits are once again my absolute Disney Princess movie favorites. I love that they both have their own unique style but especially love Anna’s outfits each time (I’m a huge fan of green and anything even slightly Scandinavian). So good job on that, Disney – these two have style. 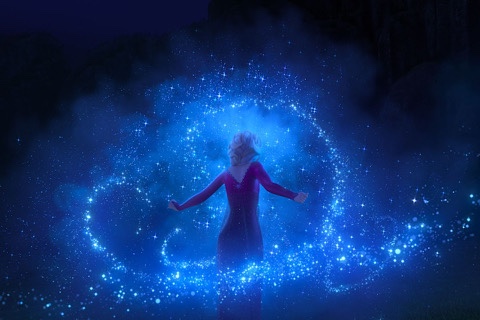 This movie is also pretty damn beautiful. I still prefer the imagery & feel of the first film with its icy look and shades of blue & white but there was some gorgeous animation in this one too. And Olaf, although always borderline annoying, did make me smile a couple of times and he has a very funny bit that I won’t spoil. I’d say that only Kristoff & Sven felt a little wasted in this one but, to be fair, these movies are about Anna & Elsa so “the guys” are in it as much as they need to be. And, yes, there IS a scene after the credits that I’d say is worth staying for. 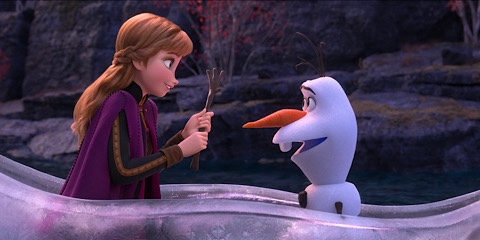 Frozen 2 was fine. It wasn’t needed but I liked seeing these characters again and I don’t think it damaged the Frozen legacy in any way, even if it didn’t exactly add anything special or new to it either. 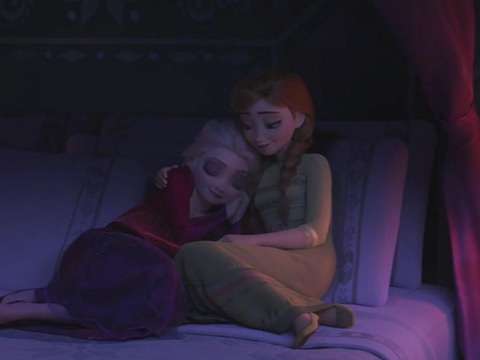 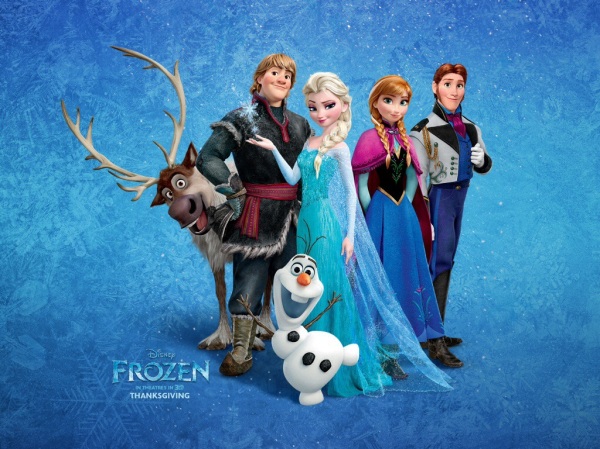 Based on The Snow Queen by Hans Christian Andersen

Plot Synopsis:
After Elsa accidentally leaves her kingdom of Arendelle in an eternal winter due to her uncontrollable secret powers that create ice & snow, her sister Anna must find where she has gone into hiding to see if they can find a way to save their kingdom. 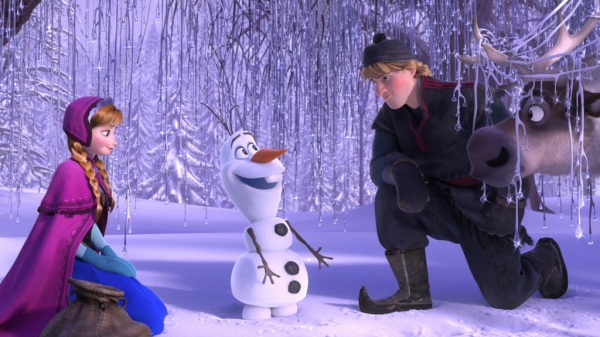 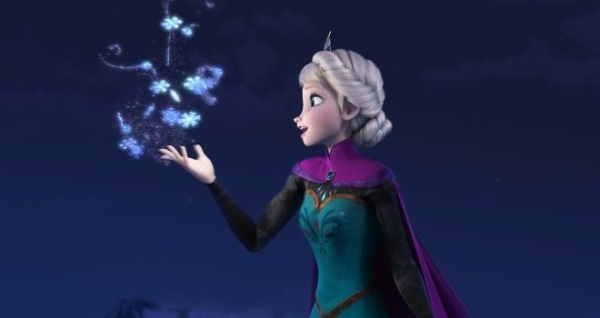 Where do I start? Well, I’m going to try to stay spoiler free so I’ll just talk about some of the things I liked about Frozen. First of all, it’s a great opening. I didn’t want to get my hopes up too high so early in the film but the introduction of the sisters, Anna & Elsa, is fantastic! It’s like all the best classic Disney openings/introductions to the main characters. Sweet, tragic, magical & musical – all that usual good Disney stuff! And the song Anna sings is lovely & really touching. There are some great songs in this. But I’ll come back to the music later… 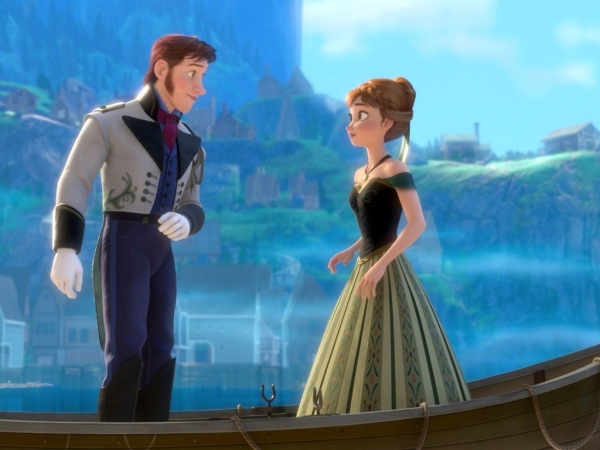 Before we’re introduced to the sisters, however, we actually first meet one of the main male characters (Kristoff) while a bunch of manly men sing a manly song. I know Disney took this same sort of angle with Tangled – they didn’t want it seen as another “Disney Princess” movie so they gave the guy a bigger role and gave it the non-girly name of Tangled instead of Rapunzel. I think this works much better in Frozen, though. The sisters are very much the stars here but there’s PLENTY for boys to like in this one as well whereas I still saw Tangled as just another Princess movie. You can easily take an entire family of all ages to Frozen. Girls will like the sisters, boys will like Kristoff & his reindeer, and ALL kids (and adults!) will LOVE Olaf. Honestly – The adults in the cinema were laughing at Olaf even louder than the kids were. He’s hilarious. I love Olaf! I already loved him before even seeing Frozen as his big musical number (In Summer) was available on YouTube. Check it out if you’re unsure about if you want to see Frozen or not & you may be convinced to go. 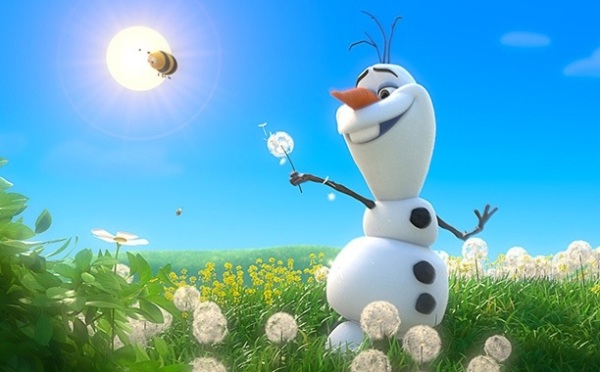 Going back to the music, Frozen has some instant classics. The songs were written by husband & wife Robert Lopez and Kristen Anderson-Lopez. I don’t make it to nearly as many musicals as I’d like to but the only one I’ve WANTED to see in a long time is The Book Of Mormon while one of the only ones I HAVE seen is Avenue Q, which I loved. I was surprised to find out that the guy who wrote the songs for these two musicals had done the songs for Frozen. So, yeah – I guess the guy responsible for “The Internet Is For Porn” wrote the great songs in Frozen. Makes sense – there’s a funny sense of humor in the lyrics of songs such as Olaf’s In Summer & another song called Fixer Upper but the main “numbers” such as For The First Time In Forever and Let It Go are surely Oscar contenders & will long be remembered with other Disney classics. 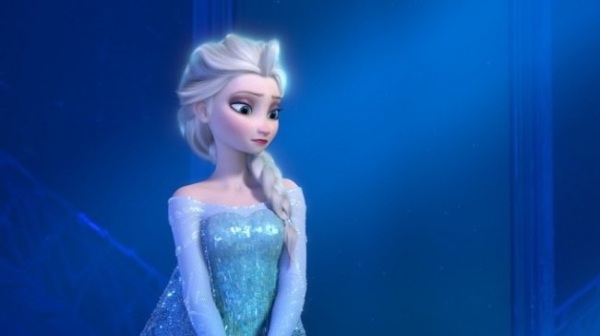 What else? The story – I loved it. I don’t know the original Hans Christian Andersen story but, hey – this is a Disney adaptation so I’m sure it bears little resemblance to the source material. I really wasn’t quite sure how they’d end it which was nice as kids’ films are always so predictable (and I thought it was a very satisfying ending). The look of the film was beautiful – the colors used & all that frozen snow & ice… I can see this being a film that families watch every winter. And it may sound stupid and girly but Anna & Elsa had the greatest dresses! Anna is often in greens while Elsa is in blue and it was great that it wasn’t all girly pink & purple colors going on in this. And… as I’m mostly of Norwegian heritage, I’ve always loved anything with a Scandinavian look. I mean, a guy in the film even mentioned lutefisk. And look at Anna’s main outfit and her cool boots: 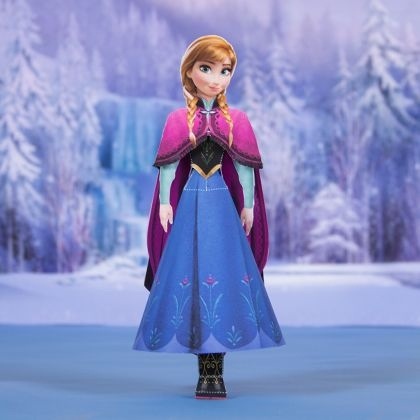 Finally, the most important thing in a Disney movie is the characters. They can have a great story and great songs but if they don’t get the characters right, they might as well not bother. Frozen is already nearly perfect in every other way and, luckily, the characters are just as perfect. 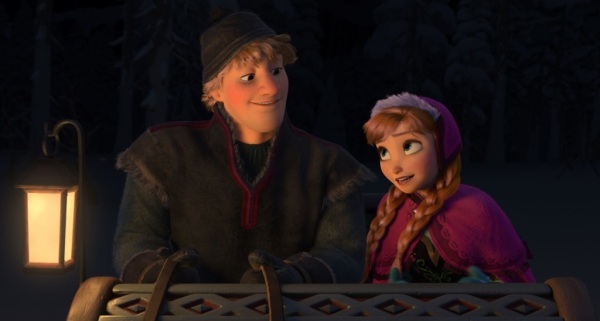 Kristoff is a loveable oaf and his relationship with his best friend, reindeer Sven, is funny. It was also fun watching Sven constantly trying to eat Olaf’s carrot nose. Speaking of the hilariously entertaining Olaf, you already know how I feel about him but I loved the sisters most of all and their story & their relationship felt quite unique compared to the what we’ve seen in other Disney films. I liked their very different personalities & I can see Anna ending up pretty high on my list of my Top Disney Princesses (if/when she’s officially added). Anna is sweet & little dorky with such a childlike charm that you can’t help but like her.

After a good couple decades of some very disappointing Disney films (other than The Lion King & Beauty And The Beast & everything made by the brilliant Pixar which Disney can now claim as its own), we’ve finally been given an instant classic that will stand the test of time just like those from Disney’s good old days. Magical & beautiful, a great story, classic songs, strong female characters, lots of genuinely funny humor & hilarious characters – Frozen gets everything so incredibly right. Thank you, Disney! You’re back! 🙂 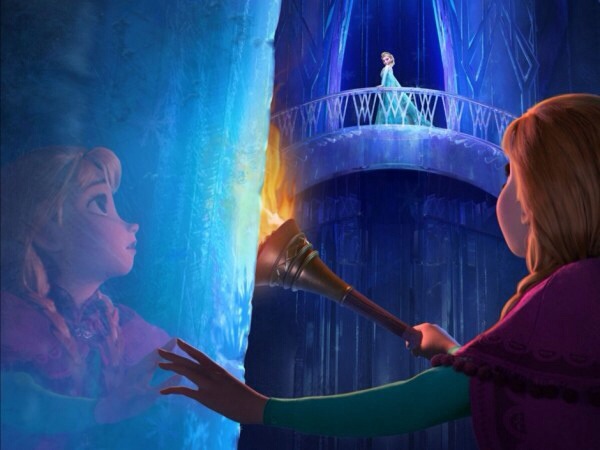