I did a bunch of “my favorite horror movies” lists in October & one was My Top Ten Pre-1970 Horror Movies. I’d commented that it was shameful I’d seen so few to be able to make that list and had seen none of the classic “monster” movies such as Dracula, etc. So I was very happy when the Horror Channel in the U.K. showed a bunch of them over Halloween weekend. Thanks to the family for letting me watch half of them, too! I haven’t updated that list with these yet as I’m not sure where to place them at this point but figured that I should at least try to write a little something about these classics even though it’s after Halloween… 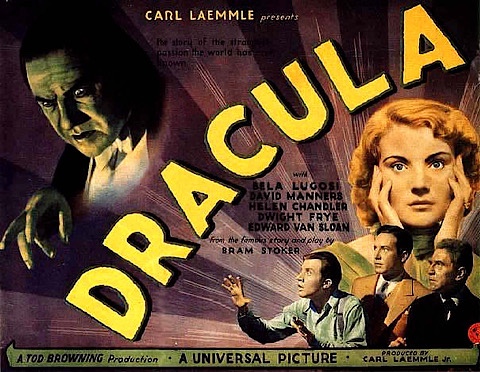 Plot Synopsis: (via Wikipedia)
The film stars Bela Lugosi as Count Dracula, a vampire who emigrates from Transylvania to England and preys upon the blood of living victims, including a young man’s fiancée. 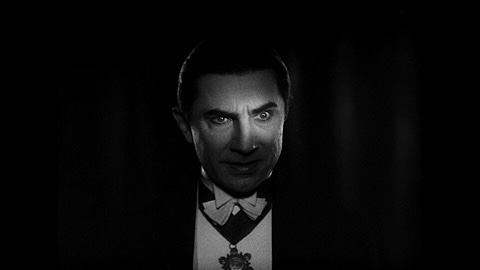 I don’t know where to start with these “reviews” as I’ve not watched enough classic horror to be able to easily discuss them. I’ll say that Dracula was easily my favorite of those I watched Halloween weekend. Bela Lugosi was great as Count Dracula. Loved his look and the mood of the start of the film in his creepy old castle in the fog & full of cobwebs. The whole thing just said traditional “Halloween” to me, so that was great. A proper vampire movie! Also, I noticed it was directed by Tod Browning who did the movie Freaks, which I absolutely adore & think is a fantastic film that was ahead of its time. So I was eager to see another Browning film.

Vampires aren’t usually my favorite when it comes to the typical “Halloween” monsters. As far as these type of movies go, it seems to be the zombie ones I like the most (thanks, George Romero!). So I wasn’t necessarily expecting this to be my favorite (I thought it would be Frankenstein). But Lugosi was so good & I loved seeing all the “vampire rules” played out, which I admittedly know best thanks to The Lost Boys. No “death by stereo” in Dracula, though! Ha! 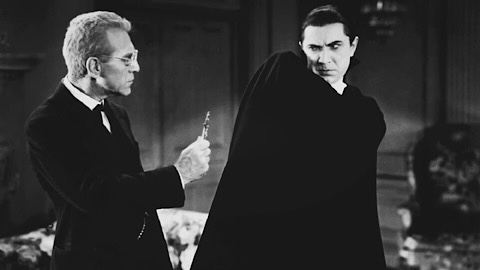 Am so glad I finally watched this. I want to see all the Hammer Horror now too to compare, especially Dracula! Am guessing that just has more heaving bosoms. They loved heaving bosoms in old English movies. So between this Dracula, Nosferatu & my beloved The Lost Boys, maybe I do love vampires after all. It’s made me want to revisit Francis Ford Coppola’s Bram Stoker’s Dracula now as well. Or… maybe even read the book! Maybe. I did read Frankenstein recently. We’ll see! 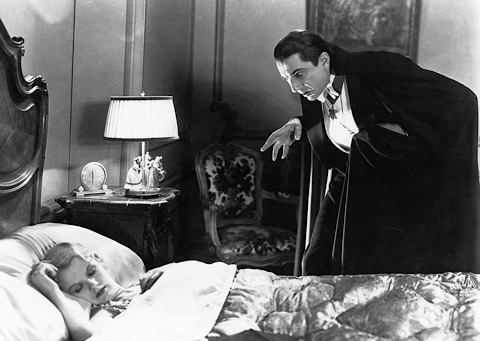 Plot Synopsis: (via IMDb)
Dr. Frankenstein dares to tamper with life and death by creating a human monster out of lifeless body parts.

Unlike the rest, I do think I at least saw bits of this as a kid. I definitely remember the part with the girl. I forced myself to read this book during lockdown as I must admit I don’t read enough classics. Yes, I stick with Stephen King. I’m old, busy & tired. I’ll watch a serious film as it takes up less of my time but don’t have the energy to read War And Peace or some shit. Give me light entertainment for reading! I admit reading Frankenstein, with its 1818 language, was hard going. But I love the overall story. It’s damn good.

So I was expecting to like this movie the most but I think I ended up a bit disappointed as I didn’t realize how different it was from the book! I have no clue how close Dracula was to Stoker’s novel so that’s probably why I was able to just enjoy that movie as it is. Looks like Frankenstein was also partly based on a play adaptation? I was just kind of sad as I didn’t feel this movie captured the creature’s complex feelings & turned him into more of a monster while the flawed Victor Frankenstein character is hardly explored at all. But, hey – it’s a 1931 film. It’s still a horror classic & gave us the iconic “Frankenstein’s monster” look we now all associate with the character (which is also unlike described in the book). And I’ve now seen Boris Karloff in action as well as Bela Lugosi! It’s about time, I suppose. 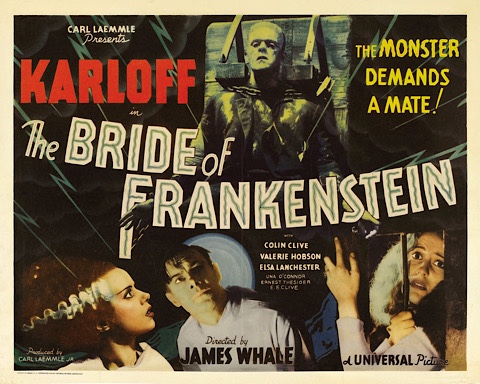 Based on Premise suggested by Frankenstein by Mary Wollstonecraft Shelley

Plot Synopsis: (via IMDb)
Mary Shelley reveals the main characters of her novel survived: Dr. Frankenstein, goaded by an even madder scientist, builds his monster a mate. 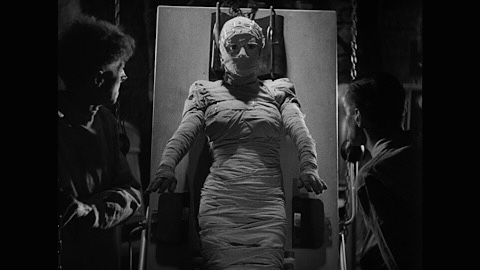 This was a bit of an odd one to me but I really liked that, combined with the first movie, we get a little more of the story from the book. Well, a little. We get a bit with the blind guy and I really liked that part of this movie. My favorite part of the book was when “the creature” hid in a family’s cottage for a very long time & sort of became fond of them & learned from them and the blind man in the movie was I guess a nod to that.

I liked that Elsa Lanchester plays Mary Shelley, starting to tell more of her Frankenstein story, as well as The Bride in the title of the film. Didn’t know that, as I knew nothing whatsoever about this film beforehand. Again, it was great seeing The Bride & her also now truly iconic horror look. Love that crazy hairdo!

I also liked a super weird part of this movie in which a mad scientist guy has some tiny people in jars. In looking it up, I found they’re called “homunculi“. Fascinating! Here’s what it says at that Wikipedia link: “A homunculus is a representation of a small human being. Popularized in sixteenth-century alchemy and nineteenth-century fiction, it has historically referred to the creation of a miniature, fully formed human.” So that seemed silly at first but now I kind of love that bit. Fun film and, overall, I like the two of these movies together as one.

Plot Synopsis: (via IMDb)
Larry Talbot returns to his father’s castle in Wales and meets a beautiful woman. One fateful night, Talbot escorts her to a local carnival where they meet a mysterious gypsy fortune teller.

Enjoyed this one as well, although I don’t really know what to say about this or The Invisible Man as I knew the least about these stories (but of course know the werewolf legend). Well, I know about werewolves thanks to An American Werewolf In London & the beginning of Michael Jackson’s Thriller, of course! Oh, and Teen Wolf. I’m so ’80s! Hey – did you know a guy in Teen Wolf flashes his penis at the end of that movie?

So, anyway – Yeah, I like werewolves almost as much as vampires when it comes to classic Halloween monsters so of course enjoyed this very straightforward werewolf story. Hairy guys are just a little less sexy than those bloodsuckers, I guess. Lon Chaney Jr. stars as the Wolf Man in this (I knew that thanks to Warren Zevon). So I’ve seen another classic monster movie & actor. Feel like I have a tiny bit more movie blog cred now! Wow – this was a pathetic review. Oh! I like the Silver Bullet movie too. God I’m so ’80s…

Based on The Invisible Man by H. G. Wells

Plot Synopsis: (via IMDb)
A scientist finds a way of becoming invisible, but in doing so, he becomes murderously insane.

I know the least about this story and, no, I’ve not read the H. G. Wells book. In all honesty, I think the 2020 movie was my first real introduction to this character (which I assume is very different from the book!). So I’d feel like an ass saying too much about this movie.

I enjoyed it but liked it a bit less than the more “classic monster” movies I watched Halloween weekend. I loved the special effects, though. I thought they were damn good for 1933! I know jack shit about filmmaking but, with all the stupid CGI these days that rarely moves me, I was more impressed by whatever probably super simple tricks they used in this movie to make this guy’s head, etc, invisible in some scenes. Brilliant! Way cooler than computer magic.

FYI – the star of this one is Claude Rains and, once again, I’m happy to finally see these actors in these iconic roles. And, hey – the old lady from Titanic, Gloria Stuart, is in this. Her heart will go on! God I suck at reviewing old movies. This was good, though. All of these were. I’m glad I finally saw them. Thanks, Horror Channel!