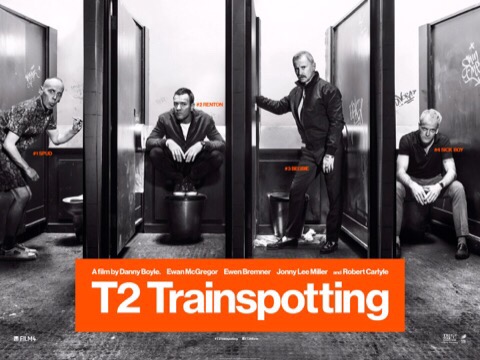 I enjoyed this sequel more than I thought I would and it was better than I expected. It’s interesting that just last week I reviewed The Hustler (1961) and its sequel The Color Of Money (1986). It doesn’t always work to revisit characters with films that are 20+ years apart. However, in the case of both The Color Of Money & T2, I did thoroughly enjoy seeing what our much older characters are now up to and I don’t think either film ruined its (admittedly superior) predecessor.

Let’s face it – the Trainspotting sequel was never going to be better than the original. Trainspotting was so of its time and it captured a mood, time & place in a way I don’t think could ever be replicated now. All I wanted was a sequel that wasn’t embarrassing & didn’t ruin the characters as we remember them and I think Danny Boyle has managed to deliver this to Trainspotting fans. I’ve actually been extremely disappointed with some of his films I’ve watched lately (Trance, Slumdog Millionaire) so am very happy to say that this sequel met & even exceeded my expectations. I still like these characters. (Other than Begbie, of course… What an asshole!)

I really like the first film and think it deserves its acclaim for being something quite unique. When I first saw it years ago, it was when I was first starting to really get into films and it was unlike anything I’d ever seen before (and probably one of the most shocking I’d seen at that point in my life). I was also still in America at that point so I suppose it was very foreign to me as well. I’ve only watched it once more since (just after moving to the UK over a decade ago) so, while I think it’s a very good film, I’m not one of its obsessive fans and had even forgotten bits & pieces of it. More than anything, it was the soundtrack from the original that stuck with me (Excellent soundtrack!). I probably could’ve done with re-watching the first before the sequel but, with the help of some flashbacks which I thought were well done, it filled in a few blanks in my mind.

My point is this: I’m no expert or obsessive Trainspotting fan and I’ve never read the books so I don’t feel very qualified in reviewing this sequel. I know I personally enjoyed it and it was great revisiting the characters and seeing them together again (especially Renton & Spud. I’d forgotten how likable Spud was – he’s easily my favorite character in the sequel). This is a more grown-up film and certainly not as intense as the original but it feels “right“. These guys are 20 years older – they’re not going to be exactly the same. However, they still stay true to their characters and, though older and supposedly wiser, still make bad decisions and mistakes. 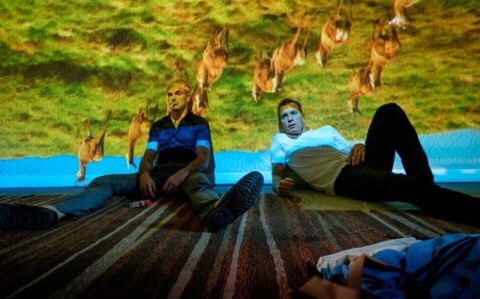 Immediately after watching this, I was mostly curious what fellow blogger Mark of Marked Movies thought of it as I know he’s a big fan of the original (and he’s from Scotland, I should add). He kindly reviewed the original a couple of years ago for my IMDB Top 250 Project HERE (Thanks again, Mark!). I figure that his opinion on this sequel is far more relevant than mine so, if you’d also like the opinion of a big Trainspotting fan, you can read his review of the sequel HERE. It looks like we both feel quite similar about the sequel so Boyle seems to have done a good job keeping loyal fans (as well as casual fans such as myself) happy. Oh yeah – The soundtrack is also okay but it’s not as awesome as the first film’s!