Plot Synopsis: (via Wikipedia)
The plot follows a determined team of American engineers and designers, led by automotive visionary Carroll Shelby and his British driver, Ken Miles, who are dispatched by Henry Ford II and Lee Iacocca with the mission of building the Ford GT40, a new racing car with the potential to finally defeat the perennially dominant Ferrari racing team at the 1966 24 Hours of Le Mans race in France. 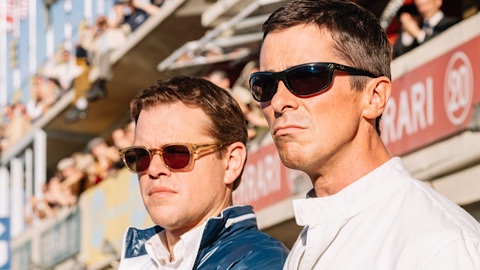 I liked this film a lot. It’s weird – I hate sports but quite often enjoy sports-related movies. Probably because they give the stories the Hollywood treatment, which makes the events more exciting than they were in real life? Maybe. But more than anything I like how they focus on the people and their relationships outside of that sport. I care more about the outcome when I know a little bit about the people who are competing. I felt similar when watching Rush, which was another fantastic movie in this genre. I slightly preferred Rush (possibly thanks to Chris Hemsworth’s butt) but both movies made me care about the characters AND the races. Plus the best part about not being a sports fan? I had no idea who would win any of these races! Watching the final race in this one was intense. I loved it. 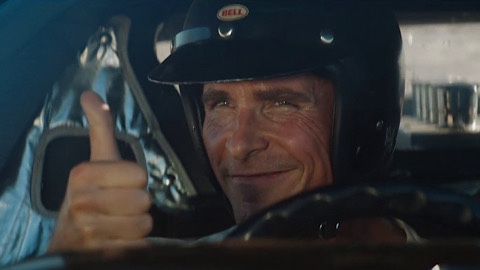 Matt Damon & Christian Bale were both great and I’d be happy to see either of them get nominated for Oscars for these roles. I especially liked Bale and I cannot stand that dude. I think this is the first time I liked him in a movie but Ken Miles was a great & complex character (although I have no idea how accurate this film is compared to the real-life Miles & Carroll Shelby). He was hot-tempered (so probably a piece of cake for Bale) but also very loving with his wife & son. His wife, played by Caitriona Balfe, was also a strong character and I’m glad we got to see him with his family as well as with Shelby as that’s what made us care about him. 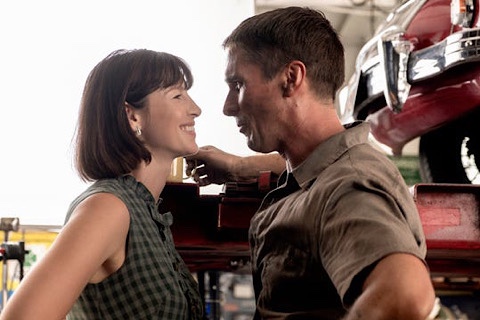 We didn’t see any of Shelby’s personal life, though from what I’ve read it probably wouldn’t have made for as much of a feelgood film so I can see why they focused on Miles and his family instead. With Shelby, the focus was on his career & on his relationship with Miles. As the movie feels more like it’s about Ken Miles, though, I can see it being likely that Bale gets more of the attention during Awards season but Damon was also very good in this – he’s just far more understated.

By the way – I definitely prefer the American title of Ford v Ferrari. It’s weird when they change the titles of movies for other countries. I wonder why they changed it for the UK? I suppose I could Google that if I wasn’t lazy. Doesn’t matter – it’s a good film either way. I’m glad I decided to watch it despite not loving the genre, although it’s a “one-time watch” sort of movie for me.

Plot Synopsis:
Two young boys find a man who calls himself Mud hiding out on a small island on the Mississippi River. They later learn he is a fugitive and question him about it. Mud claims he killed a man who was abusing the woman he loves and he plans to repair a damaged boat that’s on the island then reunite with the woman and escape. The boys agree to help Mud with his mission.

This was quite an odd movie and I think it’ll be a hard one to review. I decided to watch it as it made quite a few end of year Top Ten movie lists done by fellow bloggers.

I think I remember one blogger comparing Mud to Stand By Me which got my interest as that’s one of my all-time favorite movies. Mud isn’t up there with that one but the comparison makes sense in that this is a coming-of-age drama about two boys (of 14, I think). The story focuses mainly on the boy named Ellis, whose parents are divorcing. He also thinks he’s in love with a girl from school so he’s a big ‘ol bag of mixed teenage hormonal emotions. His friend, with the kick ass name of Neckbone, isn’t so much the focus of the film but I really liked him as he reminded me a lot of River Phoenix in Stand By Me, especially with his haircut. Both boys were great and I hope they go on to do more films after this one. They’re what made the movie.

Matthew McConaughey has never really been to my taste (or to many people’s, I think). I did like him in this, though, and I like that he’s been doing more serious roles and seems to be becoming a more highly respected actor lately (Mud is the only one I’ve seen of his more serious roles but I have to admit I liked him in Dazed And Confused as I’m from a small town and I knew a guy EXACTLY like his pervy loser). He’s a mysterious character and you never really know if the boys should fully trust him. 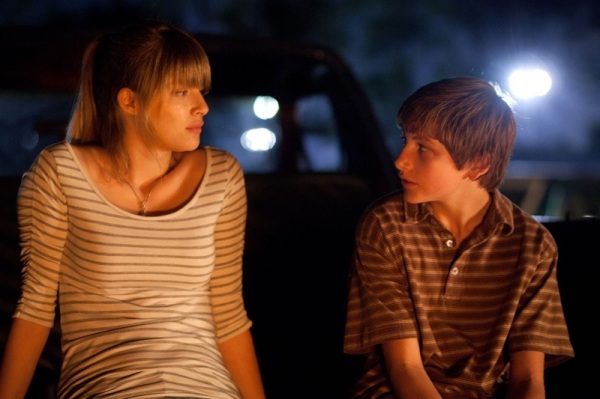 This movie has a slow pace and is more about the characters than about Mud’s story. It won’t be for everyone and I’d only recommend it to those who think they may like it based on what I’ve said so far. McConaughey and especially the two boys give very good performances and you’ll find that you just want a happy ending for them all. The plot itself is quite unique compared to other films and I liked that – it felt like a “fresh” idea even though there wasn’t a lot to it. This movie has the feel of the early 80’s way of life (which I’d totally go back to if I had a time machine) and I actually wondered for a while if this was set in the 80s or if that’s just how things still are these days in Arkansas. I don’t mean that in a bad way – it’s just a very different lifestyle and one that someone living somewhere like London might not be able to relate to but, being from small-town Midwest, it made me a little homesick. Overall, I enjoyed this movie quite a bit and the only weak thing, unfortunately, was Reese Witherspoon who didn’t seem right for her role. Otherwise, I can’t really think of anything bad to say about Mud.