I’ll keep these fairly short. I have 5 more recent films to discuss after these so here are two quickies for two enjoyable movies that definitely won’t be winning any Oscars…

Plot Synopsis: (via Wikipedia)
The story follows a former FBI agent who must rescue his family from a newly built skyscraper, the tallest in the world, after it is taken over by criminals and set on fire.

Yeah, this was silly. Die Hard with extra cheese. I love how when the below poster came out, people laughed at how it would be impossible for a human to make that leap. No shit – it’s that kind of movie. No human could do the majority of what The Rock does in this (and in most of his movies). Sometimes you just have to sit back, eat your popcorn, and enjoy the ride. I laughed out loud a few times at the ridiculousness. But that’s okay sometimes! This is far from “good” but it’s an enjoyable enough disaster movie. It’s better than some & worse than some in this genre. As for Dwayne Johnson disaster movies, I liked it a little less than Rampage but definitely more than San Andreas.

Johnson was the same as always in this. He’s likable in these sort of roles. He definitely has a certain charm going on. I’m not sure when I started liking him? He’s not my type of actor AT ALL. I think it’s because my kid seems to like him & that’s cute. He’s the big action star of her generation like Arnold Schwarzenegger was for mine, I guess. I liked that Neve Campbell’s role didn’t have her being the completely useless wife that needs rescuing. Well, she does need rescuing since she’s stuck in a massive, burning skyscraper that she can’t scale like King Fucking Kong the way her hubby The Rock can! But she’s smart and makes some decent decisions. Their two young kids (a girl and a boy) are adorable (so that you of course want their hero dad to rescue them). 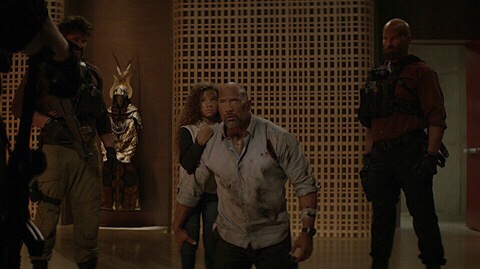 The baddies are cliché but I’d be disappointed if they weren’t in this type of film. And Enter The Dragon once again proves what a massive influence it still has on filmmaking with an over-the-top “hall of mirrors” scene that you know from the start will play a big role at the end (just like when The Rock fixes his wife’s phone – we all saw that coming!). Whatever. This movie was silly fun. And someone at our showing thought it would be funny to go outside & pull the building’s fire alarm 15 minutes before the end, making the entire cinema have to evacuate. But we were allowed back in to watch the predictable ending. Yay. 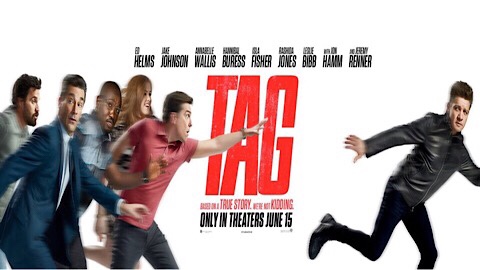 Based on It Takes Planning, Caution to Avoid Being It by Russell Adams

Plot Synopsis: (via Wikipedia)
The film is based on a true story that was published in The Wall Street Journal about a group of grown men, played by Ed Helms, Jake Johnson, Hannibal Buress, Jon Hamm, and Jeremy Renner, who spend one month a year playing the game of tag.

I’ve heard very little about this film but also found it silly yet quite enjoyable. And I love that it’s based on a true story. Seriously! A group of 9 friends have been playing the game of tag since high school (23 years ago). The article about the real guys is fascinating – here’s the link: It Takes Planning, Caution to Avoid Being It by Russell Adams.

Now, there’s no WAY they actually do all the crazy over-the-top stuff that’s in this film (they’d all be dead by now) but they show some clips of the real guys at the end and they do go as far as dressing up in disguise and hiding in bushes to tag each other. The article mentions that they have to instruct fellow employees when the game is on to not let certain people into the building. And a couple of their poor wives have had the fright of their lives when their husbands have been tagged. Crazy! But quite sweet. I like how the game has kept this group in contact for all these years (it’s played every year for all of February – I think it was May in the film). And the film gets the slightly cheesy point of the importance of friendship & “staying young at heart” across quite well at the end. 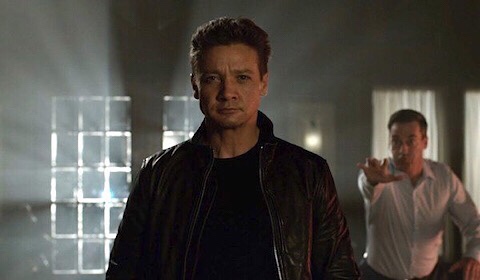 As for the movie itself, it’s funny. I don’t know if it does the true story justice or not, though, as it clearly ramps things up more than it needed to as it’s a pretty fascinating story anyway. Jeremy Renner is the main one they’re all eager to tag as he’s never been “it”. He’s like some kind of crazy ninja assassin, which isn’t very realistic. Hell, one of the 9 real life guys is now a priest! Hilarious. I doubt any of them are ninja assassins. And I doubt any of the real wives are as into the game & competitive as Isla Fisher, who once again plays “crazy bitch”. I think a better film probably could have been made of this story but, if you go into it knowing it’s a great concept that’s had the typical Hollywood exaggeration treatment, you should have fun with it. It was a good day out for the hubby & me as I think we needed a simple film to de-stress that day.

Oh! Tag had a great soundtrack too. Mostly old school (well, 90’s) hip hop with some Ozzy, Danzig & Pixies thrown in. So that helped our enjoyment as well. Here’s a sample of A Tribe Called Quest & The Pharcyde in this film…