As today is her birthday, I figured I might as well get my Blind Spot review of Atonement out of the way. I didn’t like it.

Based on Atonement by Ian McEwan

Plot Synopsis: (via IMDb)
Fledgling writer Briony Tallis, as a thirteen-year-old, irrevocably changes the course of several lives when she accuses her older sister’s lover of a crime he did not commit.

These are the 2018 Blind Spot films I’ve watched so far, from least favorite to favorite:

Yeah, Atonement is last. This is my third year of doing this Blind Spot thing (my previous two years of lists are HERE) and Atonement may be my least favorite overall. I take that back – it’s probably The Last Temptation Of Christ.

Atonement is certainly not a bad film in any way and its cinematography was beautful. However, I found it boring and, worst of all, I hated the characters. I suppose my irrational dislike of Keira Knightley may be partly to blame (Sorry Keira Knightley – I hope you have a good birthday anyway!). She recently said something along the lines of only wanting to be in these period dramas now because women are always being raped in modern movies. Fair enough – that’s something I hate being thrown into films for no good reason. But did she forget about the entire central plot of Atonement?! Sheesh. Actors are so annoying. And I’m sorry if that’s a major spoiler – the rape is pretty early on in the film. I just found that to be a stupid comment, especially as there have been some very strong female characters in modern movies these last several years who’ve not been raped. Maybe she should watch more movies?

So, this is the movie that got the young Saoirse Ronan noticed with an Oscar nomination. She’s very good in this, although her character is a hateful little brat at first. But she grows & she learns. I’m guessing this was better portrayed in the novel. She clearly is forever remorseful over ruining two people’s lives with her lies but it still didn’t feel like she truly suffered as she should have. At least, she certainly didn’t suffer as much as her sister & her sister’s lover (Knightley & James McAvoy). 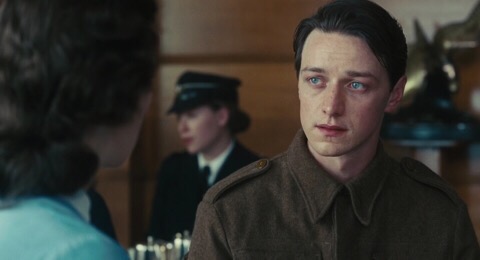 Knightley & McAvoy were both very good as well, although I always find that Knightley comes across as very “cold”. Man – I’m really sounding like I hate Knightley… Sorry! I did prefer McAvoy and felt genuinely sorry for his suffering at the hands of that little shit played by Ronan.

Okay, I admit that this is a good movie and the problem is that it’s just not my type of thing. The acting, the score, and the cinematography were all strong and the story itself was good even though I found its execution odd (in the beginning, they keep going backwards & redoing scenes from different perspectives and it felt clunky & just annoyed me). There’s also a scene involving a letter that isn’t explained well and I didn’t know what the hell had happened until I read a full plot synopsis. The second half of the film luckily didn’t do the weird jumping around thing (from what I remember) but that just made things feel inconsistent. 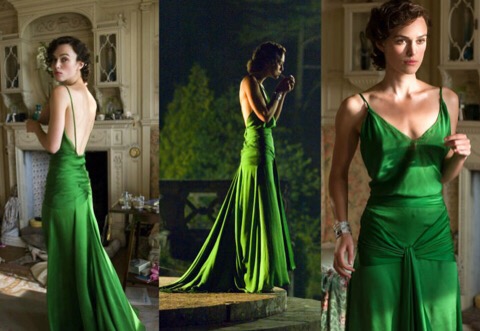 *This dress was gorgeous

FYI – Knightley is okay with the C word being used in a movie! As long as it’s a period drama. 😉 I just happen to prefer this kind of period drama to the Knightley kind. I hated every character in this movie (other than McAvoy’s) and I usually don’t enjoy a film when that’s the case. The odd storytelling style also didn’t help. Maybe I’d have liked the book more, as I do think it’s a good story & I always like stories that span so many decades. Don’t skip this movie if you think it’s your type of thing. It’s just not mine…