Plot Synopsis: (via Wikipedia)
The film is set in 1969 Los Angeles, where an aging television actor and his stunt double and longtime friend navigate the changing Hollywood film industry. 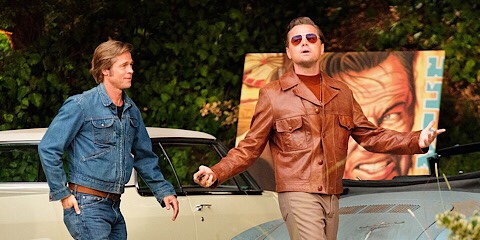 I never got around to reviewing this as I saw it a few weeks ago while on vacation in America. It’s a very good film. Yes, it’s probably one of Tarantino’s best films overall. I can’t say I loved it, though. In fact, I was a tiny bit bored and very much felt its 2 hour and 41 minute running time. But I’ll be honest: I was a little bit on edge the entire time, which probably didn’t help my enjoyment.

It was great being back in America for the first time in over a decade. I was in a super comfy reclining seat, which seems to be more of a “standard” thing than in the U.K., and I was thoroughly enjoying the superior (and, holy shit, one free refillable!) American popcorn. However, the main things running through my mind for almost three hours were “I wonder how many people in here have guns on them” and “There will be more guns in this showing than in other movies since we’re watching a violent Tarantino film” and “I’m the closest one to the door so very likely to be the first one shot if someone comes in and starts shooting“. Is this what daily life is like for everyone living in America now? 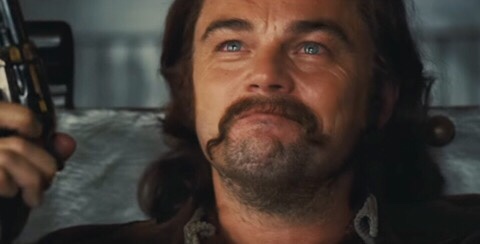 Don’t worry – I am NOT about to get into any sort of political discussion. That’s not me. I just want to joke around & chat with people on my blog about my nerdy love of movies. It just made me long for a more simple time as I do have some great memories of growing up in America and will always see it as my home. Which brings me back to the actual topic: I did appreciate Tarantino’s obvious love for the era of Hollywood depicted in this film. The nostalgia he feels for it really does show through and I could relate to that feeling as I sat there, in the country I spent the first half of my life in, feeling nostalgic about how things used to be and knowing they’ll never be that way again. Also, who wouldn’t like to rewrite some of their own personal history, right? I’d like to write some happier endings to a few things from my past.

I think this may be one of my reviews where I decide by the end of the review that I liked the movie more than I realized… This is why I keep this blog going even though I don’t think anyone reads it anymore: I’m sometimes able to sort my thoughts out on something as I write about it. Yes, I think Tarantino did a good job evoking the mood of that late sixties going into early seventies movie star & movie making world. As a lover of film, I always enjoy movies about filmmaking & that lifestyle. And what I was afraid would be the “central event” of the film but thankfully wasn’t (I won’t use the person’s or the “family’s” name), I guess maybe to Tarantino that event symbolized the loss of innocence and a more simple time in not only the types of movies being made but also in what it was like to live in America. So I’m starting to understand his “rewriting of history” in some films. It’s fun to think that, if we could erase certain events from history, maybe the world would be a different & better place. That’s the whole point of movies for me personally. I like the escapism and Tarantino clearly does too. His escapism just involves waaaaaaaaaay more violence than mine would!!

Okay, I’m now deciding that I liked this movie more than I realized. Although I was clearly a bit distracted while watching it, my experience was probably quite unique since I was in the position to be feeling the same sense of personal nostalgia that Tarantino was trying to convey in this film about a time he clearly misses as well. My main issue with the film is that the overall story is weak. The dialogue also isn’t as strong as in Tarantino’s other films in order to make up for the lack of story and the movie seriously drags in places, especially at the beginning (I kind of forgot that Al Pacino was even in this – I had a very hard time getting into the movie at first but I was busy scanning the audience for guns).

However, I think my old Brad Pitt crush has been renewed. Pitt is brilliant in this and the true star of the film. Don’t get me wrong – Leonardo DiCaprio & Margot Robbie were also fantastic. DiCaprio gives his usual best and has to do more serious “acting” than Pitt but we’ve seen Leo do this sort of role so often now. Leo is one of the finest actors of our time, yes, but Pitt has the true charisma in this film. He embodies the old school “Hollywood star” vibe from the era that Tarantino is portraying, which is fun as he’s just the stunt double to Leo’s fading movie star character. 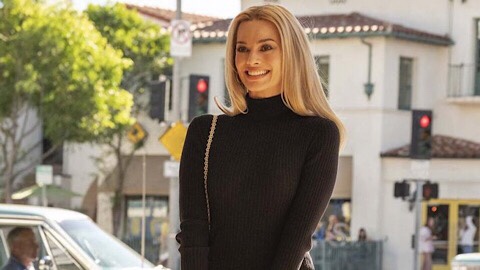 As for Margot Robbie, she’s thoroughly charming as Sharon Tate and, like Pitt, also very much has that old school “Hollywood star” vibe. It’s a fairly small role, however, which I think was the right move for this film despite people moaning about the “female role” being too small. What happened to Tate and the others was horrible and tragic and, thank god, is not the focus of this film. That story is a backdrop and not glorified or dwelled upon, which is why I think her scenes were kept more simple and less likely to be disrespectful in any way. Unlike the Bruce Lee scene, unfortunately – I can see why his portrayal upset his family and fans although I can also understand that this is an “alternate history” thing and I don’t think Tarantino meant to cause offense with that bit. Enough with women’s bare feet, though, Tarantino!! We get it. You like feet! Most people don’t. We don’t want to see feet. Please stop with the feet.

Okay, I’ve rambled on enough considering that I didn’t even know how I felt about this movie at first. I loved its mood and its setting and absolutely loved Brad Pitt. I enjoyed DiCaprio & Robbie. I hated the “family” (but I suppose that’s the point – I just could’ve done with less time being spent on them). I disliked the bare feet. The story dragged. It was too long. There were fun cameos (as usual). I really liked the ending, which I’d accidentally had spoiled beforehand and wasn’t sure how I’d feel about it. I liked that this was less violent overall than Tarantino’s other films. To be honest, this is Tarantino’s most “feelgood” film and I liked that I was able to walk away from a Tarantino movie feeling a bit more uplifted and less stressed than I usually do after leaving his films. It’s funny that the only stress I felt this time was the real life environment around me but I’m happy to have experienced this movie in my home country, which gave me a more unique perspective. Hell, I don’t know… I think this movie is a bit all over the place and I’ve never felt quite so confused as to if I truly enjoyed a Tarantino film or not. Maybe it IS a damn masterpiece like so many are saying. There’s a messy sort of brilliance going on and I wouldn’t disagree with those who loved it even though I can’t say I feel the same way. However, I think it’s one that will age well and, over time, is likely to be more highly regarded than a lot of Tarantino’s other films. 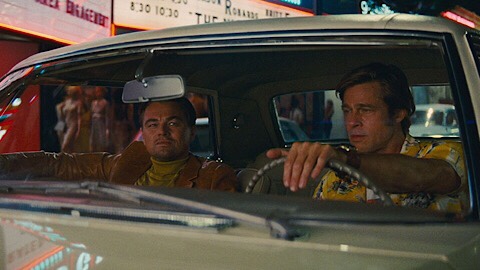 **I’ve added Once Upon A Time… In Hollywood to my ranked list of films directed by Quentin Tarantino HERE. I really didn’t know where to put it and still might change my mind. I’m contemplating moving it up one space as it’s admittedly a much better film than Jackie Brown but, man, I love that damn soundtrack so much…

Also, I’m really busy at the moment and don’t know when I’ll get a chance to do my monthly movie roundup post. So, for now, here’s the ranked & rated list of all the movies I watched in August (six while on airplanes!). I’ll try to do at least mini reviews of these at some point but most were very disappointing anyway. I’ve starred the airplane movies (sad, I know – but it’s so I remember when I read this ten years from now). 🙂