13 Reasons Why is a new young adult TV series being released on Netflix this Friday (March 31st). There will be 13 episodes (all available on Friday) and the show is based on the novel Thirteen Reasons Why by Jay Asher, in which a teenage boy receives a package containing audiotapes recorded by a classmate who has recently committed suicide. The show was directed by Spotlight’s Tom McCarthy & produced by Selena Gomez. I read the book recently so figured I should review it before the show airs. Here’s my review… 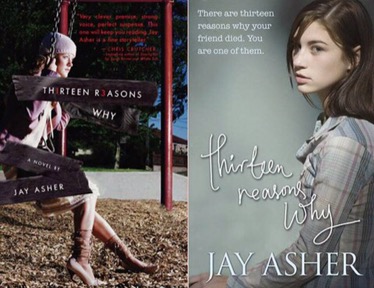 Thirteen Reasons Why by Jay Asher

What It’s About: (via Goodreads)
Clay Jensen returns home from school to find a strange package with his name on it lying on his porch. Inside he discovers several cassette tapes recorded by Hannah Baker–his classmate and crush–who committed suicide two weeks earlier. Hannah’s voice tells him that there are thirteen reasons why she decided to end her life. Clay is one of them. If he listens, he’ll find out why.

Clay spends the night crisscrossing his town with Hannah as his guide. He becomes a firsthand witness to Hannah’s pain, and as he follows Hannah’s recorded words throughout his town, what he discovers changes his life forever.”

I’m not entirely sure how to feel about this book. I’ll say it was very “readable”. I usually take a good few weeks to read a book (due to lack of free time) but this was a quick & easy read plus I found that I really didn’t want to put it down as I was truly curious to see how it would end (I read it over a weekend). It’s an uncomfortable subject matter, however, and I still don’t know if I feel right about how it was handled. Plus, the below trailer for the TV show makes it look almost like an “exciting mystery”, which I don’t think is necessarily a responsible way to market the story. I guess we’ll see how the show unfolds. This IS a book about suicide. The only “mystery” is why the girl did it, which she explains in her audiotapes. The trailer’s mood just feels a bit off to me.

I’ll say this is very much a teen book but it didn’t feel immature or like the author had dumbed it down for its target audience. My teenage years are far far (far!) behind me but this book feels like it was written in a way that would seem genuine & relevant to a modern teen. I know nothing of the book’s success but I would imagine that current teens can relate to it whereas I feel that certain other young adult books are too obviously written by authors whose teen years are far far (far!) behind them. Okay, yeah – I’ve just looked up the author (Jay Asher) and he’s my sort of age. I also think that he did a good job with the character of Hannah Baker, the girl who commits suicide. It can’t be easy for a middle-aged man to capture the feelings of a teenage girl but I think he did well with her character (probably even better than with the main male character, Clay Jensen).

I’ll of course avoid major spoilers but the main moral of this story is to treat people with kindness and to be aware of the signs to watch for that may indicate that someone is suicidal. I of course agree with this message and would love to think that this book could save some lives but, well, I don’t think the world works that way. If anything, it worries me that this story could play into the rather typical teenage thoughts about suicide: that whole “this will make people notice me & understand what I was going through” thing. No. The bullies, etc? They didn’t care beforehand & they wouldn’t care afterwards. I hope no one thinks that because of this book. However, from the other point of view, who knows? Maybe it would help some teens to notice the warning signs & perhaps offer someone some help. Maybe. The nice ones. (Is it obvious that I thought a lot of the people in my high school were uncaring assholes?!)

I admit that Thirteen Reasons Why was a bit of a page-turner, even if the subject matter left me feeling uncomfortable. Clay listens to several cassette tapes from Hannah, each focusing on a different classmate & the role each person played in her final decision. This meant we were told several stories as Clay listened to each tape, which was an interesting way to set up this novel. Hannah Baker was a well fleshed-out character though, interestingly, kind of hard to like. Maybe that was partly the point… Due to various incidents, she turned inward so I suppose she was kind of ignored. Clay Jensen comes across as a little less genuine but I think this is due to his seeming so simple in comparison to Hannah’s complexity. Overall I’d probably recommend this book to anyone who likes young adult fiction and who is emotionally stable. But I wouldn’t necessarily want anyone who is anything like Hannah Baker’s character to read it…