Last weekend, I tried to catch up on watching some Oscar nominees. Of the Best Picture nominees, I’d already seen Mad Max: Fury Road (awesome), Room (amazing), and The Revenant (pelts!). I went to Spotlight & then what I really wanted to see was The Hateful Eight but it was sold out & I was stuck having to go to The Big Short instead. Were Spotlight & The Big Short worth my time? Let’s find out. I’ll review Spotlight today & The Big Short on Wednesday. 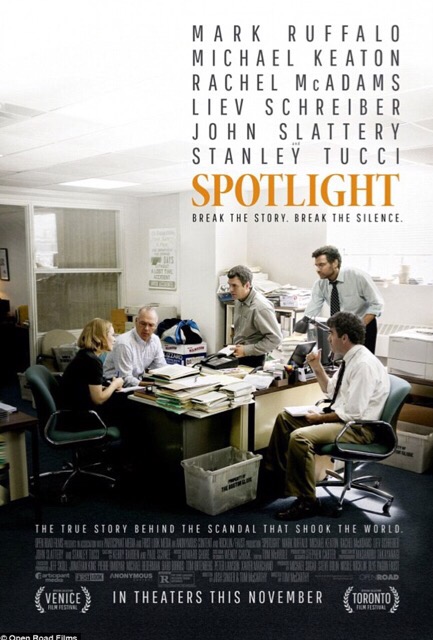 Plot Synopsis: (via Wikipedia)
The film follows The Boston Globe’s “Spotlight” team, the oldest continuously operating newspaper investigative unit in the United States, and its investigation into cases of widespread and systemic child sex abuse in the Boston area by numerous Roman Catholic Priests. It is based on a series of stories by the real Spotlight Team that earned The Globe the 2003 Pulitzer Prize for Public Service.

Yes, Spotlight is a good film. It’s very much “Oscar material”, so I can understand why it’s up for awards. Is it the BEST MOVIE EVER?? No. Is it one of those Best Picture nominees that people will barely remember ten years from now? Hmm. Yes, I think so. Sorry. It’s pretty much your typical “serious true story” made into a Hollywood drama just in time for Oscar season. I mean no disrespect to the unthinkable true story behind this film but, judging it just as a film as opposed to the topic the film covers, it’s indeed a solid piece of filmmaking but is certainly not up there with some of the absolute classics that have been nominated for Best Picture in the entire history of the Oscars.

But, yes, it’s at least worthy of a nomination (for Best Picture – not so much for the acting categories). Sorry to start out sounding so negative – I promise that I have nothing bad to say about this movie from here on out (I’ll save my negativity for my next review). I’ll talk about all the things that I thought were good about Spotlight. There’s honestly nothing at all bad about it – I think my negativity is aimed more at the Academy being so out of touch with the general public nowadays. But I’m getting ahead of myself again – that complaint belongs in the review I’ll be posting on Wednesday. I apologize to Spotlight – I think it’s just unfortunate that I saw it on the same day that I saw The Big Short! 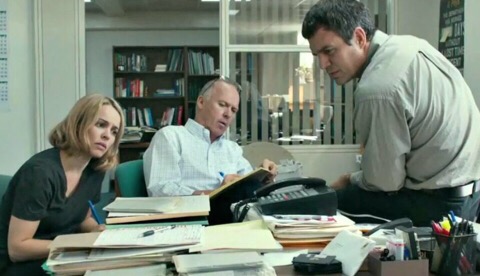 Spotlight takes a serious issue and, thankfully, doesn’t exploit it. Movies based on true stories can often take things too far down that tearjerker, emotional DRAMA(!!) route and quite often end up feeling insincere. The story focuses mainly on the Spotlight team of investigators as opposed to the actual victims of sexual abuse by their priests and I think that was the best way to approach telling this story. We don’t need to see the abuse or get specific details – just knowing that such a thing could happen and that it was so widespread is bad enough. It disgusts me that adults in a position of trust can betray children in such a horrible way. But back to discussing the movie itself, not the topic it covers…

I liked this film’s approach as I’ve never been a fan of over the top melodrama and I think the quiet & subdued performances in this are much more realistic. However, it also felt like any professional actor could have played any of the roles in this film so I’m quite surprised that both Mark Ruffalo & Rachel McAdams are up for acting Oscars. I don’t think they have any chance of winning. It’s not because they’re not both good in this (they are) but these just aren’t exactly defining roles. Actually, the best performance here may be from Stanley Tucci in a small role. 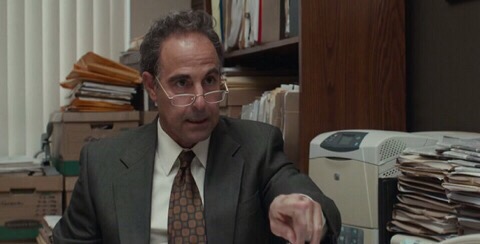 I think the Academy too often confuses “worthy topic” with “good filmmaking & acting”. But a lot of what I’m saying may also be down to my own personal preference – I like a worthy film now and then but I most often watch a movie for escapism so will almost always choose sci-fi, fantasy, etc, over a dramatic true story. The story behind this film is a very important one so it’s great that they did a Hollywood film about it as that’s (sadly) sometimes the only way the public becomes fully aware of a certain topic. But, for me personally, after watching movies like these I often feel like I’d be better off just watching a documentary (if one exists) instead of the Hollywood version of true events. Spotlight is a good film, though, and most certainly one you should watch if you like the genre and want to see how they’ve handled the story.