I was thinking I may not be able to do this list as I may struggle to find ten De Niro movies that I’ve seen. Ha! I’ve seen 29! How did that happen?! Sheesh – he’s been in loads of films. Took me ages just to type out the biggest ones I’ve seen & not seen.

I like De Niro but I’m not gonna pretend he’d make a top ten list of my favorite actors. Of the two, though, I’ve always preferred him to Al Pacino (I’ve only seen 14 of his movies).

As always, I’ll include a list at the end of some of the biggest De Niro movies I’ve not seen. And there are truly some biggies! As for Taxi Driver, it’s a bit like Rocky was for me until I finally watched it all the way through this year for my Blind Spot thingy: I’ve probably seen most of Taxi Driver from seeing bits & pieces over the years but can’t really include it on this list until I fully watch it properly.

I do want to see Once Upon A Time In America & The Untouchables (Maybe I’ll make them Blind Spot 2018 choices!). I have no desire to see Casino as it sounds too violent for my wussy self. And I have a feeling I may get yelled at for Raging Bull not making my Top Ten… 😉

So, of what I’ve managed to see so far, here are My Top Ten Robert De Niro Movies (ranked by movie, not performance): 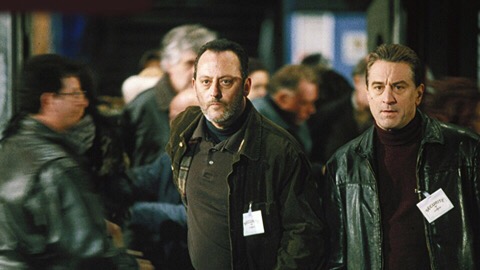 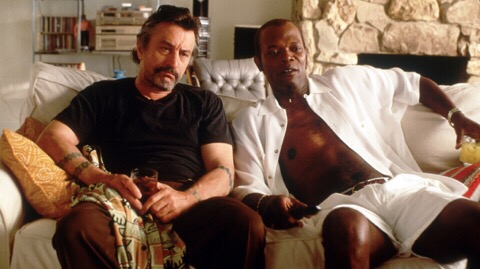 Today’s IMDB Top 250 Guest Review comes from Mark of Marked Movies. Thanks for all the reviews, Mark! 🙂 Now let’s hear what he has to say about The Deer Hunter, IMDB rank 134 out of 250… 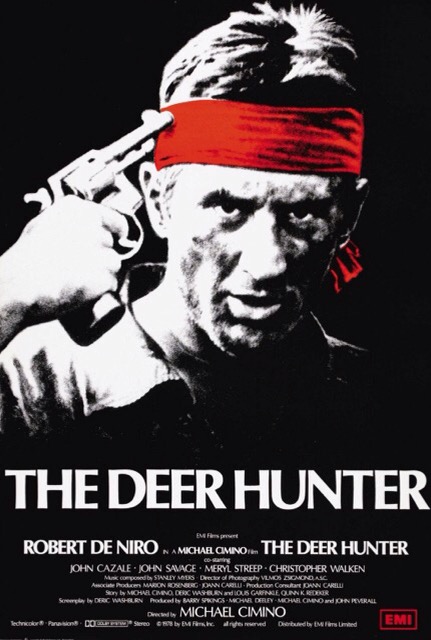 Released in 1978, only three years after the official end of the Vietnam war, Michael Cimino’s “The Deer Hunter” seemed as if it may have been too soon for the American psyche. It was a surprising box-office hit but was also one of the most controversial, major theatrical releases about America’s involvement in the war. It went on to receive 9 Academy Award nominations (winning 5 – including Best Picture and Best Director). Despite this, the backlash was pretty vehement. It received criticism from the likes of Jane Fonda and John Wayne – who in his last public appearance had to present it with it’s Best Picture award even though he wasn’t fond of the film. These criticisms came in many forms but for as many critics as it had, there were also a great number who considered it to be another American classic.

Michael (Robert DeNiro), Stevie (John Savage) and Nick (Christopher Walken) are among a group of friends who live and work in the steel mill town of Clairton, Pennsylvania. They spend their time getting drunk and going deer hunting before they are enlisted in the airborne infantry of Vietnam. What was once a slow-paced and fun-filled life is shoved into the stark reality of warfare and how their experiences change their lives forever.

Clocking in at just over three hours, “The Deer Hunter” is a film of length. However, it’s one that never overstays it’s welcome as Cimino wisely works within a three act structure – book-ending the war with marriage and death. He may take his time and linger long on shots but it never gets boring. To view it as simply another Vietnam film is to entirely miss the point also. If it is to be viewed in any way, it should be as a commentary on American disillusionment and it’s loss of innocence at this time. It’s intention is not to focus on the war itself but on the aftermath and the impact war can have on the lives of ordinary working people. In fact, the scenes that take place in Vietnam only amount to a very small portion of the film, overall. Ultimately, it’s a character study that’s only heightened by the 50 minute wedding sequence at the beginning of the film. Many grumble about this being too indulgent but it’s integral that we get to know these characters in order to fully understand them. It’s during the wedding reception that they come across a Green Beret who has just finished his Tour of Duty; they buy him a drink and take offence when all he has to tell them about the war is… “Fuck it!“. This perfectly sums up the naïveté of these young men as they seem to have a romanticised idea of war and have absolutely no idea of what is to become them.

Following this, a bunch of them go on a deer hunting trip where we again see the dynamic of the group and get to know each of them more personally. Suddenly, we are thrust into the chaos of Vietnam and it’s not before long that the films iconic and controversial Russian roulette scene takes place. This is a scene that has received much criticism in not only being claimed as inaccurate – as there was no evidence to suggest that any such atrocities took place during the conflict – but for being racist in it’s sadistic stereotype of the Viet Cong captors. These criticisms are justifiable to an extent but, personally, I think the critics have taken it far too literally. If viewed as a metaphor for the senselessness of war and the inhumanity of man during wartime struggles then it’s entirety fitting to the films themes and says more about an initiation into manhood. It was literally minutes before this powerful scene that DeNiro’s Michael and Walken’s Nick were discussing how a deer should be killed with “one shot” and now (ironically) they must face a similar fate. This game of chance is the catalyst that changes the dynamic of the three principle characters (the other being John Savage’s Stevie) and further adds to the character development that was so playfully and innocently displayed in the opening wedding sequence or the camaraderie of the deer hunt. It’s purpose is not to be racist but to capture the extreme pressure that soldiers face in conflict. In the film’s final act, some of them return home only to realise that they’re traumatised as they struggle to fit back into society. There have been claims that it doesn’t take an overly pro or anti stance towards the conflict but I struggle to see how. This was one was of the first films to challenge the perspective on Vietnam. The likes of Oliver Stone’s “Platoon” and Stanley Kubrick’s “Full Metal Jacket” were praised for such honesty and I believe this deserves the same credibility.

“The Deer Hunter” is, undoubtedly, epic filmmaking and despite your political interpretation, there’s no denying the power of it’s emotionally devastating narrative. It’s unlikely that Cimino will be able to deliver a work of this magnitude ever again. He tried (and many would say failed) in 1980 with “Heaven’s Gate” (bankrupting United Artists Studios in the process) but his scope and ambition here deserves the utmost respect. So too does the work of cinematographer Vilmos Zsigmond for his astounding ability to capture both the expansive landscapes of Pennsylvania and the war ravaged mountainous villages of Vietnam. The actors are also very strong and committed throughout. This would be the last performance of the great John Cazale – before his untimely death to cancer – and the first notable one from Meryl Streep, who brings a touching vulnerability to her supporting role. Walken (who won a Supporting Actor Oscar) is a marvel and deservedly made a name for himself in the process. As good as they are, though, it’s DeNiro who anchors the film in a enigmatic display of stoicism. Another deserved Oscar nomination came his way and even though this is a film that many omit from DeNiro’s plethora of magnificent performances throughout the 70’s and 80’s, it happens to be one of his strongest and most unsung. DeNiro apparently described his role as one of the most physical and exhausting that he’s ever done, and it’s easy to see why; the emotional, physical and mental abuse that he seems to be suffering is perfectly and gruellingly displayed onscreen.

The 1970’s are well known for producing some of the finest experiences in cinema and “The Deer Hunter” can, proudly, consider itself one of them. It’s marvellously structured, harrowingly vivid and so grand and ambitious that it thoroughly deserves it’s epic status. Truly one of the best of it’s decade.