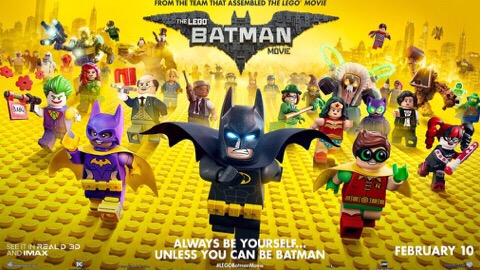 Plot Synopsis: (via IMDB)
Bruce Wayne must not only deal with the criminals of Gotham City, but also the responsibility of raising a boy he adopted.

The LEGO Batman Movie is easily my favorite 2017 UK release so far! Well, okay – it’s only February and I’ve only seen three other movies (La La Land, T2 Trainspotting & Split). But I’m sure it’ll be in my top ten at the end of the year. It really cheered me up after a crappy day at work – it’s lots of fun and the humor is genuinely funny. And I mean an “all ages” funny – this is one of those movies I’m sure plenty of adults without kids are wanting to see as well. Go to it! You’ll like it no matter what your age, especially if you’re a superhero fan. Although you don’t really have to be a superhero fan, either – I’m a very mild one. In fact, I’m so superheroed-out that I went to, I think, only one of the superhero movies released last year. I didn’t go to that Batman/Superman thingy! I’m pretty sure The LEGO Batman Movie is superior to that anyway from what I’ve read. 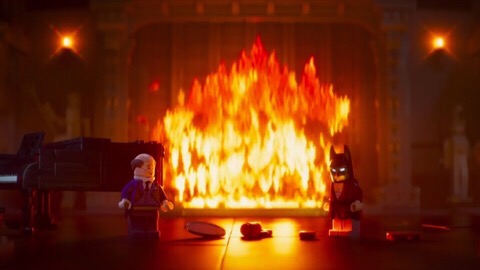 I absolutely loved the first The Lego Movie, which I re-watched with the kid again this week. I thought that was one of the best family movies in recent times and it somehow actually manages to still go up slightly in my estimation anytime I see it. This LEGO Batman “sequel” follows a similar sort of hero’s journey narrative and delivers another great message in a thoroughly entertaining, funny, and non-preachy way. I still adore the message from the first film and, while this second film is much more obvious with its straightforward message and the story isn’t quite as “deep” or as uniquely told as in the first film, it’s still a wonderfully written film and so much better than the majority of mindless kids’ films that get made with only cheap laughs and cheap toys in mind. Crap like Trolls! What’s the message in that? Be happy no matter what! Tra la la, stupid happy songs, don’t think for yourself, don’t have emotions…

I also want to emphasize the “non-preachy” message thing, as I get so thoroughly annoyed by preachy kids’ films (I seem to have a very unpopular opinion on Zootopia but I sincerely felt that it rammed its message down our throats. Plus, the film was just boring so that didn’t help). These LEGO movies, like the Pixar films and most (not all) Disney films, get the perfect balance. It feels like the focus is first & foremost on telling a good and entertaining story, which ultimately does a better job in getting its point across anyway since any message it may have doesn’t feel forced.

I suppose I should end this review by actually talking about the movie in some way?? I don’t do that a lot anyway since I like to avoid spoilers and prefer to just discuss my feelings about a movie. What can I say? I thought the jokes in this were genuinely funny (almost as funny as in the first film). “Clever” funny. I’m very picky on comedy and like very few adult films in the comedy genre. Why is the best, most well-written comedy in films nowadays in these so-called kids’ movies? The LEGO movies (and everything made by my beloved Pixar) put all the immature, silly, live-action “adult” comedy to shame. Are adults idiots or something? Considering that our cinema screen was nearly empty when we went to see this while queues were going out the door for that new Fifty Shades movie, I’m thinking that must be the case.

I can’t help but compare this to the first LEGO movie, of course, but to say it’s not quite as good as that one isn’t really an insult as that’s a hard one to live up to. Batman himself is great but the rest of the characters are a bit weak in comparison. The focus is on Batman’s relationship with each of these people, though, and this is done really well. You gets loads of fun pop culture cameos (Gremlins & a Twilight Zone reference put a big goofy grin on my face) and I know there are plenty of superhero in-jokes that I’ll have missed but that hardcore fans will love. I saw so many “dads” alone with their kids at this one and I’m sure they loved it as much if not more than their kids. I like to pretend that those dads’ wives weren’t next door at Fifty Shades… This is why I don’t get along with many other women! Do any girl bloggers out there who prefer LEGO Batman to Fifty Shades want to be my friend??. 😉

The story itself is, well, a pretty standard superhero storyline. But better. I wish more live-action superhero movies were half as good as The LEGO Batman Movie. This film is more lighthearted and “fun” than the first one but it still has a fantastic message and put as big of a smile on my face as on my husband’s and, most importantly, our daughter’s. Well, maybe slightly bigger smiles on ours. But her generation of kids are gonna be great adults thanks to growing up on good movies like these and like those made by Pixar. This generation of kids are gonna save the world! They’re gonna be better adults than all the current idiot grown-ups! If we all live that long. Hmm. This review took a dark turn. Kind of like the death metal songs written by LEGO Batman.